55. Firetails Against the Odds 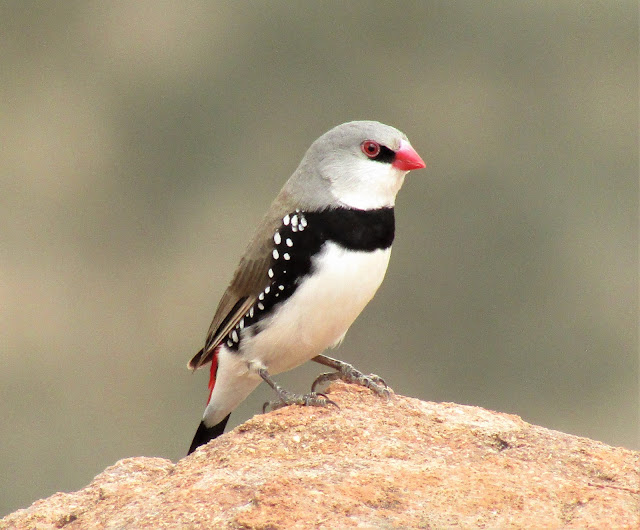 This is a Firetail. My neighbour Neil calls them Diamond Sparrows.


The paler grey finches are not long out of the nest. 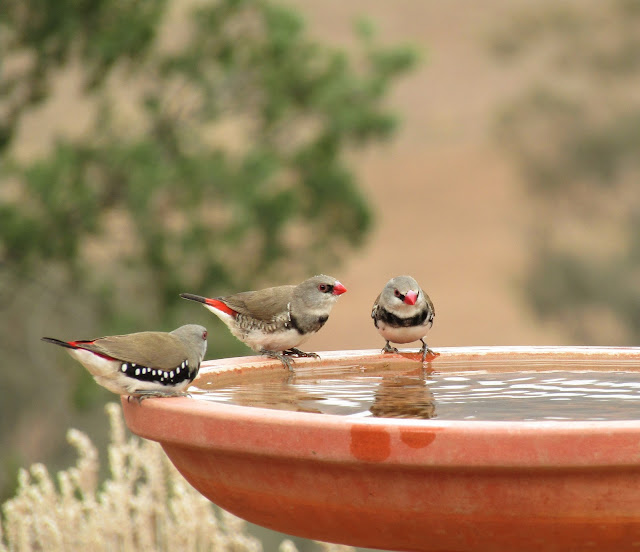 Their black chest bars haven’t come in yet. 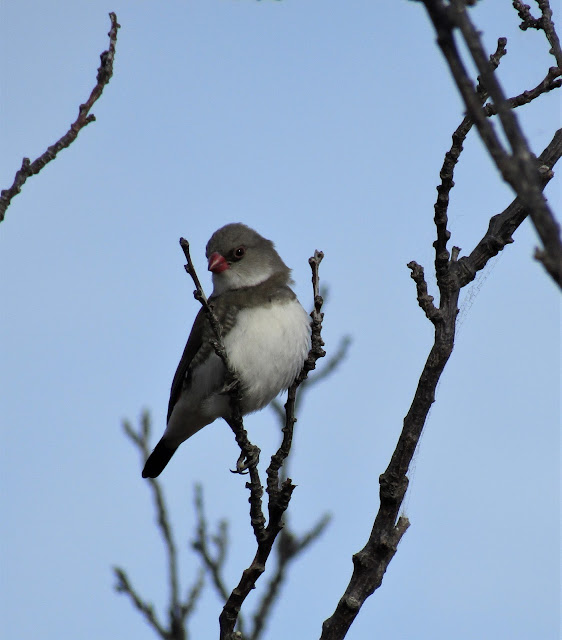 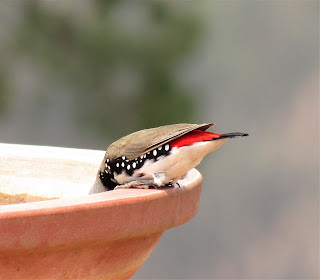 The fledglings don’t have white wing-diamonds.

They don’t have quite the same fiery tail that flashes red when they fly away either.

Social birds, they live in groups of up to 150. 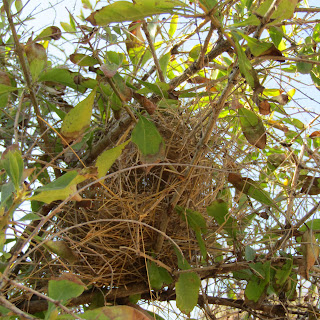 There are at least 70 diamonds at the house; they’ve been breeding continually.


The real nest is a huge woven funnel. Both parents feed and sleep inside it with the hatchlings.

I read in a birding book that Firetails can attempt to fledge 2 broods in a good rainy spring season.

Whoever wrote that got it wrong, or else the Diamond Sparrows have  adapted to 3 years of drought.

Meant to be showering and getting ready for work, I spotted an adult picking up, considering and choosing a feather. It tried 4 before it found one it liked enough to take back to the nest. This photo was taken at the start of winter, though they aren’t supposed to breed until August. 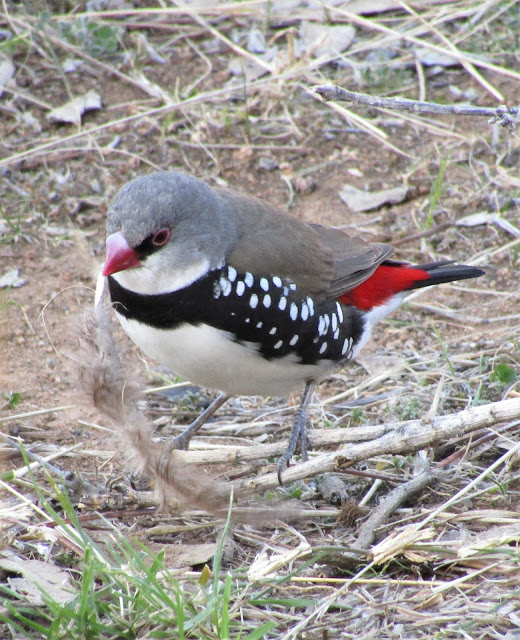 Walking around our orchard at the end of May, a Firetail almost scalped me. I felt the wing beats above my head after going too close to its plum tree nest.

Firetails hide out in a thicket of Wonga Vine a few feet from the birdbath. It’s where they cram into communal sleeping nests for group protection. 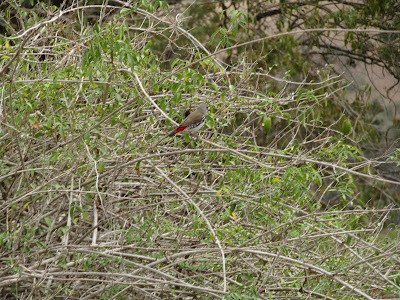 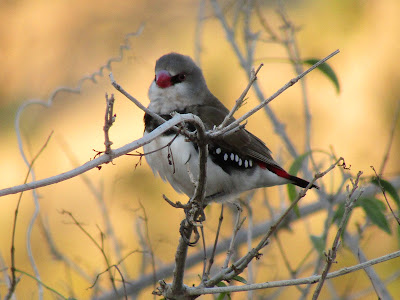 This month the plant is almost bare of leaves, leaving Firetails exposed on their favourite roosting spot. 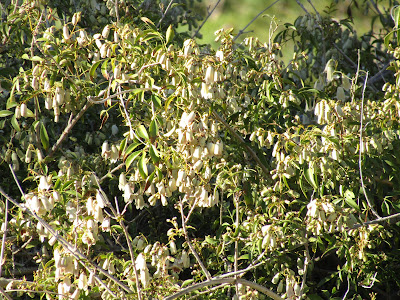 This is what the vine looked like covered in bell-like flowers in August 2016.

There were hardly any flowers in my garden last spring. 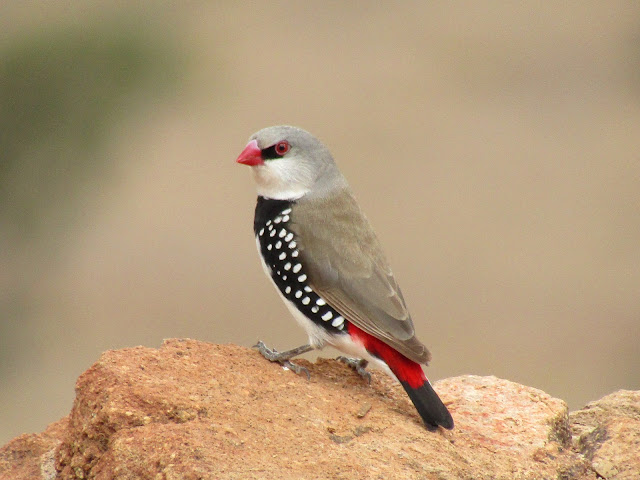 It was a warm to hot and dry autumn, followed by a cool to warm and dry winter. All followed by the driest spring since records began 120 years ago. The last 3 months were also the second hottest we have ever had. People in the UK can’t fathom an entire season without any substantial rain, but it happened last year as well.

That any creature so dependent on living next to water can survive such catastrophic weather is amazing. That they continue breeding for all the warmer months of the year is miraculous. 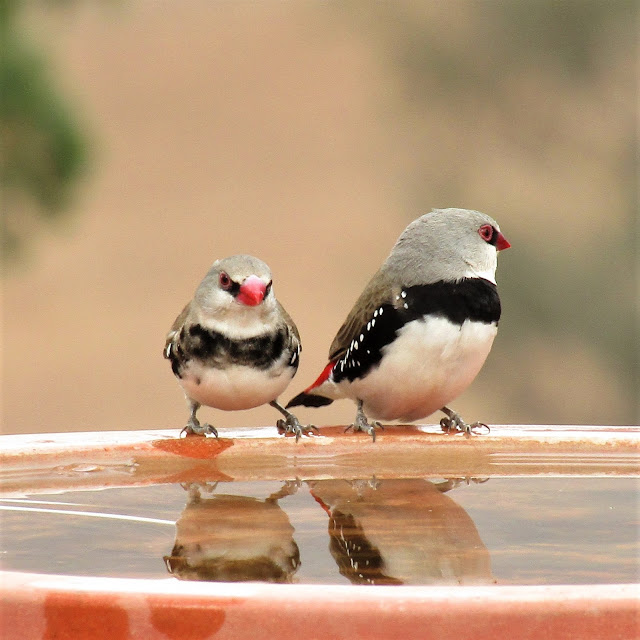 In this photo taken last week, a parent Diamond Sparrow guards a fledgling in its first week out of the nest. 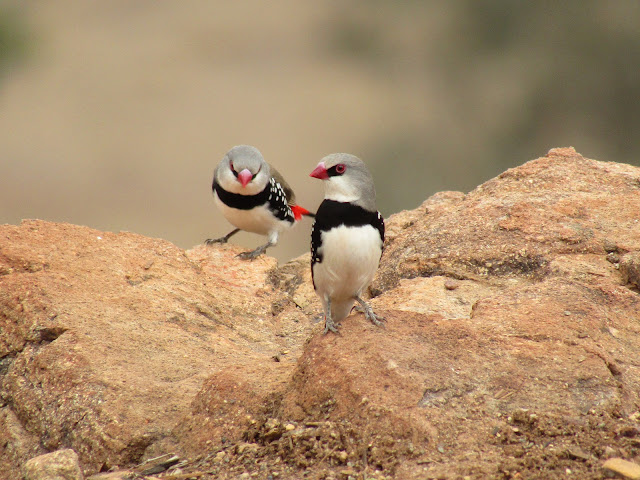 Finches breeding for 5 months in Australia’s worst drought ever? 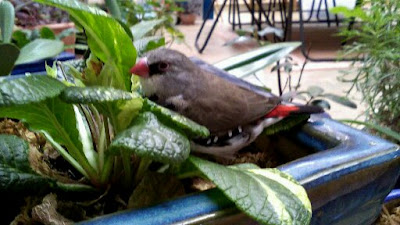 I picked one up after a window strike once. I felt the soft belly feathers nestled in my cupped hand. As I brought it inside, the weight didn’t register. At less than 12 grams they’re almost lighter than air.

I filmed finches being blown about. Feathers ruffled, doing their best to stay upright and not slip off, they are Little Aussie Battlers. Some Diamond Firetails tried for a drink 3 or 4 times in a dust storm. The footage was grainy and out of focus, too much smoke haze polluting the air from wild fires nearby.

Each time the birds tipped forward, they lost balance.When 60 kph gusts pick up topsoil from land without any grass to bind it, the sky is dark and it becomes difficult to see. The finches allowed themselves to be carried away in the wind. They’re too small to stop it happening, but bob back up and try, try again for a drink. 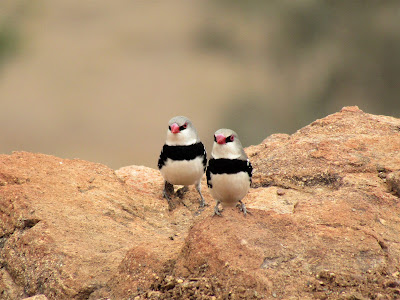 It would be funny if it wasn’t so desperate. 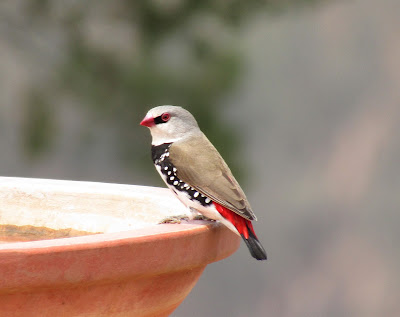 When the birdbath is dry the birds call for me to fill it again.

I hear them and head out to top it up, cheeping softly from the vines as if they are whispering.

If you listen closely you can hear the high pitched call. 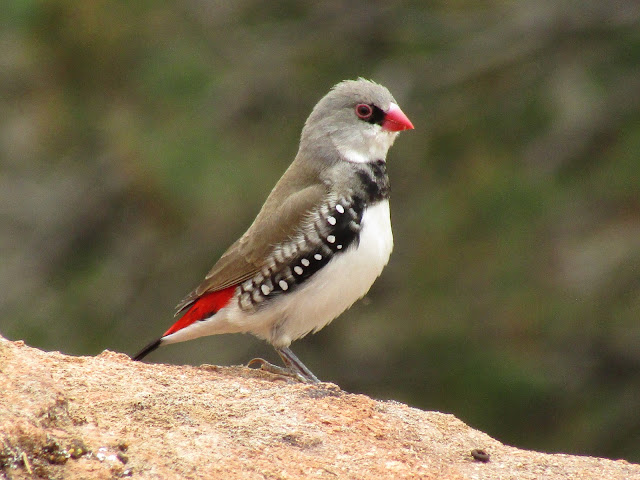 I put bread crumbs and a little budgie seed out for them, but they seem to have all they need to thrive despite the foul weather. 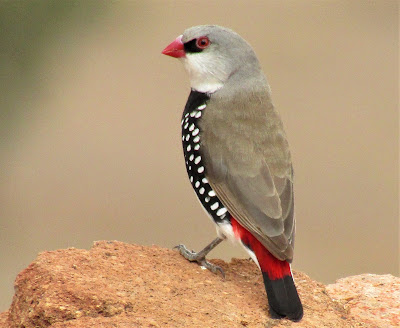 These birds pull together in tough times; it feels like an Australian thing to do.

Small communities, towns-people, farmers and strangers pull together too. 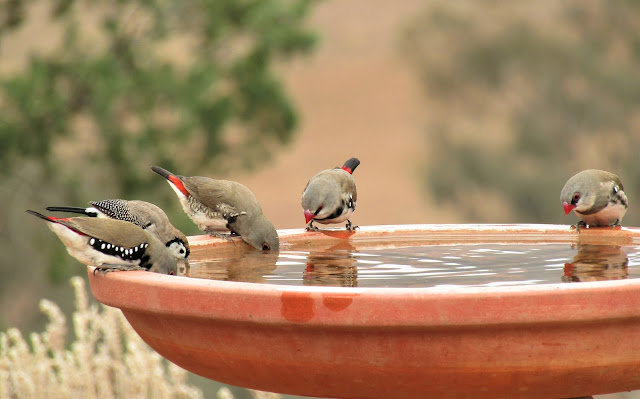 But this climate emergency that never ends is making me morose. 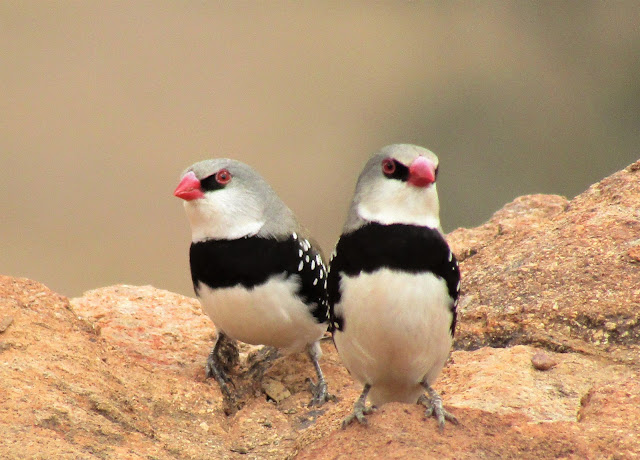 When I’m down about it I look out my windows. 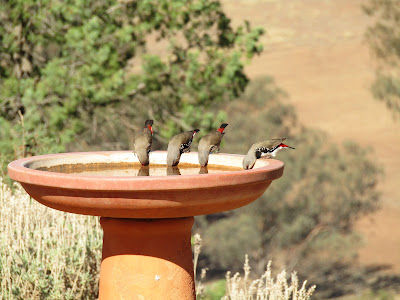 In minutes there’ll be small feathered things in a line, all bottoms up at the birdbath. 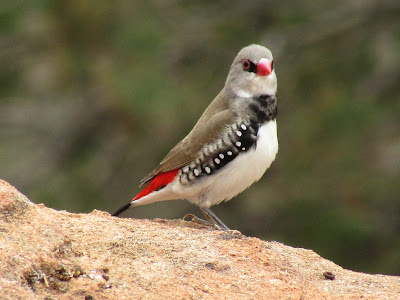 Seeing even one pretty juvenile stretching up high can take my mind off the weather. It stops me stressing about the state of our farm; a place that used to be beautiful too.

The finches make me less depressed.

Sometimes in birdlifesaving I’m the thing that needs to be rescued. 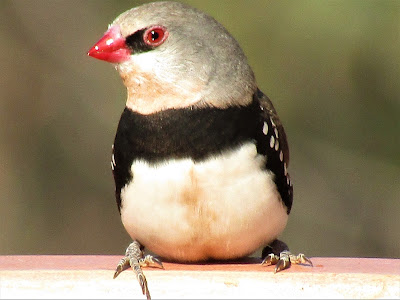 Posted by Therese Ralston at 00:39