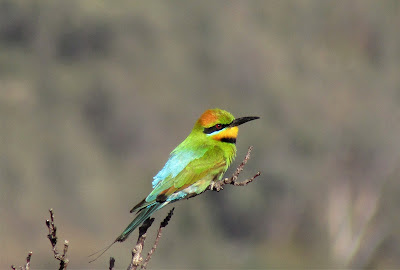 Looking out at sunset, the last rays of the day hit gold. The bird’s head was lit, shining like precious metal. This is the one I’d been watching and waiting for. My favourite bird-the Rainbow Bee-eater. 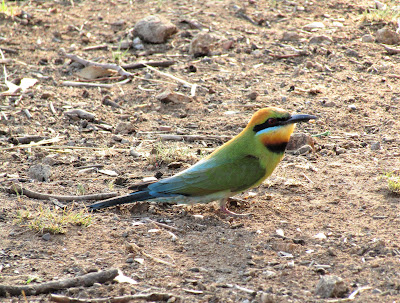 Two years ago, when I was flirting with bird-watching, there was a wow moment. Watering pot plants I looked up to see a bright coloured bird swoop through the air snatching a bee on the wing. 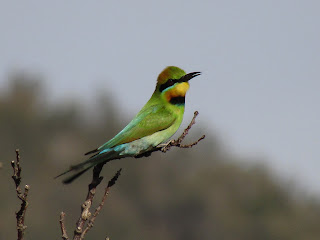 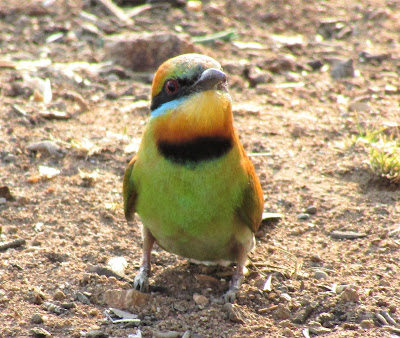 As it flew I glimpsed the bronze orange under-wings catching the sunlight.

There was a striped head, a black and gold chin strap, green breast and blue belly up against the blue-blue sky.


Tail streamers trailed behind the bird. 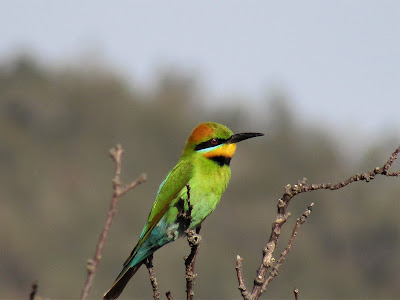 It didn’t see me as it soared past to a eucalypt. It was November and the start of breeding season, the Rainbow-bird had its mind on important things. 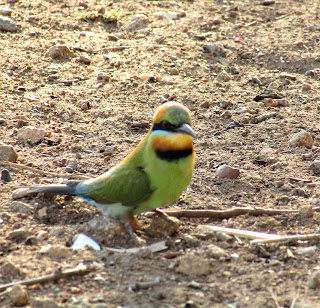 Witnessing a courtship ritual is startling in and of itself.

Tender and brutal, I couldn’t pull my eyes away.

The Australian Bee-eater sidled up to a female with a shorter extended tail. 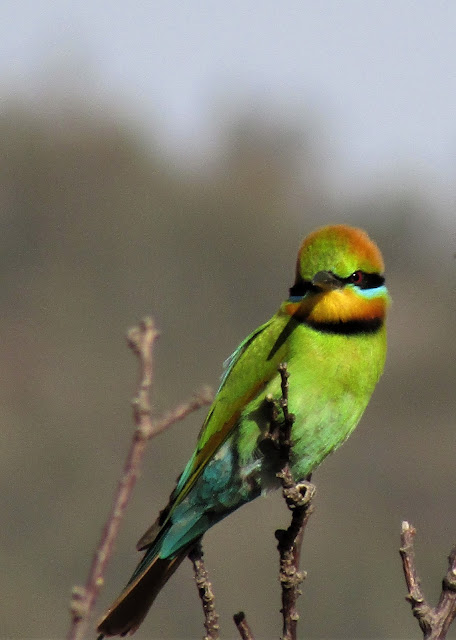 Watching this display was one of the reasons I wanted to be a birder.
The Bee-eater fluffed up its head to look larger, feathers high as if it had a buzz cut. 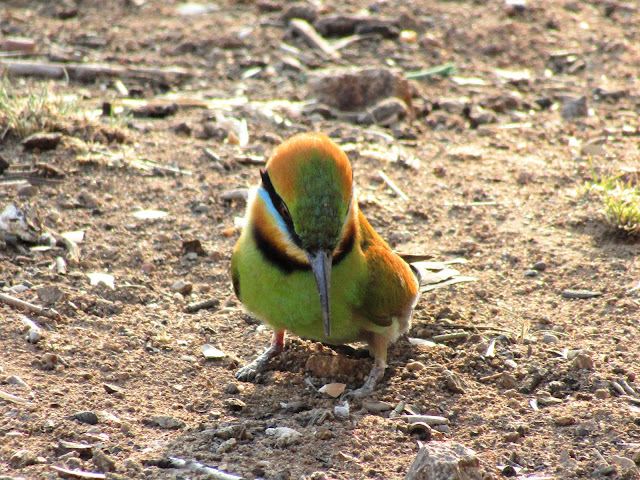 Rigid, he hopped along the branch awkwardly with both feet together.
It bowed deeply, its beak down, swaying as if it was drunk. 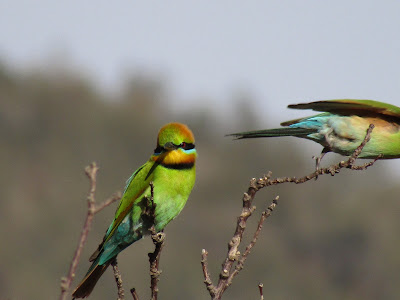 Spreading each orange wing in turn  it vibrated them like a fan. Forming its body into shapes, lifting and dropping its tail, it tried to impress.

The dirty dancing of the avian world. 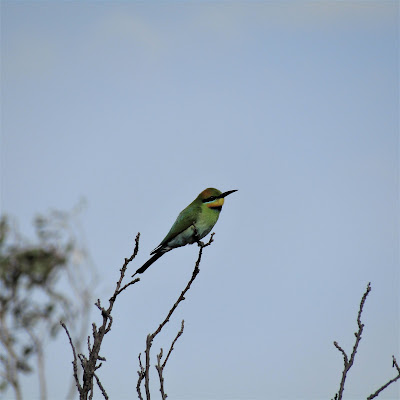 The female glanced at her suitor, then looked at the bee which still buzzed angrily.

The male stabbed the insect violently on the branch, scraping away the sting.

Sliding closer, his head was bowed so deeply it was almost horizontal as he gifted it to the female bird.

There was a long pause while she considered his proposal before snatching the morsel and swallowing instantly. 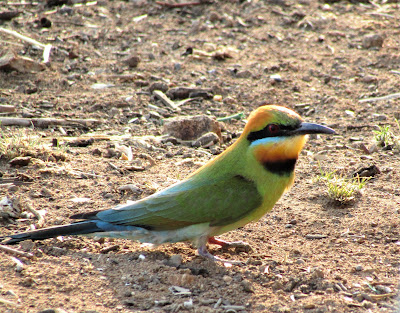 The Male Rainbow-bird sat upright and tilted his head, she tilted hers the opposite way; their beaks were side by side like humans about to kiss. 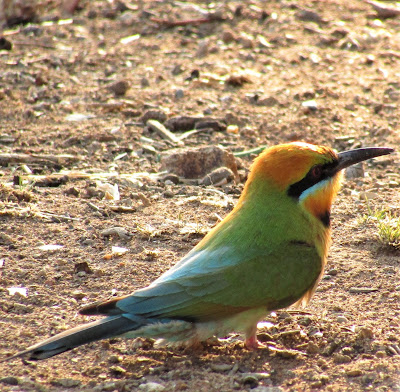 The new couple flew away then, exactly mirroring each other’s flight pattern in a close courtship dance that could be described as aerial ballet. 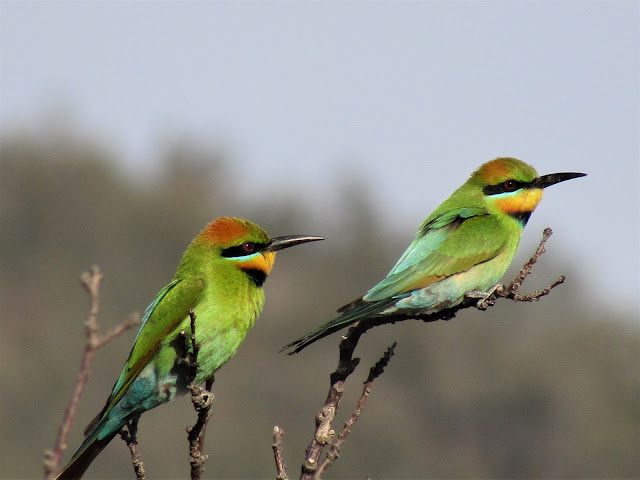 My jaw practically on the ground, I felt like I’d seen something not many others have the chance to see. 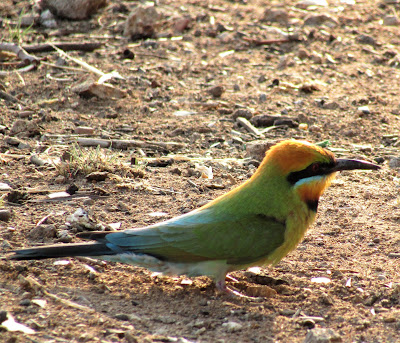 In taking his bee she acknowledged him as her mate. 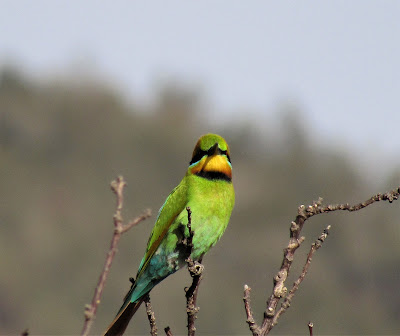 With that gesture was the promise that he’d sustain her while she stayed in the 1-metre tunnel they’d build together. 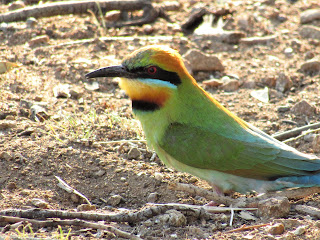 The bee gift was an implicit agreement that he would nurture and provide food for her and their chicks.
A symbolic act to show he’d be a good provider. 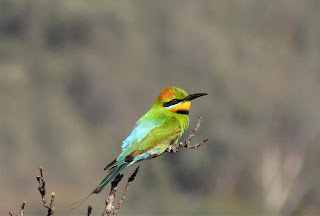 I saw Rainbow-bird marriage vows, though I didn’t know it at the time. I’ve researched birds since then.


The more I read, the more fascinating it has become. 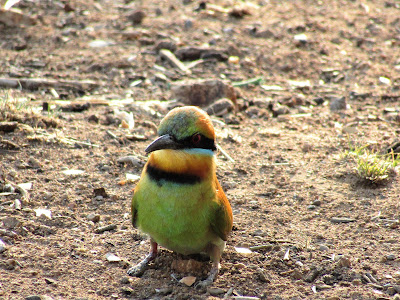 Two years I’ve been looking out for Rainbow Bee-eaters. No luck there.

A local bee-keeper didn’t place bee boxes on our farm in 2017 or 2018 because of the ongoing drought. 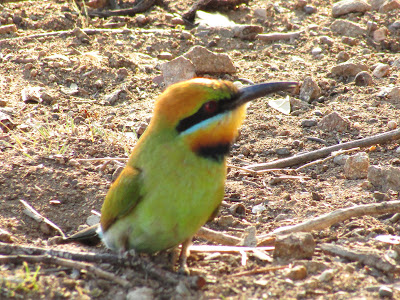 He placed them on our farm this year but the flowering season was far too short.

Because it was so dry, the yellow and white box gum trees only blossomed for 3 weeks.

Due to extreme weather, we had a 150-metre deep bore dug to provide stock water to our cattle. 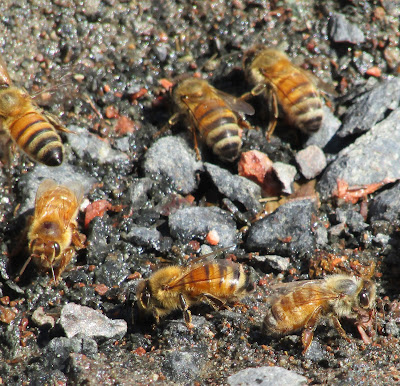 Riding around the farm in the Can-am to check the pump was flowing, I found bees buzzing in slow circles lapping at the shallow water there.


With no flowers, the bee boxes were removed at the end of October. 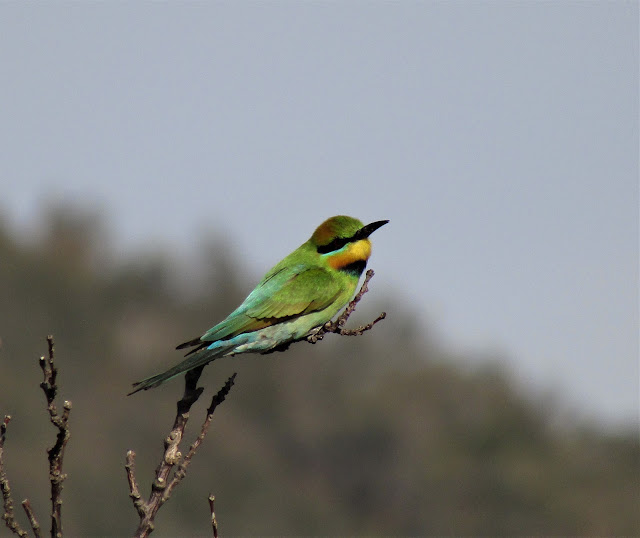 Waiting so long to see Bee-eaters I almost gave up on them.
I’d forgotten how amazing nature is.


I’d forgotten that Mother Nature often finds a way when it looks as if there’s no way.
Before our honey-man took away the boxes, some escaped and made new hives. 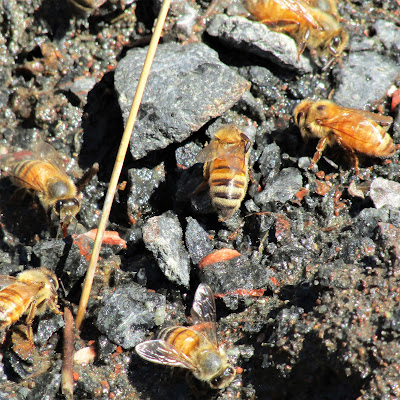 One beehive is the old-fashioned kind in an old eucalypt tree hollow on the driveway. 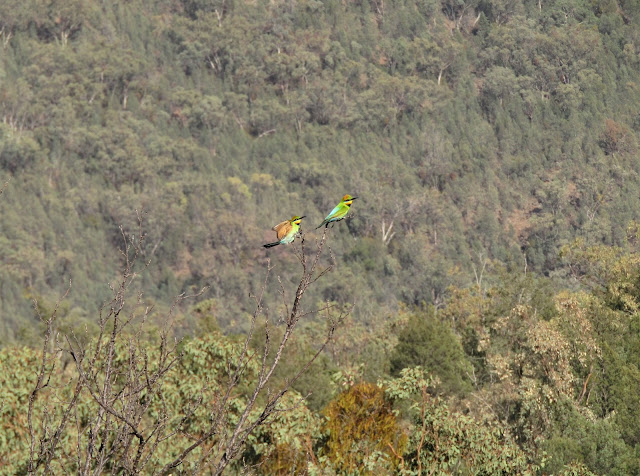 Two weeks ago at sunset, I thought it was Swallows ducking, diving and gliding. Then I saw flashes of gold in the sky.

Ten Rainbow Bee-eaters made figure 8 patterns like race cars on a track.

I saw tail streamers, bright feathers and their sky-play as they searched for soft dirt to tunnel into for an egg chamber.
These rainbow bright birds make communes of 40 or more in late spring.

Juveniles and males without a mate help excavate the tunnel nests, digging with curved bills that act as picks they scrape out sandy soil with partly fused feet that act as shovels. 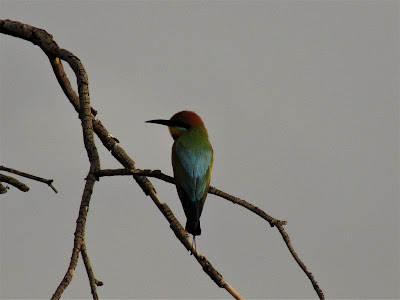 So excited the birds were back, I could barely focus the camera.
I see bee-eaters every other day now.  They sit motionless on bare branches or  scrounge the ground for insects, but always look uncomfortable anywhere but up in the blue. Rainbow Bee-eaters are at home in the air, where they fly fast and can capture wasps and bees with ease. The Rainbows fly gracefully. 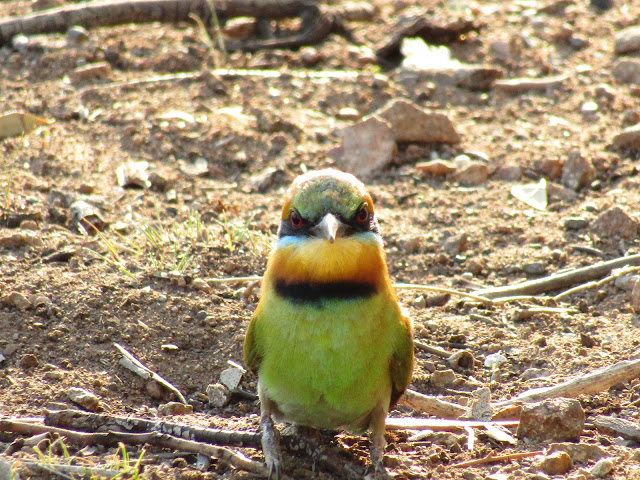 A Rainbow-bird after discovering I’m there. She isn’t impressed but I am pleased to see her. This is a birding-daydream come true. Besides, you have to love an angry bird. 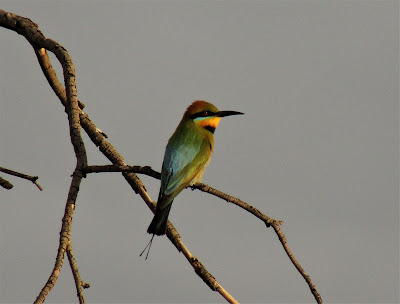 The afternoon sun never fails to capture the colours of the bee-eaters.
It makes their golden rainbows glow.
Shine on little birds.

Shine on.
Posted by Therese Ralston at 22:47