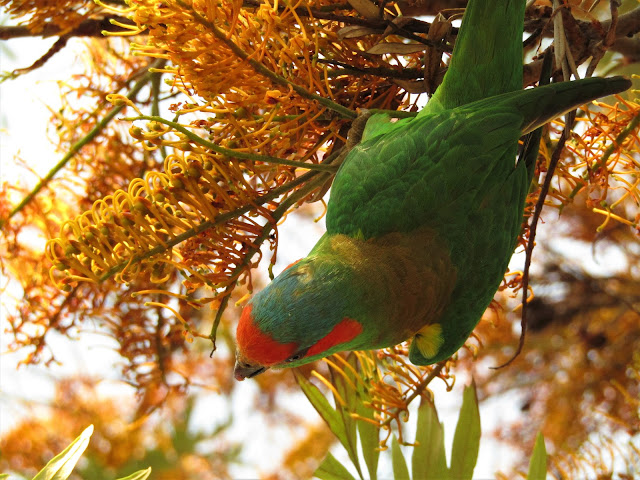 I needed to buy milk and bread on my way home from work. Because of scorching weather, I parked under a Silky Oak opposite the supermarket. As I stepped out of the car, pieces of orange toothbrush flowers fell in my hair. Something was up.

I searched the canopy, but could only see moving leaves and flowers. 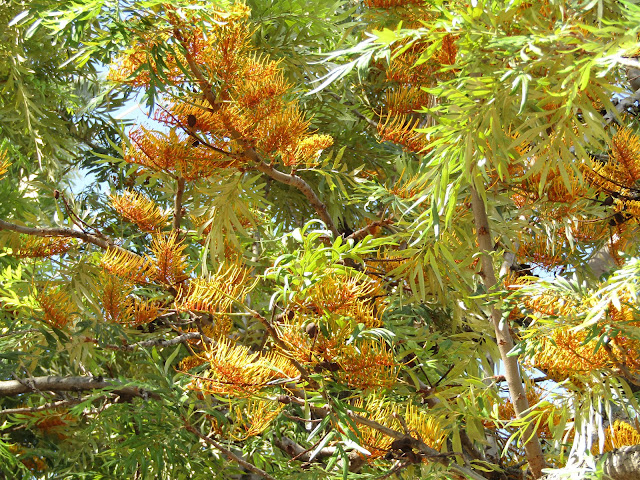 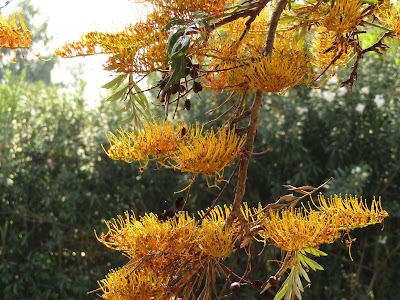 Blinded by the sun going down in the west, I grabbed my sunglasses.

I could barely see shadows. Waiting until my eyes adjusted-still nothing. Just vaguely moving blobs of green and gold, plus searing light. 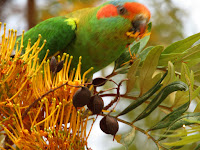 That’s when I heard the flock.
They must have been tweeting that I was lurking about. This leaf green bird blends so well even the camera finds it difficult to focus.
This Lori is called a few different things.

The common name is Musk Lorikeet. Some people believe the birds give off a musky odour.  Even so, beneath this bird the only thing I could  smell was a scent that reminded me of honeysuckle. 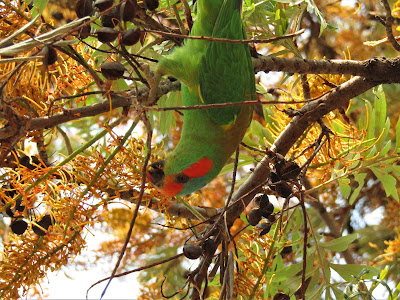 They are also known as a Green Keet, which I like. Green Leek is their other name, which makes them sound like a vegetable.

Musk Lorikeets make a metallic-sounding screech when flying together, but chirrup and chatter softly in a group.

Females have a turquoise crown, while in males it’s a stronger blue. They also have splashes of yellow, blue, red and lime green feathers. 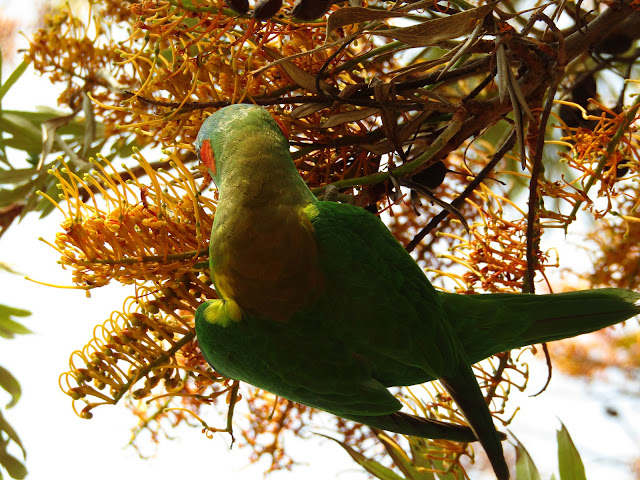 When they’re not moving Green Keets are almost impossible to see. 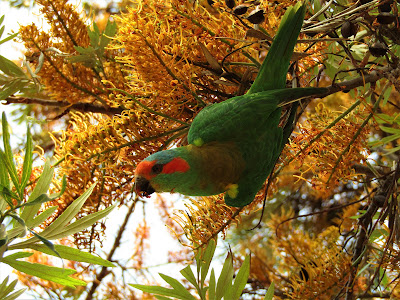 Nomadic, they go where eucalypt blossom, native flowers and nectar is. They love woodlands and being high in the treetops.
I only photographed one bird of 20 or more in the oak. The other Loris camouflaged too well with the rest of the tree leaves.

Down low, this bird stood out against a huge amount of golden bottle-brush flowers. 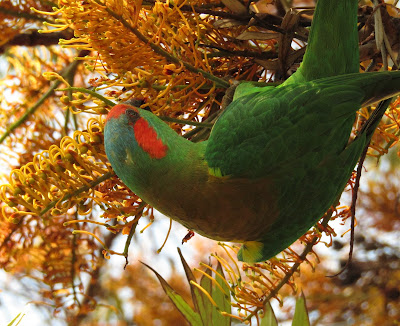 The one green Lori showed off its acrobatic skills, spending most of the photo-shoot upside-down.

It was 36 degrees or about 90 F. These leaf coloured Keets have green eyes and even olive green feet.

Around 22 cm long, they blend in. I took photos without seeing where it was. 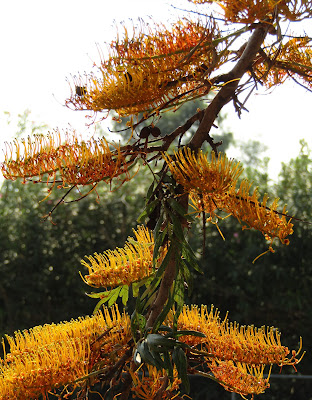 Perspiration poured down my face as I searched the canopy for other Green Leeks lapping nectar.

As more golden flower bits rained down on my head, I wondered if they were dropping stuff intentionally. 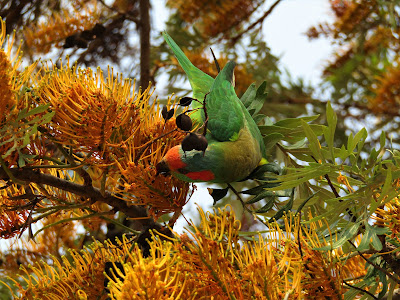 Still, how many chances does a girl get to be under a blossoming tree where wild Lorikeets chatter through afternoon tea?


I fetched my long-distance driving glasses to see if I could spot another Keet.


No, I felt dizzy as shards of sunlight pierced my eyes so much I saw after-images. 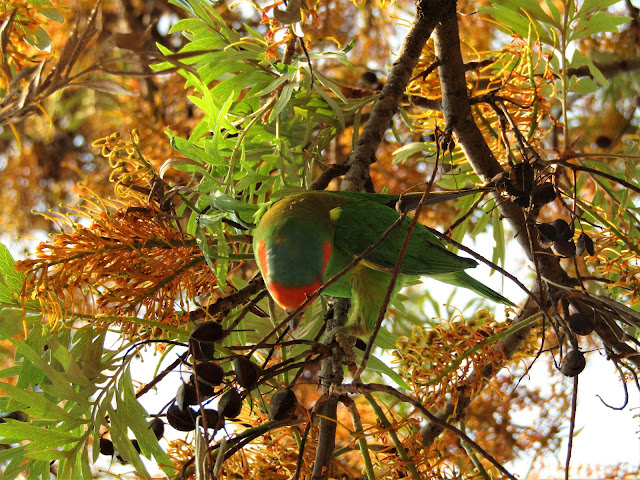 If I can only feature one bird, it should be a good one; this Green Leek was very obliging. It might have been a treat to see more of it the right way up, but it didn’t seem to mind me or the traffic zooming past. The acrobat was too focussed on feasting to care. It doesn’t get better than that when taking photos. 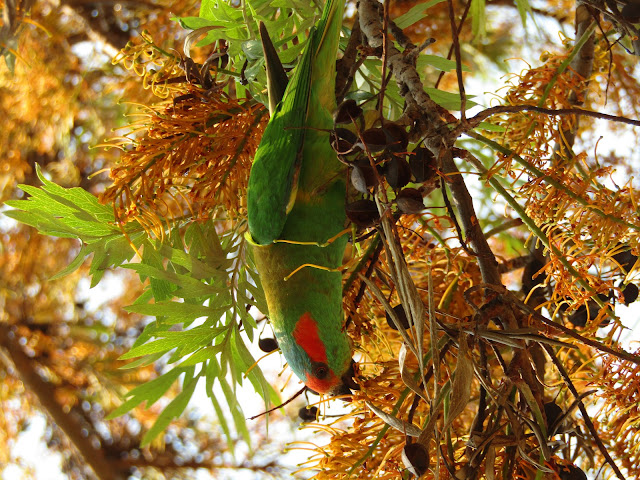 Musk Lorikeets eat pollen as sticky as honey. After a pig out on nectar, the birds pair up and lick each other’s faces clean. It stops the sticky stuff gluing their face feathers together and works to bond the flock as well.

When bright shards of sunlight became too much I went to buy the groceries a happy birder. I knew something was wrong when people glanced at the top of my head.

I shook my hair free of yellow-orange flowers before driving home. 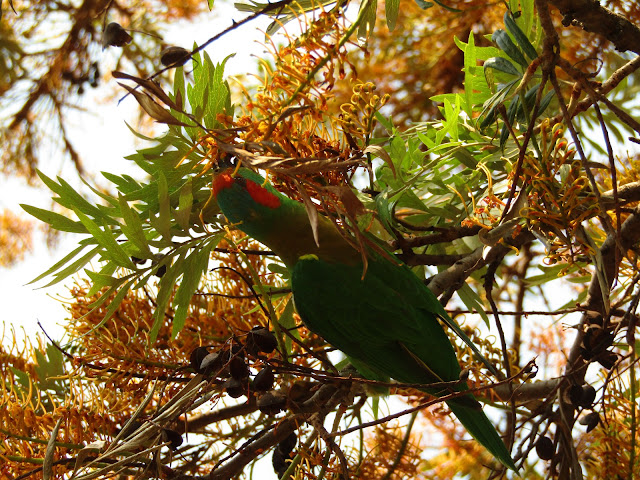 My husband asked where I got the gold halo from. Flowers, twigs, leaves and sticky stamens were stuck all over. I wore that Silky Oak, but it was worth it.

How many other people are entertained by a Green Keet in the afternoon? 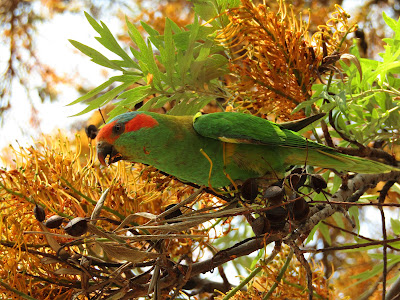 Musk Lorikeets can chirrup, chatter, lick, lap, eat and stretch all at the same time.
Now that’s multitasking.
Posted by Therese Ralston at 15:16