52. One in a Million Chillawong 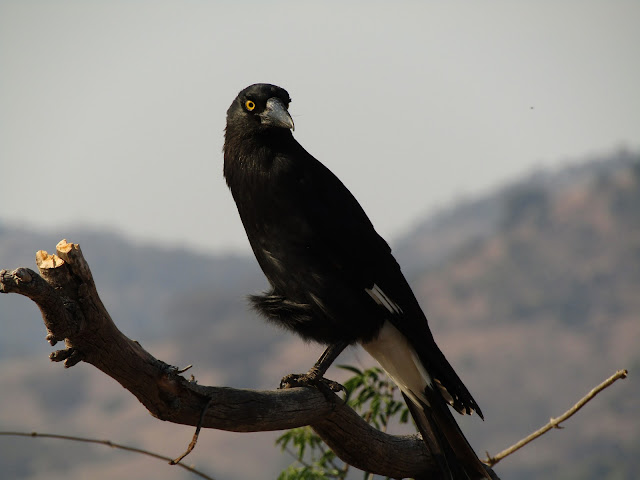 There are a million Pied Currawongs in the forests of south-eastern Australia. I’ve just seen a baby one in a million bird.


Currawongs like forests. Our farm has Eucalypt woodlands and Cypress Pine forests on the mountains that surround the house. The bird I spied stealing food is only fresh out of the nest. 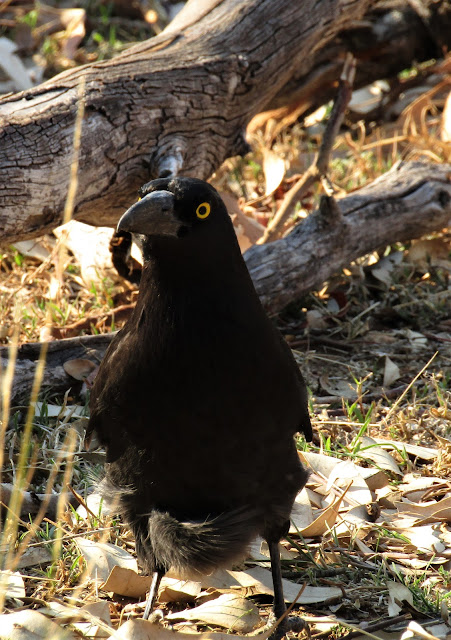 How can I tell?

Yes...it has a very cute tutu.


The bird still wears the downy feathers that formed when it was a nestling. They look like a feather skirt just above the legs. This guy also has a strange croak, a wail different from more developed adult calls. 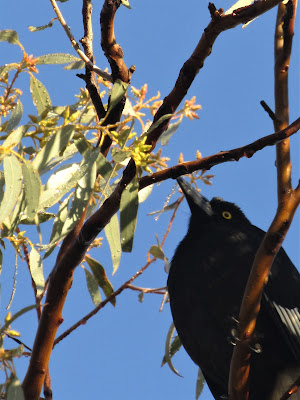 The Pied Currawong has heaps of other names.


My favourite is the Chillawong- such a cool moniker. 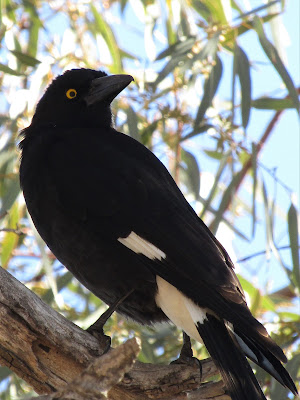 All the Currawongs I have at home hate having their photo taken.

The juvenile hates it as much as its parents.


Staring at me with one glowing yellow eye, the little Curra makes it clear it doesn’t like me watching. 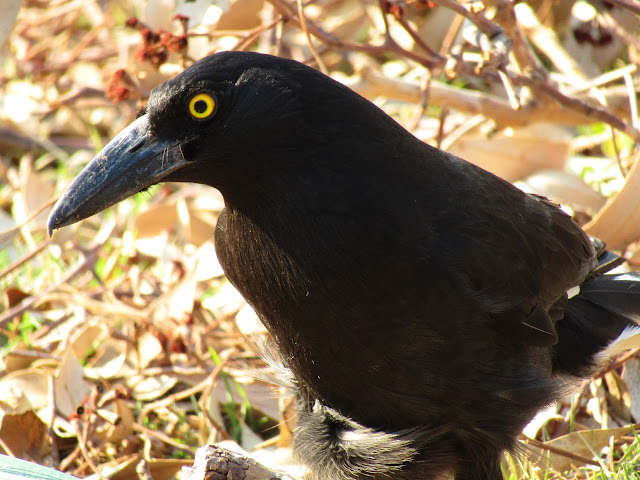 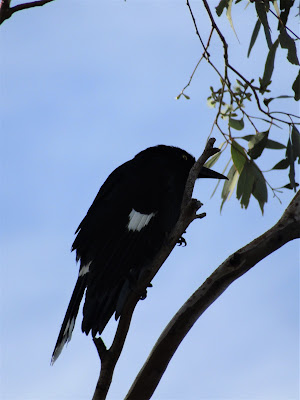 The Pied Currawongs look funny making two-legged jumps. They stride along the ground on long black legs, putting one claw out and down in front of the other. 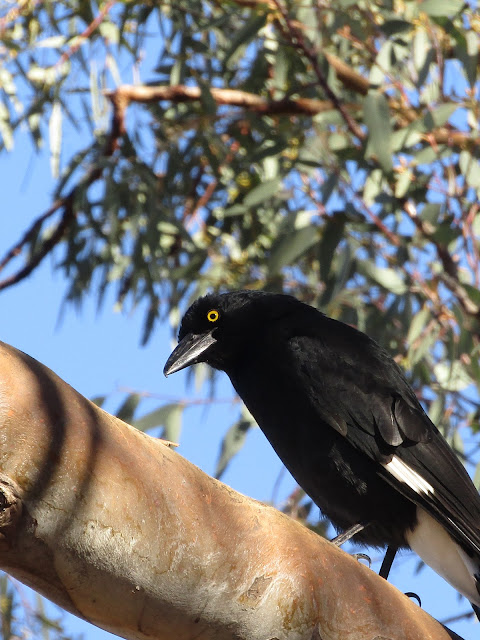 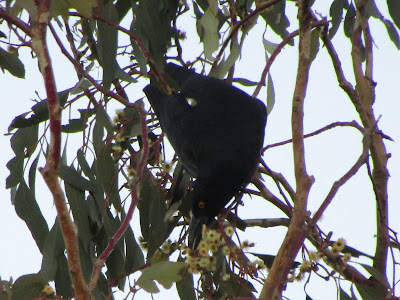 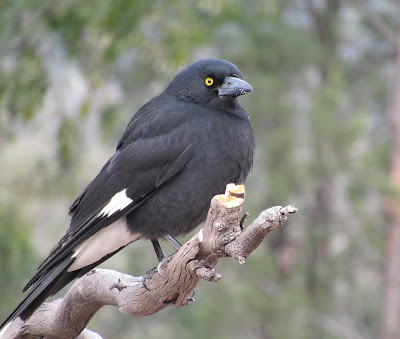 Most juvenile birds are more of a dull grey brown than their parents with jet black plumage.


Here are 2 pictures of one of last seasons juvenile Currawongs. 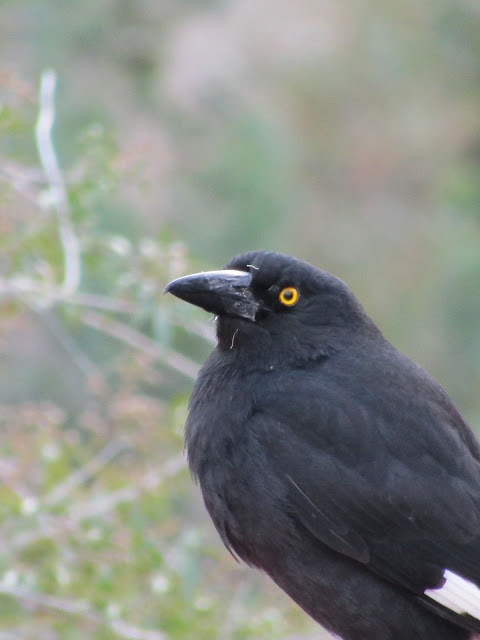 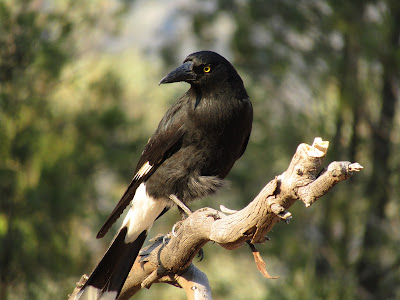 Only been alive for 2 months or so, this juvenile bird already seems well practised at putting on a real big-guy cranky face.


Not as crafty as its parents yet, this black and white baby gets harangued by my long term resident Willy Wagtail nesting nearby.

That quick video was taken over a week ago.

The Wagtail has attacked it each morning since then.

I see it every day; it makes me laugh.


The baby Curra has no idea of it’s own size or strength yet, but it will. 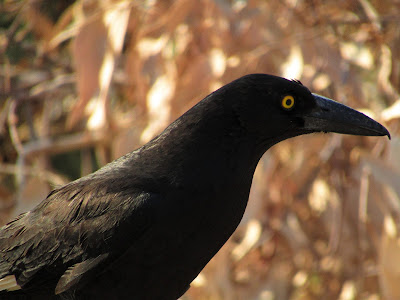 If the fellow with the grey tutu goes to the birdbath it almost expects to be dive-bombed now. 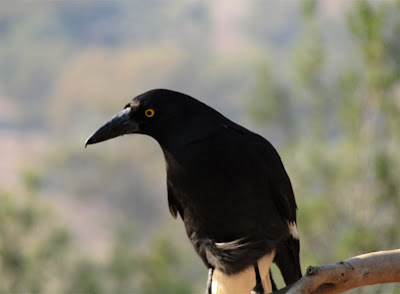 It is also attacked by White-plumed and Spiny-cheeked Honeyeaters for flying anywhere near where they have their own fledglings or any one of the nesting trees. 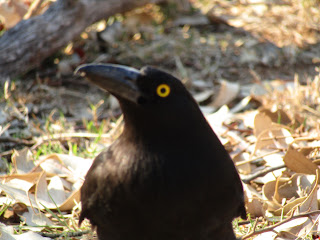 It’s funny to see it duck and weave to avoid a whole lot of much smaller birds.

With a thick, heavy bill, one day it might even eat them although it prefers carrion.


Still so young, it just doesn’t understand why.

I photographed him stealing the food left out for my half-pet/half-wild peacocks. He’s welcome to what they leave behind, just like all the other birds who make the most of every seed and scrap I offer. 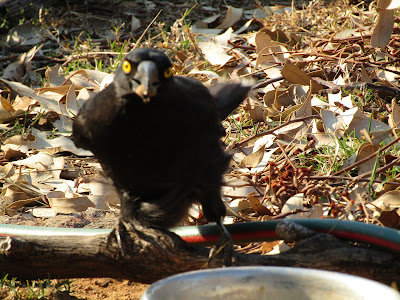 My favourite photo has the bird with a small dog biscuit in its beak.

A blurry pic, the small Curra is raging at me with both glassy eyes and wishing I’d go away.

I leave it alone, but I’ll be looking out for the bird with the fluffy bottom from now on. 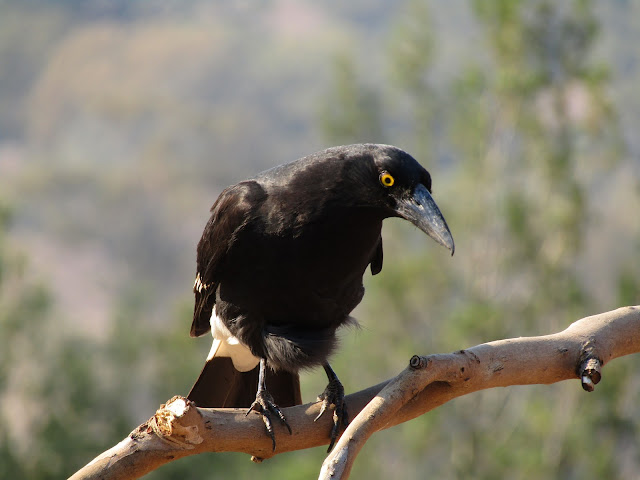 The juvenile Pied Currawong might only be one in a million,
but it has character and I like that in a bird.
Posted by Therese Ralston at 13:01