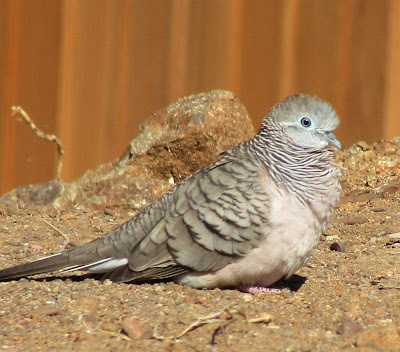 A small Peaceful Dove flies by. Its neck is striped like a zebra; its belly creamy white, breast slightly pink. Wings are scalloped with black edges as delicate as wedding cake decorations.
Like the perfect paint colour, the beak and cere are blue. The doves eyes are surrounded by a soft grey-blue shadow. The bird bobs its head backward and forward as it strolls along. 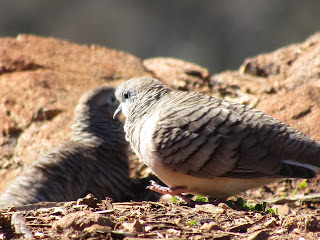 After a few minutes trotting like an Egyptian, it starts a characteristic coodle-you-cooey sound. 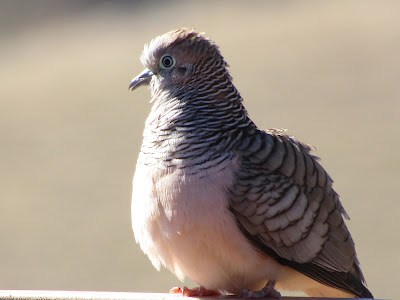 It is the noise I’ve been hearing before 6 am for weeks now.

In spring, these tiny doves go a bit gaga with the cooing, trying to attract another blue-eyed boy or girl. 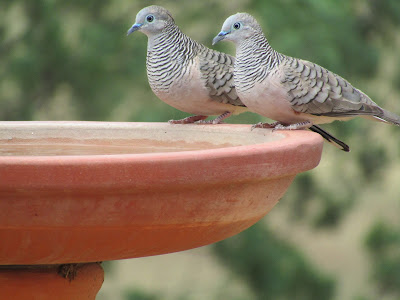 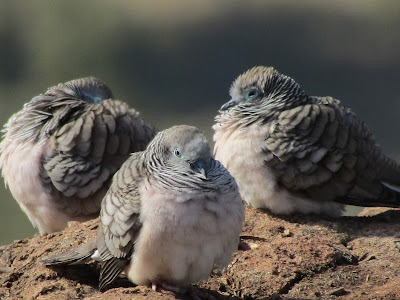 A worn-out copy of Simpson and Day ‘Field Guide to the Birds of Australia’ says this dove is of the race Tranquila. 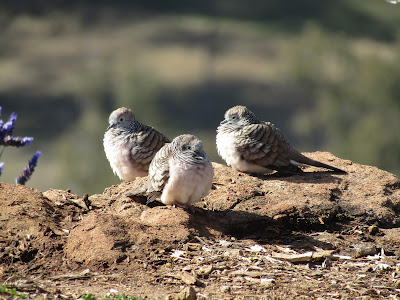 Other names for these birds are Turtle-Dove or Zebra Dove, in Latin it is called Geopelia Placida.

They are mostly placid and make themselves into feather fluff balls when cold. Most of the time they do look fairly chilled out. 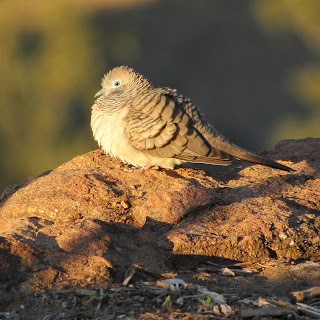 Peaceful Doves also nod off to sleep quite a lot during the day. They seem relaxed when me and my camera are not out there with them. They suit their name. While exquisite looking,  these birds give me no peace and no tranquillity on spring mornings.


Last Sunday, I filmed 7 Peaceful Doves stealing the food I leave out for my free-ranging pet peacocks. The doves are lovely, but always nervous of me. 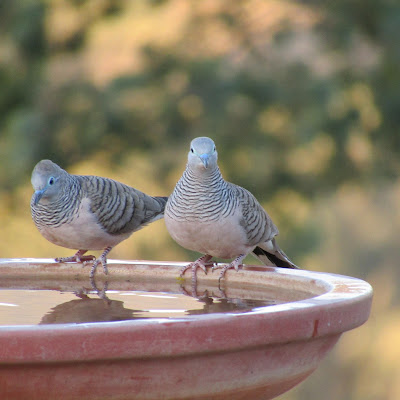 This time of year, distracted by the opposite sex, they often crash into my windows.

Next to habitat destruction, colliding with windows is the biggest killer of all birds.


I tried all sorts of things to stop it, but it keeps on happening anyway. 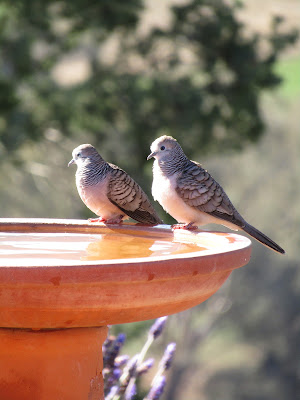 Far more die from hurtling into glass than are taken by birds of prey.

As I was downloading the film of  7 doves gobbling birdseed in the backyard, I heard a crash.

I took an old flannelette shirt outside to hold the bird. Letting it go, it waddled around on the computer room floor and made a small flight. 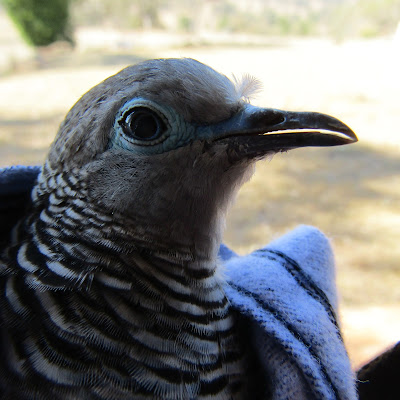 I dribbled water from my finger, but couldn’t get the bird to swallow. I wet its breast and head a bit because that’s often the best way to revive birds. 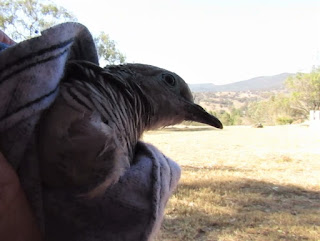 Like other grass-seed eaters, Peaceful Doves only drink by immersing their bills and sucking up water. I had to turn the dove upside down to dribble water in its throat.

The dove squirmed, not enjoying being the wrong way up. Not holding too tight, it flew onto a plastic bag of documents. 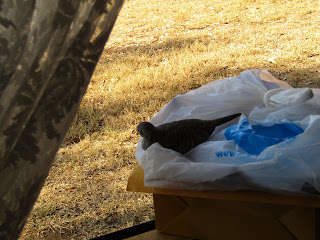 I rested it on the windowsill, holding it steady for a minute, but the bird needed more recovery time. It didn’t have the right posture. Resting its chest down so low it wasn’t capable of flying. 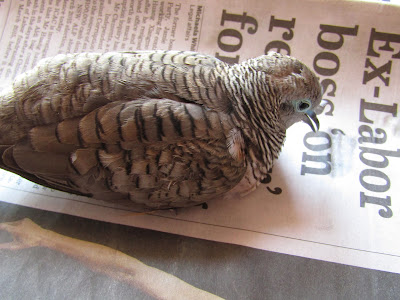 I left the window open, gently placing the dove on an old newspaper on the floor.

Here’s the film of me going out, leaving the bird to rest for 30 minutes. 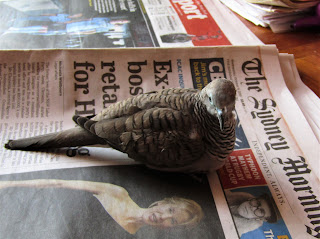 I tried to be quiet but the dove became frightened once I opened the door. 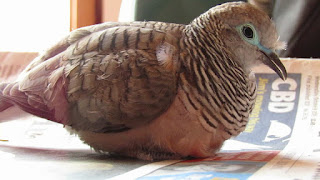 And here’s the film of me coming back into the room.
Up, up and away, it flew straight out the window. 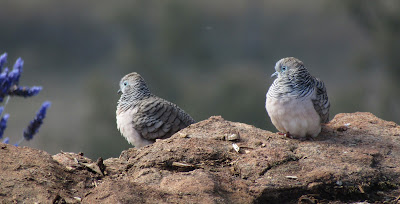 The photos I took of it don’t look right; I doubt that this dove survived. 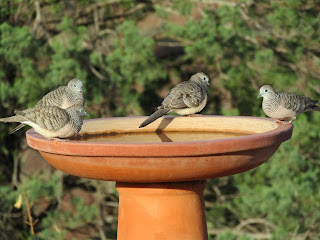 I went to search for the blue-grey bird.

It wasn’t on the ground or on a tree branch anywhere near the house.


I’m hoping it flew to safety, but I can’t save them all. 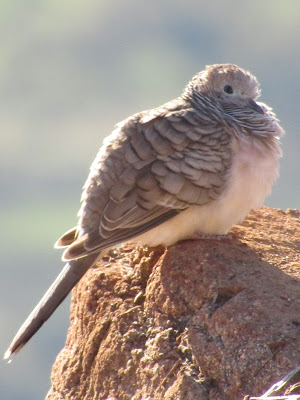 Doves always hit hard, really thumping a sheet of safety glass from a window or door can give it horrendous internal injuries.
Most birds bounce off the glass, shake themselves, walk in a circle and fly away within 30 seconds.

The good ones recover so quickly  there is no time to take their photo as I watch from inside.

Some bird hearts give out in shock. 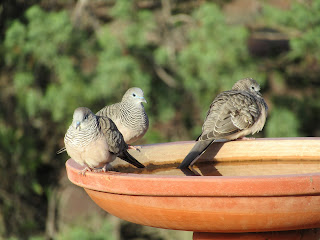 This morning I heard the house flock of about 30 Peaceful Doves cooing.

They are scrounging for remnants of yesterday’s seed not eaten by the peacocks. 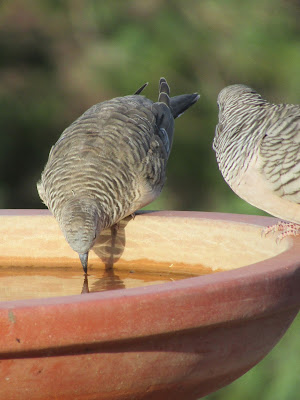 They are as annoying as any cuckoo.

I can’t go back to sleep once they start playing that sound over and over on repeat 135 consecutive times.

But today it is alright. 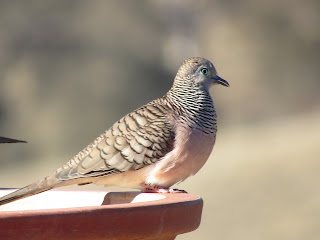 I got to see one Peaceful Dove up close and personal last weekend. 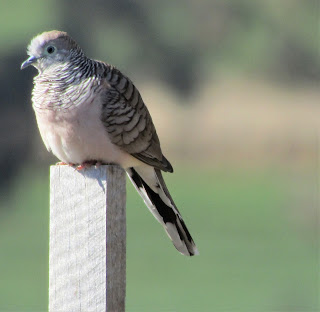 I held the warm body of a dove in one hand.

I tried to get it to swallow some water and keep its eyes open. 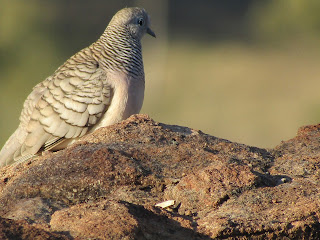 There are many windows and glass doors in my home. All but the one I take pictures from are kept very dirty, always. That is intentional, but the birds still crash.

I did my best to revive an injured Peaceful Dove. 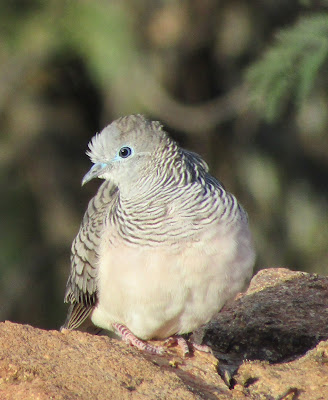 Sometimes that’s the best I can do. 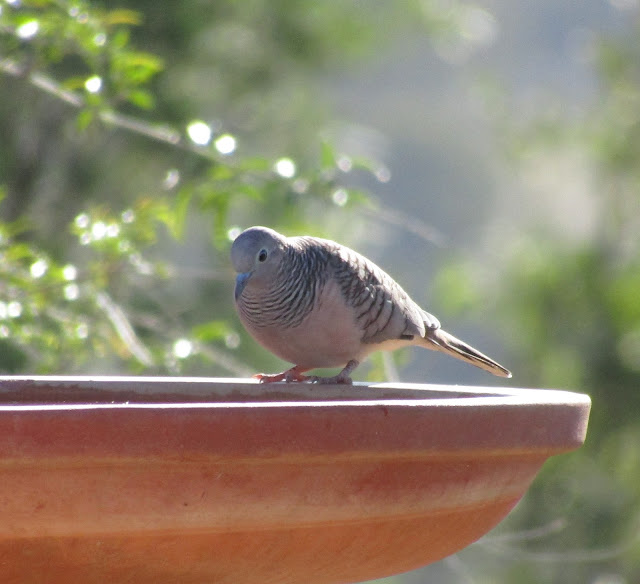 Posted by Therese Ralston at 23:34