Waking before six this morning, I looked out the window to see the valleys where we live shrouded in fog, in thin cloud, in ghostly mist. 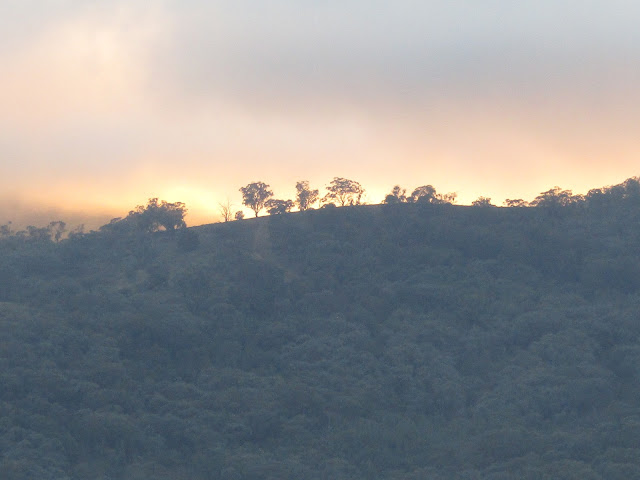 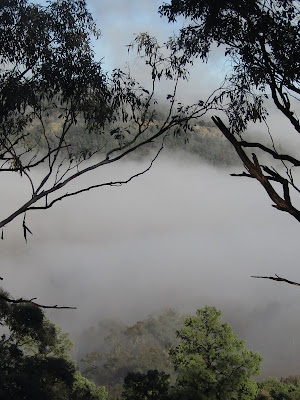 Outside, the sun was slow to rise. Eight-thirty and the orange glow still hadn’t crept over the hills.

Clouds drizzled all day yesterday; it made a wonderful  change. A respite from the experience of the worst drought in living memory. When I was young I always complained about rainy days. Forty years later I long for a long wet week and the normality of a good season. 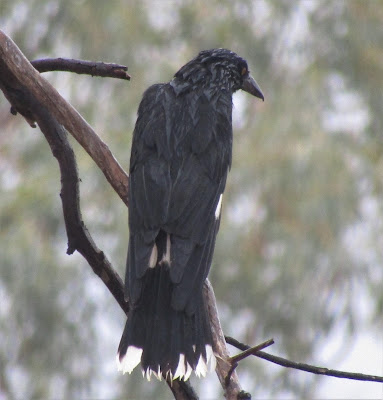 The Currawong that thieves food I give the pet peahen seems morose. Drenched with rain it peers at the ground. Standing statue still, it waits for some vague animal movement to dive, catch and kill.

All the birds seem bedraggled, as if they weren’t the same creatures. 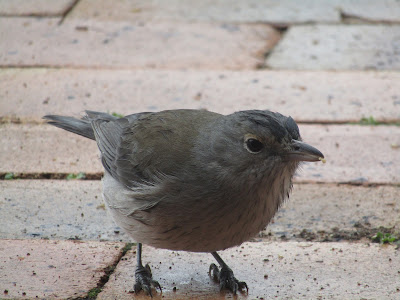 A sodden Grey Shrike Thrush peered through my lounge room window, wondering if I would come out and sprinkle some more budgie seed about. She has become used to me taking photos lately, but this little model expects her fee paid out in something edible. 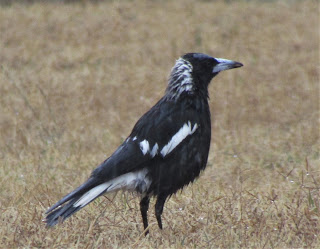 I saw Magpies feast on dozens of worms that came to the surface of our dead brown lawn. I had no idea that any creature below ground could survive so long without moisture, but nature can be surprising. 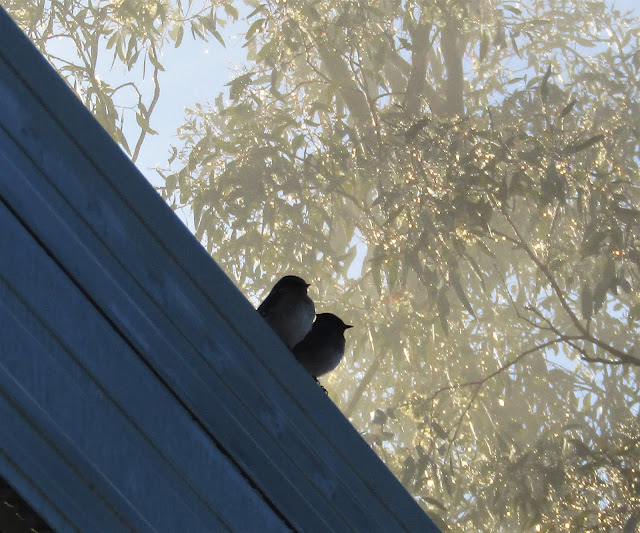 Welcome Swallows sat in pairs on the roof. They often take chicks out for their first flights when rain is easing. A window of time when predators stay in trees or can’t see well enough to take them. 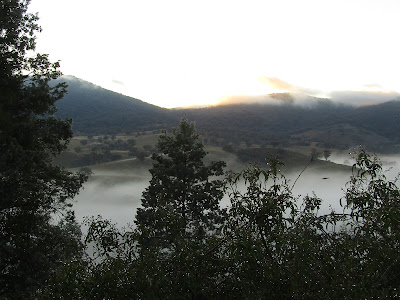 Warm, dry and cosy by the fireplace, I watched as all kinds of unidentifiable birds flew fast through the light showers.

Seeing their torpedo shapes glide through the fog is something special. 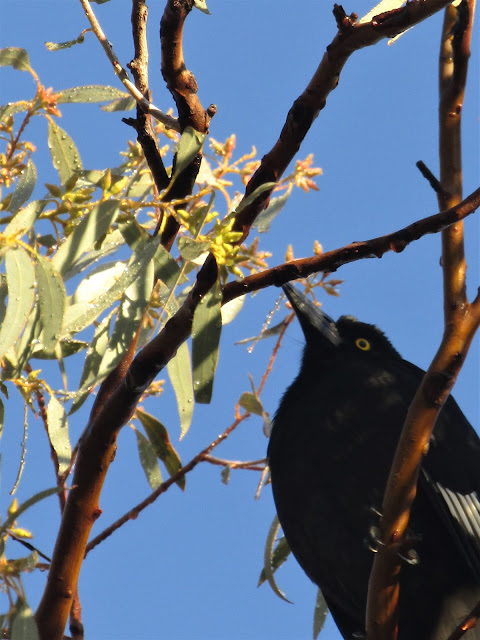 Most birds in flight were too indistinct to see in the pea soup of this morning. They move as if in a hurry to reach clear sky.

I can tell what some birds are by the sounds they make.

I also know Noisy Friarbirds that have been in residence for the last five months by their chuckling calls. 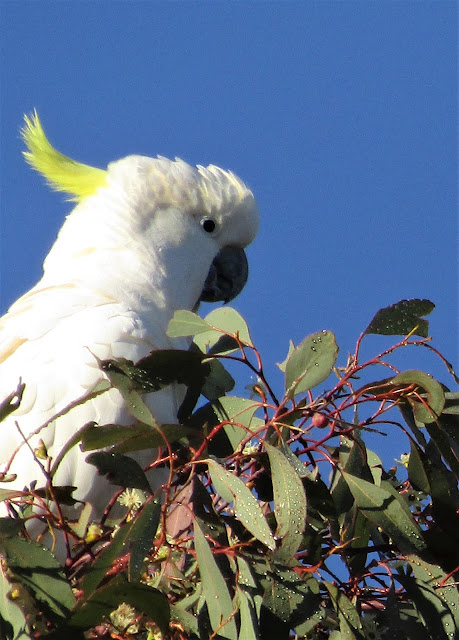 It’s only been a day, but the same Currawong as before looks  plump and regal now. I see it swallow drips from the branch in our backyard.

Once full daylight hits the trees, all the birds emerge to shake their plumage.

This Cockatoo was licking dew from a eucalyptus still blossoming in mid-winter. 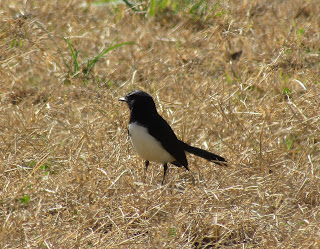 Before I came in for breakfast, I saw a Willie Wagtail kangaroo jumping  to scare up the insects it loves to eat.


Culling photos later on my laptop, I noticed a few green sprigs that weren’t there before. In 5 weeks it’s rained less than 2 cm; not one of the 20 inches we are supposed to get in our average annual rainfall. It’s really not drought breaking, but maybe it’s enough to revive the lawn again, especially if there’s follow up rain. 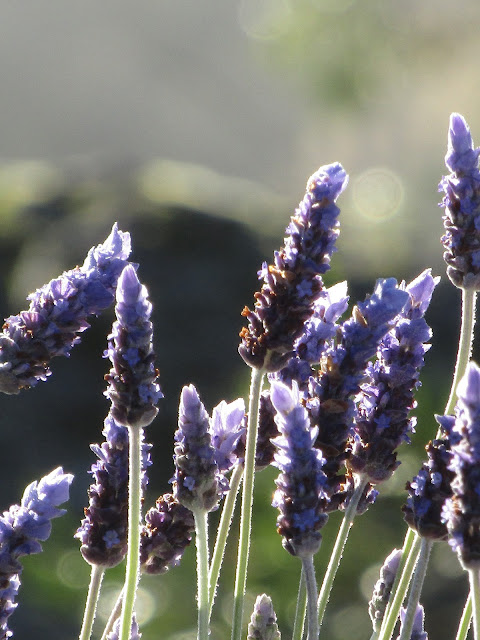 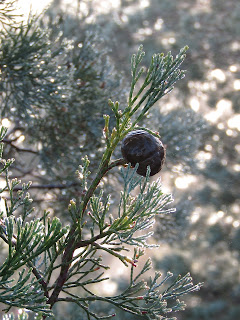 It takes everything climate change, global warming and plastic-addicted, habitat-destroying humans can throw at it.

One slim break in the horrendous dry spell we’re experiencing in NSW is rewarded with the signs of  fresh new growth in hours. Magic. 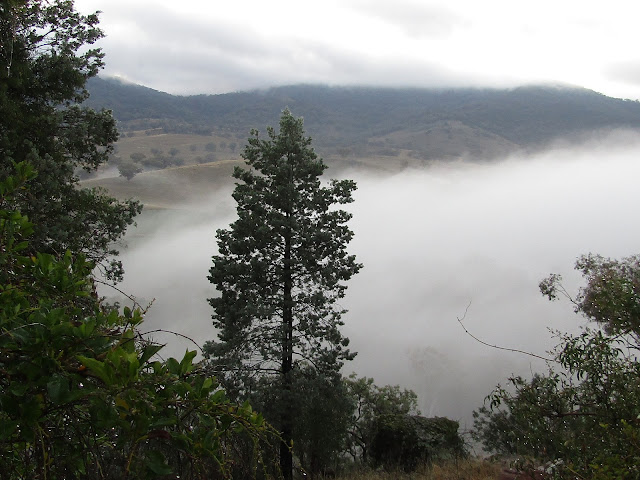 It’s amazing how everything shines after a rain shower. 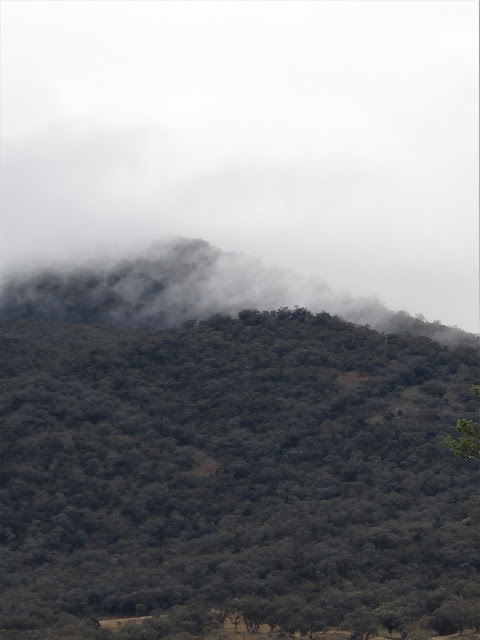 A farm in the mountains. A hill with a house my husband built.
Cliffs and gardens, native trees, birds and animals.

The 360-degree views from our house are worth seeing,
they change with the light of each dawn, day and dusk. 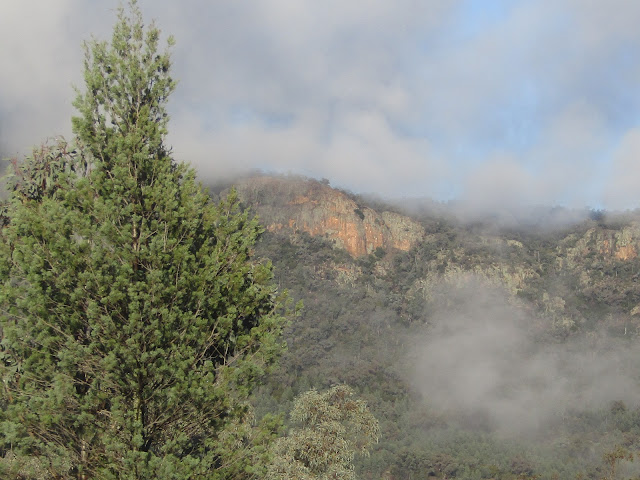 On misty winter mornings when clouds rise, drift and disappear
like ghosts that never were, my home is lovely. 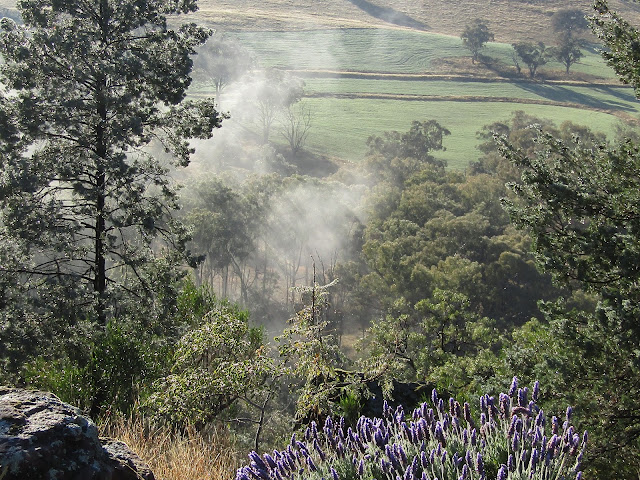 After frosts or fogs, a sunshiny day brings out the birds. 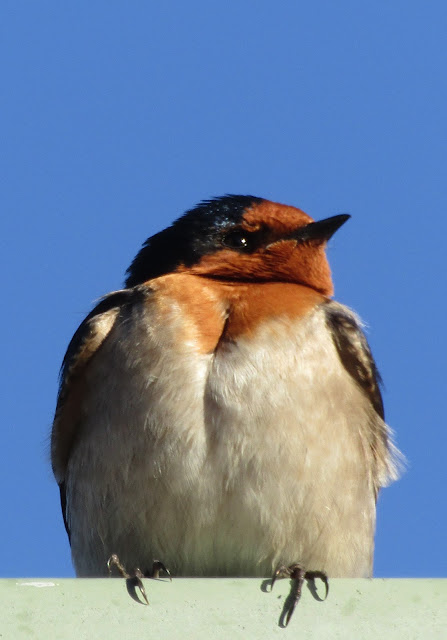 Refreshed, they flit, chirp and chase each other through the air
in fine and dry feathered form again. 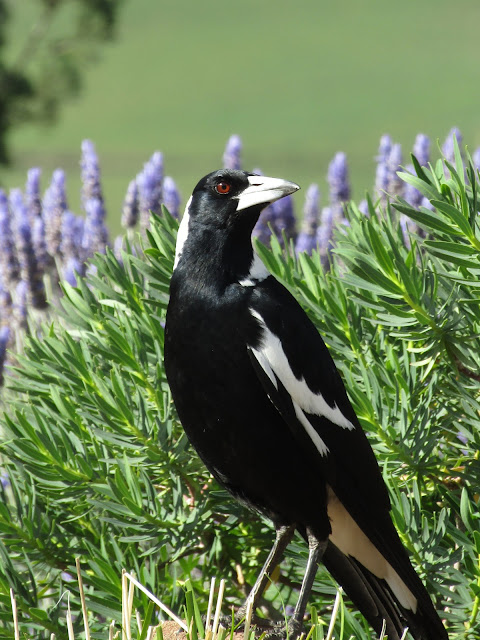 I really like it here; I’m fairly sure the birds do too.

Posted by Therese Ralston at 14:11