Driving home from work, I saw a Brown Falcon. It was almost 5 and the sun seemed impatient to set. 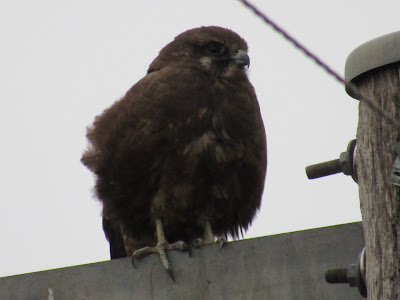 I slowed the car, pulling over at the side of the road. 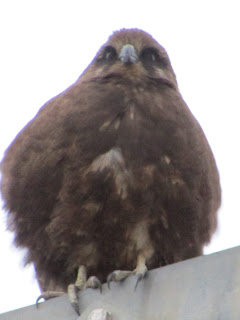 Stopped about 20 metres from the power pole where the bird sat; I watched through the windscreen. It watched me back, curious.

The wind blew hard. Only the start of winter; it was already snowing somewhere in Victoria. It felt like the icy breeze was blowing straight off that.

Feathers fluffed out, the bird seemed like a bear up there. Contour feathers were dancing, turning inside out like an umbrella in wild weather. 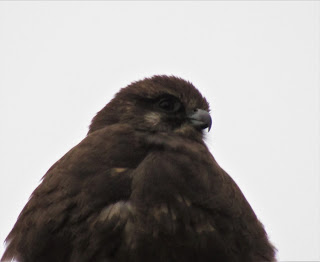 An adult dark morph, the Brown Falcon was cold.  I was too; the weather was bitter. All of autumn the temperature stayed as sunny as spring, between 20 and 28 degrees most days. This cold snap was a shock after the perfect warmth.

Bird books say these common predators are found on farmland or roadsides. The road I was travelling had farms either side. 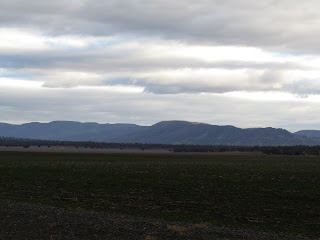 I often see raptors along this route. Nankeen Kestrels, Black Falcons, even Black-shouldered Kites. These birds take the high view from electricity pole crossbars, unimpeded by the foliage of trees.
Parked nearby, I try to get photos but birds mostly fly off. They don’t like being seen; not wanting to feel like the prey that they constantly prey upon. 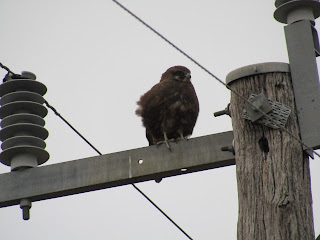 I’ve followed falcons from pole to the next pole for a km. Seat belt on, seat belt off. Start, stop, ambling as if I’m in a city traffic jam. The birds fly off as soon as I creep out of the car with the camera. 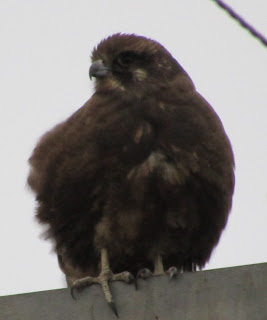 This evening I take my time. Sunlight seeping away while I wait, it will be too low light for decent photos. More than anything else I want to experience a falcon close by.
When raptors swoop on small prey with talons extended, it takes my breath away. Like something seen in a wildlife documentary.
I wait almost ten minutes before sliding out of the car, camera settings ready. 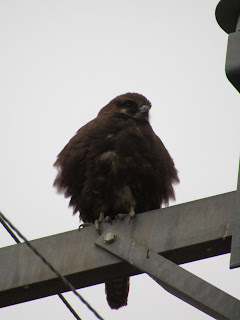 The Brown Falcon keeps watch but stays. No sudden movements, I’m a ninja. So dark it’s hard to focus on the bird, its ruffled feathers wave around it.
Almost used to me, the predator closes it eyelids for a time. Perhaps 30 seconds go by when it rocks gently on its viewing platform. 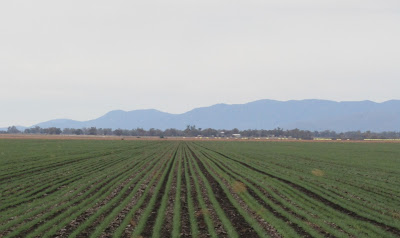 The falcon checks new crops in neat green rows. With better vision than humans, this predator can see to the foot of the mountains.

Turning its head continually it senses movement in the dry old plains grass up to six kilometres away.

I stay and it stays, watching until the sun is almost gone. Until surrounding windmills, homesteads and sheds fade to silhouettes.

This glorious Brown Falcon pulls up a claw, resting it against its belly. As it peers down, those earthy brown eyes feel imperious. The stare has beauty and power in it; as if I’m bowing beneath royalty. 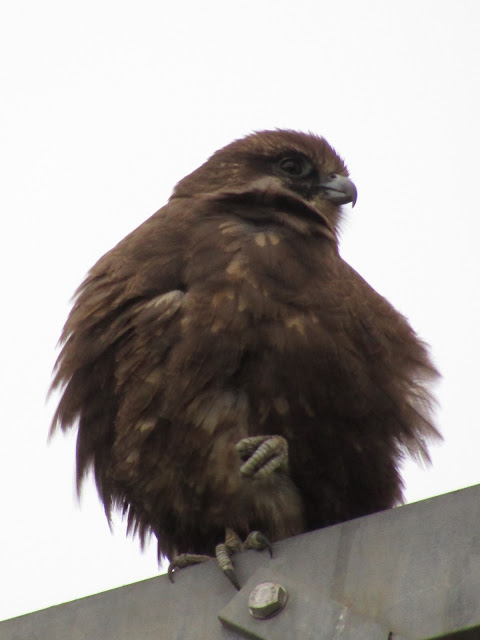 Email ThisBlogThis!Share to TwitterShare to FacebookShare to Pinterest
Labels: Predators