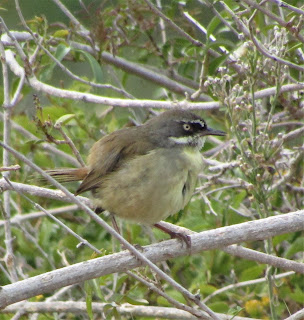 Every one of the last five years there is a peck, peck, peck against the metal of the pizza oven.


Pizza Oven Bird pecks the holes in the chimney for an energetic dust bath. Either that, or to take revenge on the rival he thinks he sees reflected back.

Like some strange musical instrument, the noise reverberates. The bird grounds itself in ash, rubbing its itches. 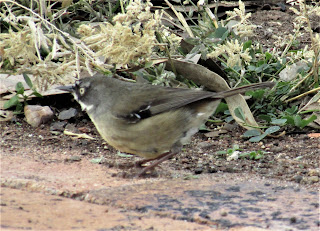 Animals like sand or dust baths; dogs, cats, elephants, peacocks, horses and pigs. Bathing gets rid of parasites, but this little bird is addicted. 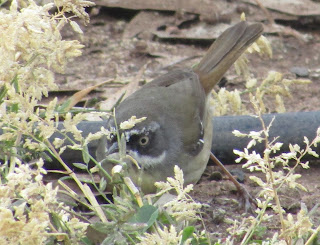 Pizza Oven Bird (or POB) can peck-n-bathe for over an hour. 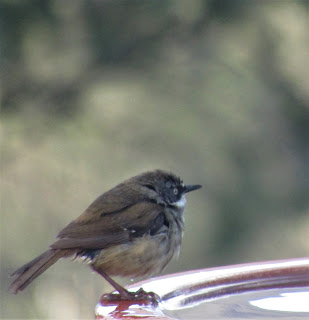 I thought it was a Southern Whiteface or Yellow-rumped Thornbill.

I wasn’t sure because the bird flies off when I’m in sight range. Even opening a window makes the little rat buzz away.


Despite binoculars, prescription glasses, a zoom lens and wasted time in stealth mode sneaking to see it, this itsy-bitsy bird is elusive. It has outwitted me.


The bird hides behind oven bricks, refusing to show while I stage a stakeout. Setting up the camera and leaving it to film, the only thing captured is three lazy bees and a large blowfly. 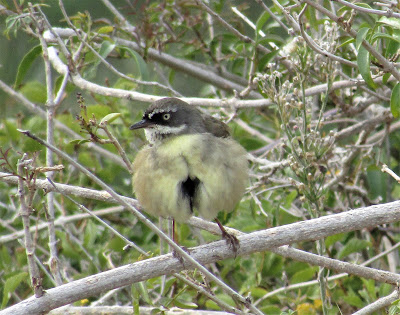 Hearing Pizza Oven Bird pinging away is annoying. My media player has 320 hours of music to drown out the noise. Even when blaring, it’s easy to notice the heavy-metal bath-loving mite in between songs.

Watering the garden weeks ago, a grey blob flew past my ear. Without noticing me, it started picking at the chimney.

I flinched and it flew, but not before I had seen its Santa Claus eyebrows and impressive handlebar moustache. Running back to the house, I hit the bird books for an ID.


Not rare, very common, it is a White-browed Scrubwren.

Michael Morcombe’s  Field Guide to Australian Birds suggests the White-browed is one of the most: “common small birds; only it’s rather secretive habits and preference for dense cover keep it from being more widely recognised...Always alert, scrubwrens usually give their harsh, scolding, chattering...alarm calls before they are sighted.’’

Hearing the Scrubwren cry out 20 ‘chur-weep’ sounds, I crept to the garden and caught it preening. A fortnight later I got a blink and you miss it grab of the same one on the oven.

So, how do I know it is the same bird?

I know the sound of his abuse, but these Scrubwrens also have only 1 dominant male and female in 1 big territory. His home zone can be a 5 km circuit of scrub. The cliff besides our house is steep, so steep that scrubby bushes are plentiful. This is the head honcho of his family group, and he'll live for 15 long years.

He will beat up any other male that comes into his space. I’ve even seen him beating up a Superb Fairy Wren. This guy attacks all comers, even those as big as I am. He squawks at kangaroos and all other non-meating-eating birds if they’re near him. He is a bit reticent to admonish Magpies and Kookaburras in plain sight, so hides in a bush and squawks abuse from safety. 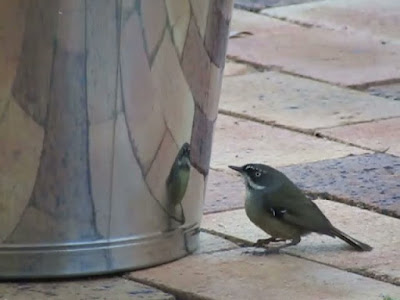 When winter began last June, we lit our fire. Putting a new bucket full of ashes outside to cool, there was a familiar ding-ding-ding. I managed the odd blurred photo of the speedster; filming it flying at the soot bucket as if it was the enemy.


We don’t leave the bucket out much as it makes some birds go gaga fighting, biting and Kung-fu kicking their reflection, particularly if they are the main man. When it isn’t there, birds peck windows or our stainless steel BBQ. 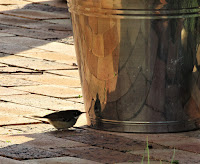 Watching POB beat itself up at dusk, two White-plumed Honeyeaters swooped down and attacked. Rolling the wren, they pecked and stomped the wee bird for making such a racket. 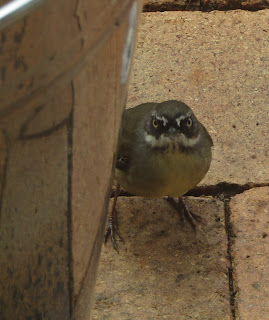 Rushing outside to shoo the Honeyeaters, I found the wren  roughed up, lying on his side.

Thinking it was dying, I picked him up. All of 4 grams, it seemed weightless. About to drip feed it water, the wren came to. Terrorised by a giant that had him in her hot little hand, the rascal bit me before flying away. Once landing, he tweeted abuse from the hop bushes.


That’s the moment I fell in love with this 11 cm long angry bird. 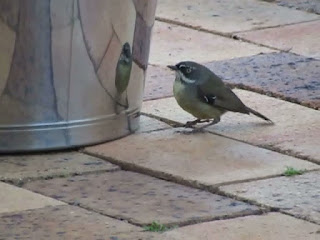 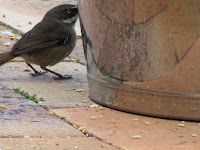 Sometimes I glimpse POB hiding under a cycad, or glaring from the Wonga Vine. Mostly, I just hear scolding. My family call it a little shit, but I like seeing the little twit. 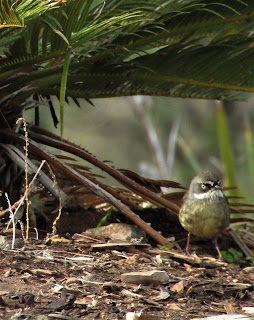 How couldn’t I love this ugly bird?

It is more spirited than a flock of other birds put together.

It has an incredible love/hate relationship with itself, and doesn’t even know about it.
Sipping coffee in the lounge room this morning, I look to see if birds are bathing in the icy weather.  Smoke appears to be rising. An ash cloud explodes from the bucket. POB the stealthy, over-cautious bucket-biting wren emerges and flaps away, leaving a trail of grey as he goes. 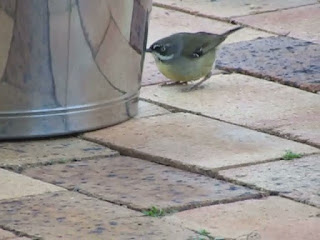 Almost pee my pants laughing. The still shiny bucket was out last night in sub zero temperatures, so no burn, but a bird never went inside before. That guy loves a dust bath, though it may have fallen too deep today.

The White-browed Scrubwren hates me with an intensity;
I can’t help admiring it anyway.
Posted by Therese Ralston at 14:01