The first week we had Professor Popplecock we plopped him in a goat transport cage. He was safe inside, protected from Rex; a dog trained to herd animals, a pet who wanted to eat the peacock more than anything. 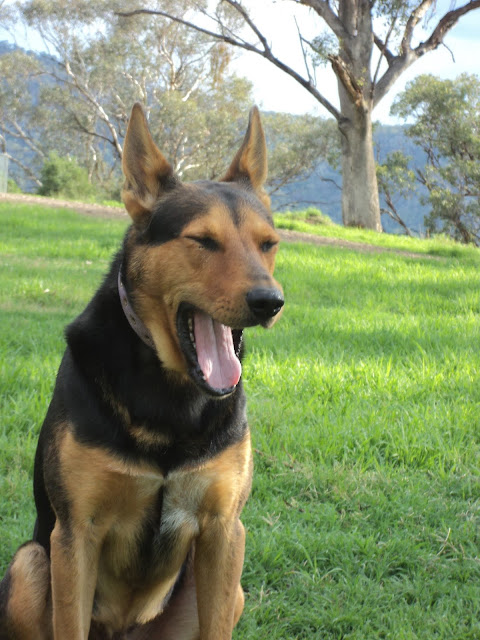 Authentication papers said Rex was a purebred Kelpie, only he was the biggest of his breed. A huge hunter, this hound couldn’t take his beady brown eyes off our blow in, the Indian Peafowl. Sitting outside the cage salivating and yawning made the bird nervous. Every time she twitched his doggie ears popped up; certain she was his next meal.

My brother-in-law keeps chooks. His good layers were happy producing gooey golden eggs in peace. Their cage was fox, goanna and Rex dog proof. BIL moved Professor Popplecock to this chicken coop. It was an avian holiday away from a dog who bared his teeth a lot. 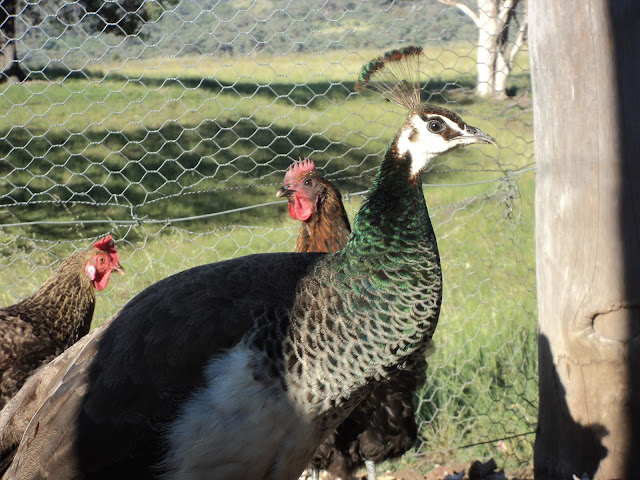 The chooks were unhappy. The Professor devoured the best morsels from the scrap bucket while the chickens warbled and clucked their disgust. The peafowl didn’t mind, he was 4 times their size. After practically eating BIL’s egg layers out of layer pellets, the big hungry bird was unceremoniously returned to us. 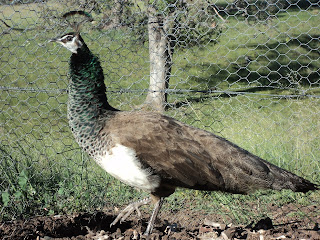 Professor Popplecock went back in the goat carrying cage. Hating it, he paced like an angry bird. When Googling what to feed him I discovered that he was a she.
Doubly shocked, there was nothing on the Internet to say Peafowl eat veg. Small insects, reptiles, grain, seeds, fruit and some leaves, but no mention of vegetables. Only, when I’d fed her veg scraps; she gobbled them quick and cooed for more.
As an omnivore, she would also eat small frogs, mammals and snakes. Peafowl apparently eat chili, tomato and bananas in the populated areas of India. I wish I hadn't scrolled down to discover the birds also gobbled human sewerage laying in the fields. I gagged.
Peafowl who eat people crap will eat anything. I added ground up dog biscuits to her diet. These smelled crappy, so she should have felt right at home.

A while ago we saw a David Attenborough documentary showing wild peacocks foraging near a tiger. Proof of a tiny brain when they couldn’t recall that the orange stripy things were apex predators. That evening, even husband agreed we had a pretty, but pretty idiotic pet.
Our daughter, home from university, pointed out that women usually made better professors than men, and that Professor Popplecock was a perfectly good name. I argued that it was too much of a mouthful when she was not smart to begin with. We needed something shorter. Down from 6 syllables to 2, we renamed her Poppy.
Things were good until I delivered her breakfast one morning. Bent over at the food dish inside the cage, Poppy Peahen took a flying leap over my head. 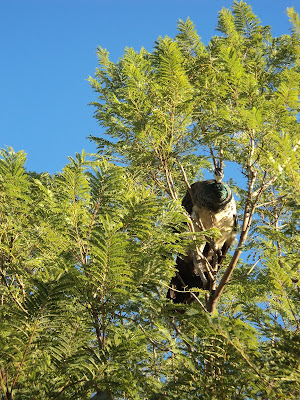 I heard the honk. I felt the whoosh. She was gone.
With help from my son, we spent 3 hours trying to catch her.
Round and round the garden like a stupid pair;
Round and down the cliff face, don’t forget to swear!
Since Poppy was back with us I had been slandering her. I said the she we assumed was a he was an imbecile. That a bird who plopped in her food and then walked through it was so stupid her species should be extinct by now. She was indeed dumber than a Dodo. 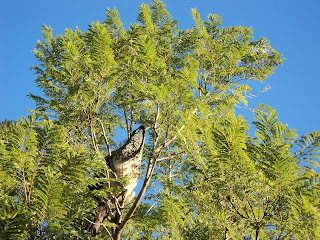 All afternoon I’d been wandering the garden; a deranged woman just like Poppy. Son tried to head her off but she squawked and shrieked too much; flying up, flying down and running while gobbling like a turkey. After 3 hours up a Jacaranda Tree Poppy still refused to get down.

Scratched from spiky native vegetation, we gave up. Too pooped to catch Poppy. Watching TV again later, we wondered if she’d gone for good. Every commercial break a family member chimed in with some cutting comment.
‘Poppy may be a dumb cluck but she outsmarted you, didn’t she mum?’
Five years on, I haven’t lived it down. No matter, I always knew I wasn’t the smartest peg on the clothesline. But Poppy did stay. She is still here in autumn 2019: a free-ranging bird. 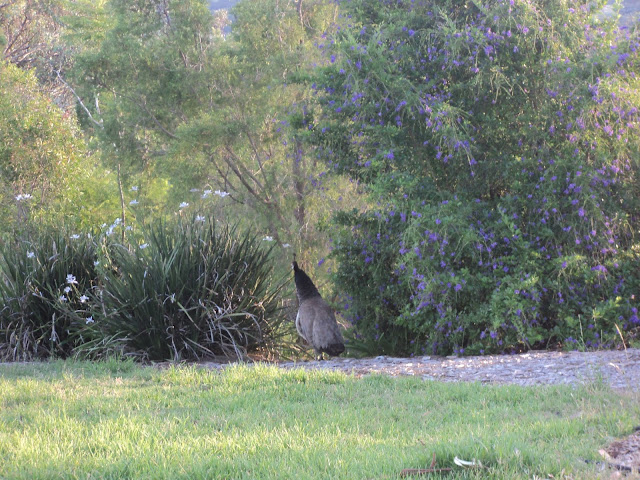 Unfortunately, her tiny pea brain has not become any more intelligent. Fortunately, I love her to bits anyway.
Posted by Therese Ralston at 13:28