Teaching Primary School, at least 150 kids surrounded a tree in the garden. 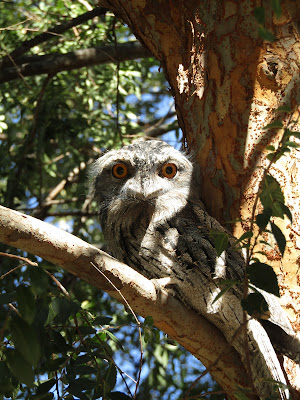 Before school the word owl ran through the school like a runaway train. The teachers tried to keep the children back; discouraging boys to poke it with sticks or climb the tree to touch it. That wasn't easy; especially when I wanted a closer look at the Tawny Frogmouth too.

Poor fella, he was startled. Completely nocturnal, it mustn't have been able to see or fly properly in daylight. It could hear kids yelling. Some wanted it as a class pet, others tried to scare it away. 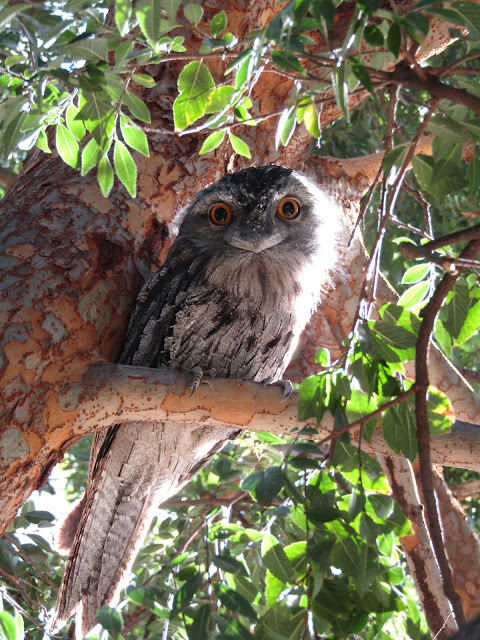 All morning in class I thought about the bird. All through writing about plants and how they grow, all through literacy and buddy reading. Then I taught them it wasn't an owl but a Frogmouth. A big headed bird with tufts of bristles like whiskers on his face; a bird who camouflages so well it looks like an old piece of wood or a broken branch. A big night hunter who silently glides down from a tree to gobble up insects, frogs, mice and tiny birds. Nothing like an owl, this creature has lots of different names; a Mopoke, a Morepork, a Tawny Frogmouth. I told them I've only ever seen them as the sun sets or at night. I described how their orange eyes even glow in the dark.


I was on lunch duty in a different part of the school. When we came back in for the middle session the kids said the 'owl mouth' was still there. One girl called it a 'scrawny owl' others said it was the 'grey owl bird'. All through our maths lesson I wondered if it would still be out there. 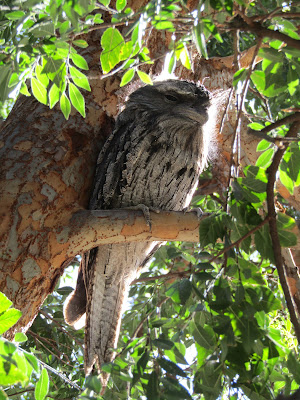 We'd studied how different types of ants worked for the good of the colony the day before. I'd promised the students we'd go on a nature walk to see forager ants and track where they went, though we'd run out of time for it. They asked could we do it today; I said yes.

Careful not to tread on small black ants, one boy got down so low he blurted out that he could see the ants borax. Tickled pink he tried to remember the right terminology, I corrected him to thorax. We watched those ants line up and head single file up the garbage bin to gnaw off bits of someones discarded cheese sandwich. We watched ants take crumbs down the same path back to the nest.

Heading near the trees, I asked the children to be quiet and make no sudden movements. They asked me questions in whispers. The Mopoke tracked us with it's yellow eyes, but was sleepy and eventually closed them. One child cracked a branch and the bird's giant eyes flew open again. 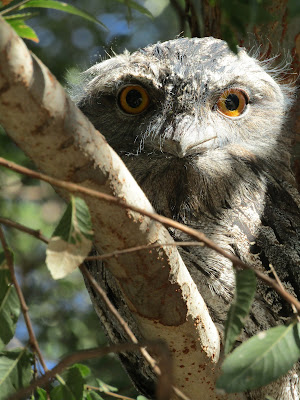 Beneath the garden a child found a hairy caterpillar trying to crawl out of it's rough woody cocoon. We watched that wriggling too. I asked them about the plants, seeing if they could point out the stem, the leaves, the flowers and where the roots would be.

The Year 1/2 class science unit was called Living Things, and the 10 minute mini-excursion kind of covered a fair whack of it. It was better to be out in early Autumn sunshine than stuck inside.

Half the class told their news and showed their toys near the end of the day. We played singing games and went on a pretend bear hunt with lots of giant actions and embellishments. One white-blonde girl said: 'Mrs Ralston, that frowny frog bird looked right at me and it's orange eyes were really, really scary.'

None of the children could remember it was a Tawny Frogmouth. There were so many versions of owl mouths and frog beaks and wood bird things that I gave up. I talked so much, I must have overwhelmed them with birding speak. Nothing has to be an exact science anyway when you're 6 or 7 years of age; it just has to give them a taster. They adventured, talked, asked questions, imagined and thought about a bunch of living things. It was enough. 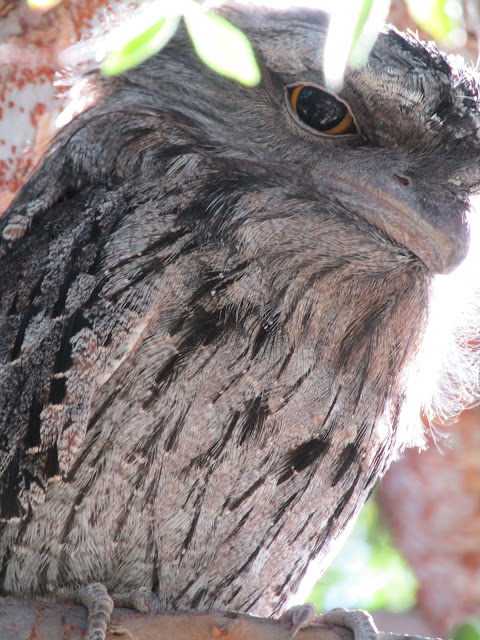 After I'd marked the students work and was ready to hit the road, I took the camera out of my car. Since last week's cloud of cockatoos I keep it there. Strolling down to the tree I kept wishing the tawny would still be there. It was. I zoomed in on those awesome eyes, and shot a few photos. 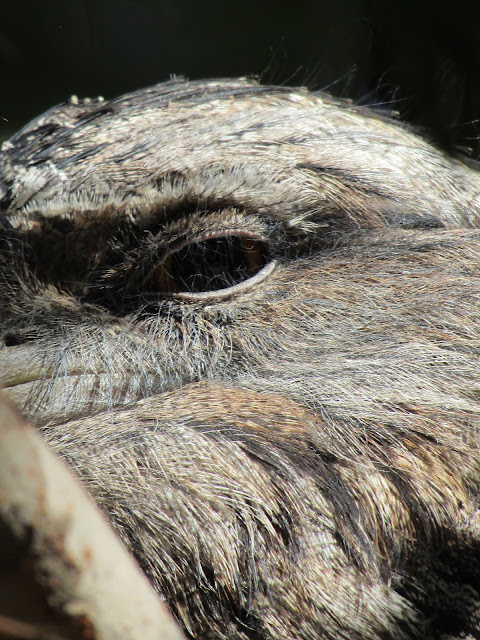 Posted by Therese Ralston at 17:35