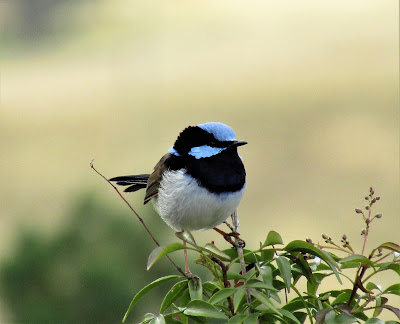 Winter started early with icy rain instead of sun. Things brightened up when I saw a family group of Fairy Wrens that live at the house though.
Despite the cold weather, these tiny things each take around ten dips in the bird bath every morning regardless of the temperature. 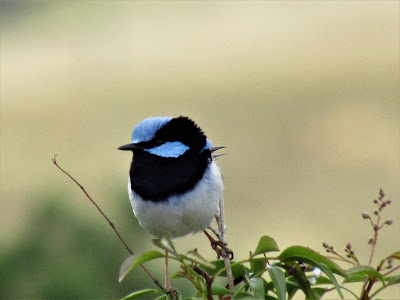 The older alpha male Superb Fairy Wren keeps his nuptial feathers, moulting straight from one to the next. His blue and black face stands out. 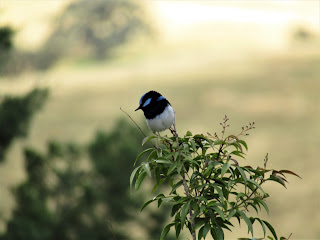 Male Fairy Wrens aren’t big on courtship, though some might hold a bright flower petal in their beak and preen a female just before they do the business. 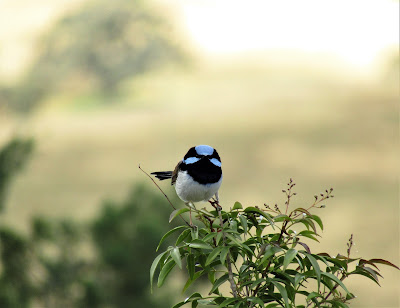 Unfortunately, a third of their body weight is taken up with very large balls.
I’m not kidding. 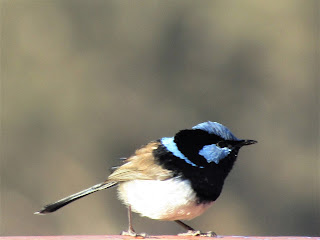 They are males on a mission to breed. The guys are devoted to copulation, chasing the females to try and get it on, protecting their territory, their alpha female or what they think is their own eggs in a nest. 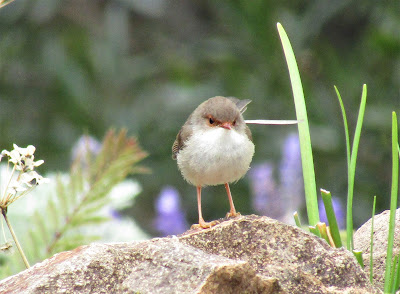 The females, who my parents called Jenny Wrens, are a little oversexed as well. They drive off other females from their territory. These plainer wrens are notoriously unfaithful and can have different mates for different eggs. The dominant female builds the nest alone; it can take days of hard work to make a loose grass ball of nest with a side entrance, all lined with cobwebs. 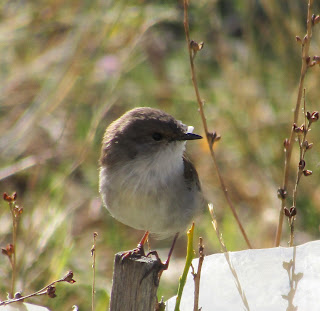 After the build the top female wren can wait a week before laying an egg each day.  She also incubates alone and feeds the nestlings for the first few days. 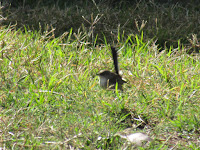 She feeds herself as well, though the male standing guard near the nest usually escorts her when she’s foraging on the ground. 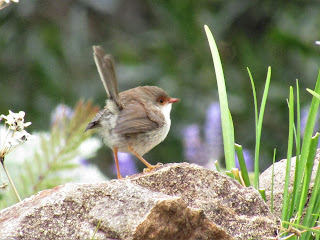 Redeeming themselves nicely, males start singing before dawn. They sing to the eggs to teach them who their daddy is before they hatch. They sing to advertise themselves and to declare the boundary of their terrain. 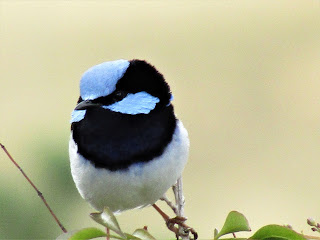 Most senior males sing to assert themselves as king of their wren group, or in territorial defence against other males. Rivals can even have song battles. They flatten those blue and black head feathers and flare their ear coverts to look more formidable. 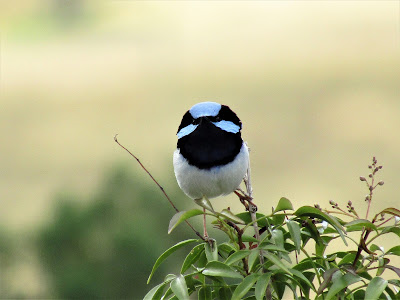 Despite all the infidelities, Superb Fairy Wrens stay paired in close knit family groups that preen each other in the middle of the day. Huddling together along a branch, they play a game of leap frog so every bird has their turn to be pampered.

With up to four broods reared in each breeding season, previous young help feed the next lot of chicks. It’s really a Blue Wren community when they huddle to rest in the heat of midday. 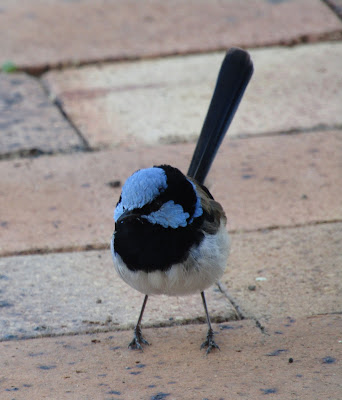 Always moving, it’s hard to grab a photo of these superb little guys when they won’t perch for more than a second.  Both sexes flit about constantly, grabbing insects from the garden. Hopping, bouncing, wagging pert tails side to side, they were fun to see. I end up snapping a lot of bird backsides. 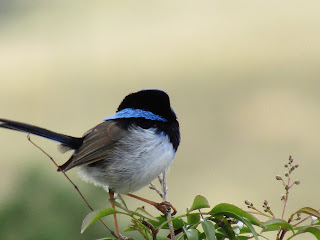 I knew there were fledglings somewhere, but had only heard them until checking the rain gauge. Four tiny wrens, all plain like females, emerged from under the shrubs. 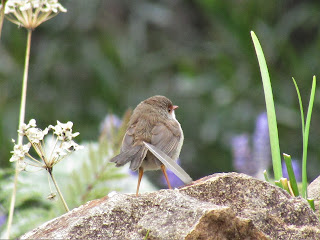 Smaller than adults, at 7 cm they looked exactly alike, even jumping in unison. Chirping constantly, the nest mates explored the grass under the Jacaranda for things to eat. 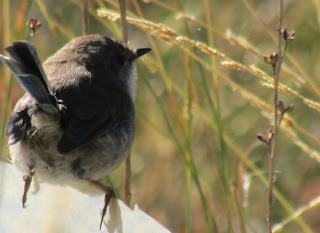 They weren’t old enough to have the blue tails of juveniles yet. Bobbing in unison, they reminded me of kindergarten friends at school who copy the other’s way of moving about when they play, keeping in step with each other.

I didn’t dare move. Those Blue Bonnets with bodies like pompoms and long stick legs are very flighty, even for birds. Watching the superb four while standing as still made me smile. 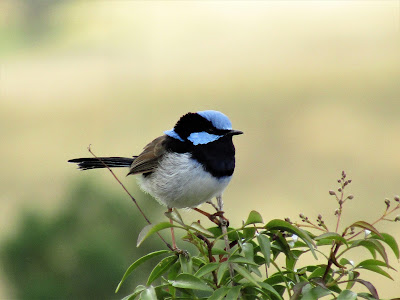