48. The Wagtail and the Wallaby 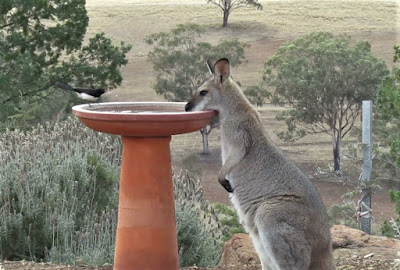 Willie Wagtails are aggressive when breeding. The Willie that’s lived in our front yard for 3 years is nesting now. She wanted a drink and harassed a wallaby to get one. 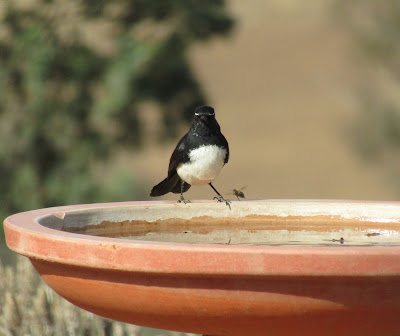 Also called the Australian Nightingale, a Willie is a fantail that attacks anything near its nest; predators like eagles and magpies as well as bigger old birds like me. Once, after taking photos of it bathing, it flew overhead and tried to scalp me.


I’ve been dive-bombed a lot in the 3 years since this bird became a resident of our front yard, but I didn’t think it would try to shift a Wallaby. 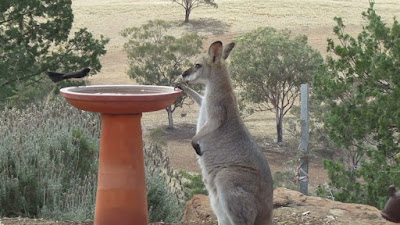 As both male and female nest build and feed the young, I don’t know if this is a Will or a Wilhelmina. But while I filmed a Red-necked Wallaby having a drink it went on the warpath.


The crazy bird flashed past, flying over and swooping repeatedly before eventually dropping down to the bath to wet its beak.

The animal was more worried about me and the camera 3 metres away. Survival is the most important thing and the wallaby needed water desperately.

In our long NSW drought, available water has dried up. The creek that winds around the mountain we live on hasn’t run in 3 years. The dams went to mud, then cracked earth. We had bores drilled down 150 metres, they tapped  into the underground aquifers.  Drilling was expensive that deep, it was a worry when every metre down cost another thousand dollars. Troughs kept full of this water has kept our cattle alive.


Scared of humans, these beautiful wallabies are wild animals who always hopped away from us before. I hardly saw them outside dawn or dusk until this drought started. Nervous grazers, these night feeders frighten easily.

This wallaby arrived at lunchtime. It was aware of me, but also knew it couldn’t go on without water. I keep water dishes topped up around the house; it’s the least I can do to save things. 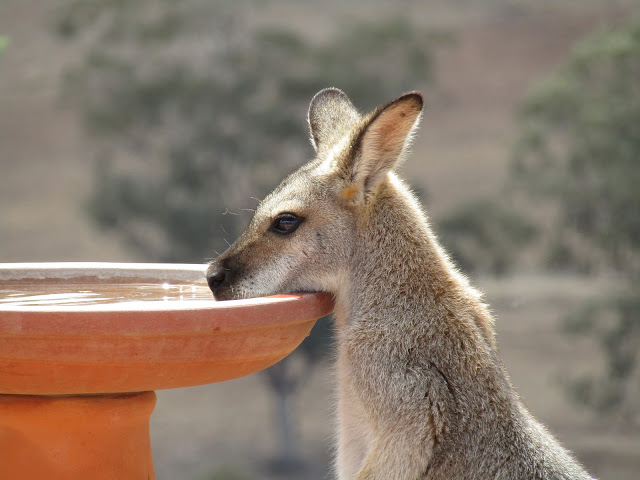 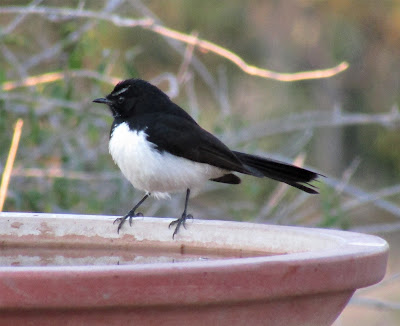 The Willie Wagtail believes the birdbath is its personal property. Often standing guard next to it, this little black and white bird is surviving too. Not only that, it is breeding the next generation of cranky Willie Wagtails.

Hard to photograph, fantails move constantly. They flick from side to side, hawking and diving on insects eaten on the wing. 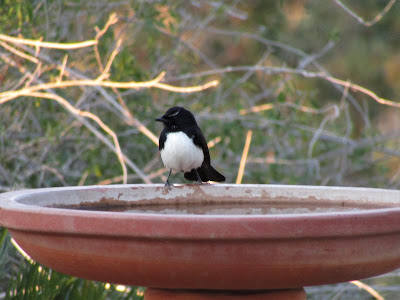 The other night, with the bright moon in a clear sky, it sang from the nest. At 3 in the morning, I heard it serenading the eggs through my bedroom window. It kept me awake, but when I gave it my full attention it turned into a lullaby. 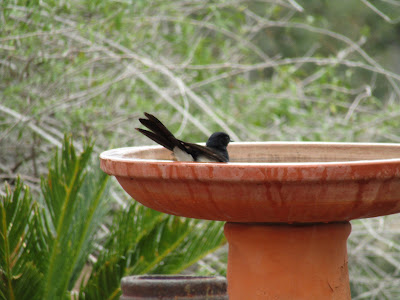 A wallaby leaning on a birdbath for a long, cool drink at midday? 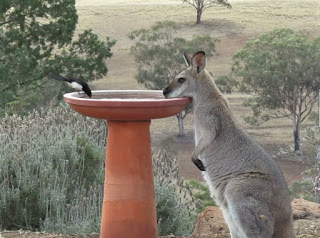 The chances of these things happening are a million to 1.


How lucky am I to have those experiences?
Posted by Therese Ralston at 14:58