When I was small, my parents told a pre-me love story. They had a Budgerigar as newlyweds. The bird thought it was human.

With a cage door permanently open, the little blue came out a lot. Except for owls and other night predators, birds are morning dudes. Bluey used to land on the pillow between the people who’d later be my mum and dad. 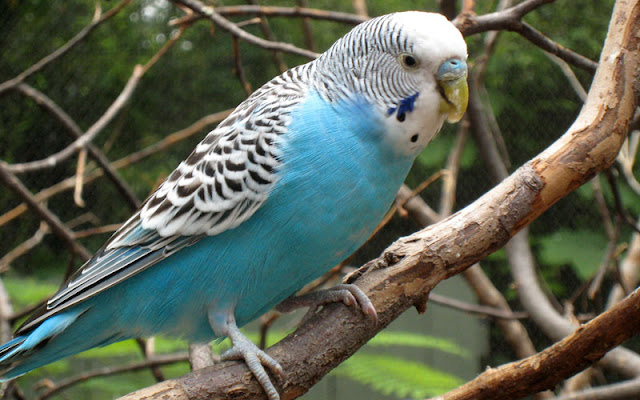 If they didn’t wake instantly, Bluey chirped in their ears. If he was ignored, he nibbled on their earlobes or gave them a kiss. That might not seem so bad except for the fact that Budgerigars have tongues like long grey worms. If Bluey still lacked attention, he squeaked out his one word of hello; repeatedly, getting louder each minute.

When you’re 5, there’s an undeniable tendency to fall in love with stories told by those who love you most. I wanted my own pet blue budgie. Unfortunately, I also wanted a Little Penguin, a chimp and an elephant; though the logistics of keeping any of those in the city were slim.

I had pets growing up; goldfish, a mouse, guinea pigs, a kitten and a puppy. I didn’t end up with a budgerigar until I was 20. Since then I have made up for lost time.
Posted by Therese Ralston at 20:00