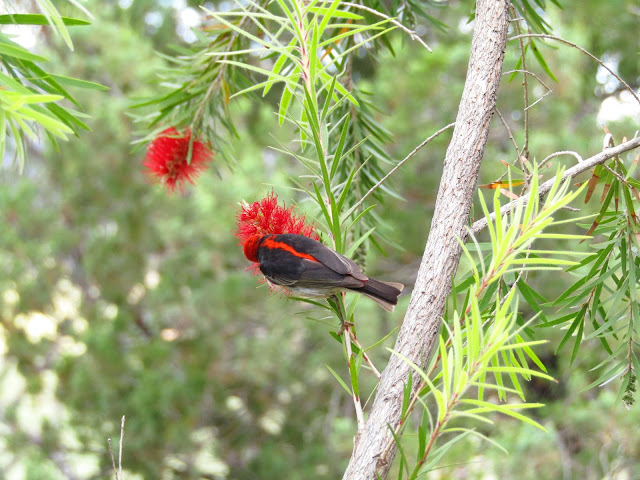 You rarely see something so enchanting it seems like an illusion, but that’s what happened last spring.

I was outside checking out the Bottle-brush trees when a red pompom zipped past me. Didn’t really see much, the bird was so fast it blurred. Then I caught one sipping nectar. 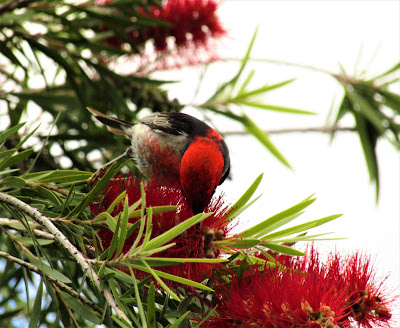 Tomato red, black eye band, grey-white belly-the loveliest creature I’ve ever seen. I think. It didn’t keep still for a millisecond, so I couldn’t see the whole thing, just a touch of bright beauty as the bird flashed past. 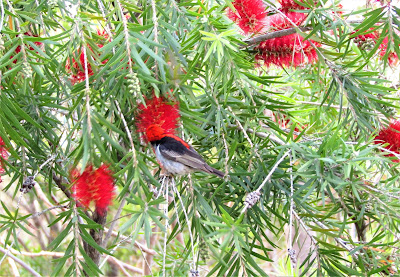 I walked to the bottom of the garden where the Callistemon were blossoming. These whizzbang birds were completely focused on drinking, and had brilliant camouflage amongst the red flowers. 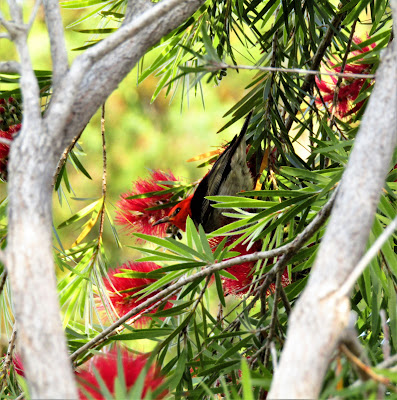 The air was abuzz with bees and hazy with pollen. There were also more fast red blobs with long curved beaks and pert grey tails. 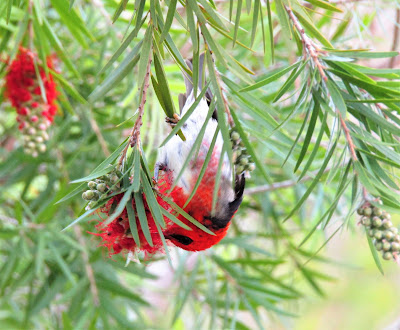 I suffer from hay fever in spring. Being in the garden gives me watery eyes, a scratchy throat, itchy ears and a constantly runny nose. If I stayed out too long, I have massive sneeze attacks. Loud too, mine were more like nose hurricanes. 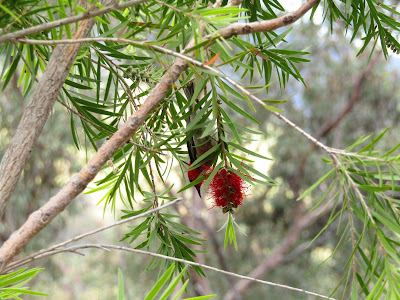 I’d never seen Scarlet Honeyeaters before. They seemed like Australia’s answer to the hummingbird because they actually hovered. 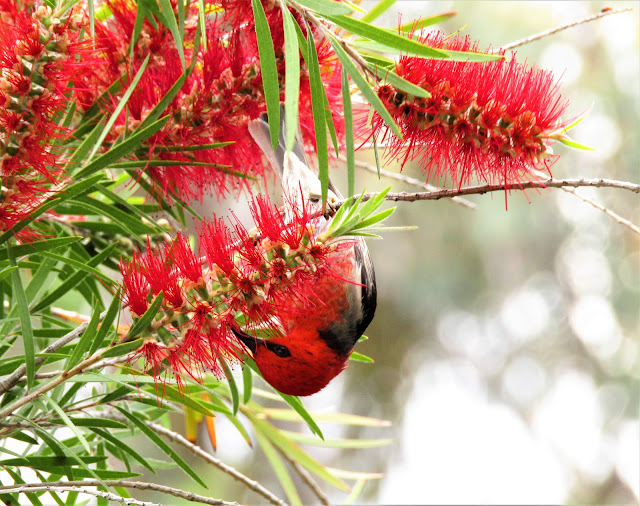 This hot red fluff-ball wouldn’t stop flitting, bouncing, bobbing, clinging and licking nectar until its attention was grabbed by a bee. 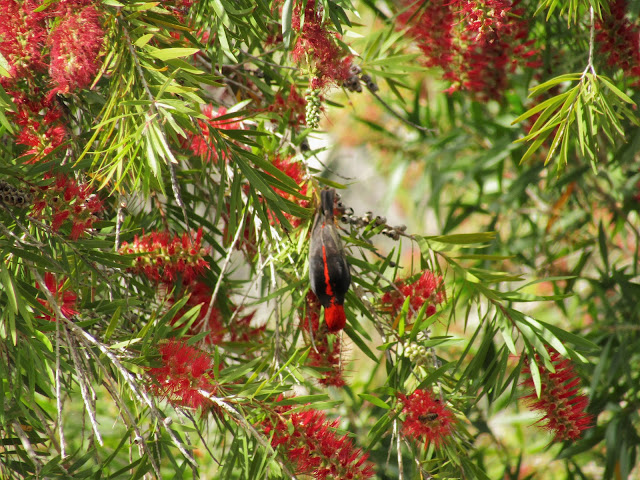 Just in front of my face, I had a bee and a bird watching a bee, both hovering mid-air. Straight on, with such a narrow head, it was dainty and quirky and as cute as. It saw me just as the bee made a bee-line for my nose. We both jumped and Scarlet buzzed off. 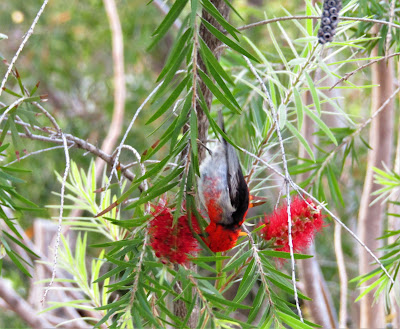 This is the smallest of our honeyeaters at 10 to 11 cm, or a bit more than your longest finger. 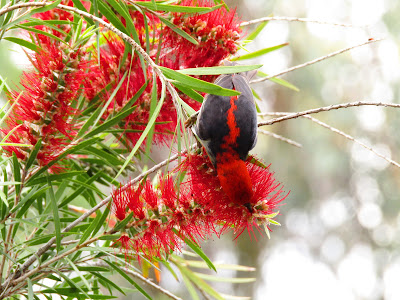 There are lots of other names for these dynamic movers and shakers, such as the Bloodbird, the Crimson or Sanguineous Honeyeater. 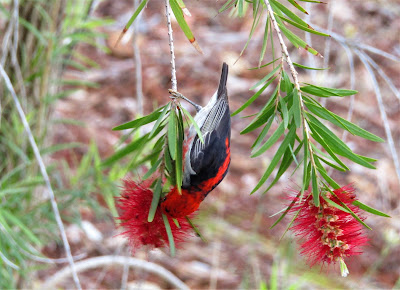 Try as I might, I couldn’t get a decent photo. The bird was upside-down, right side up but obscured, sideways, hovering, jumping, moving constantly. By the time I had one in focus it had shot through again. In the end, I took videos.

Fast, huh? The strange noise you hear is the bees that are also attracted to the nectar laden flowers. I usually couldn’t get within 2 metres of most birds. This time my face was in a shrub watching 1 or 2 or 3 less than an arm’s length away. 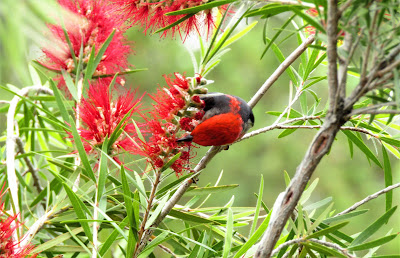 If I stayed statue still, the Scarlet Honeyeaters didn’t notice me. Not being an edible flower full of nectar really helped. And, though I snapped off 50 photos, about 40 were a red/black blob where the bird was moving as I clicked. 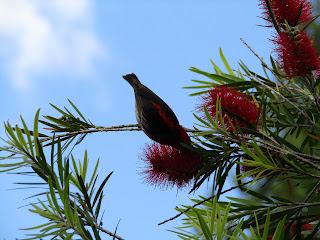 Meanwhile, my nose was tickling, prickling, building up to a gargantuan sneeze. I wanted to stay in the magic because these tiny birds were awesome to watch.

The Scarlet O’Hara of birds, even though all the red ones were male. I saw stacks of females with a red blush on their chin and white underparts, but mostly they were plain olive-brown, indistinguishable in the foliage. 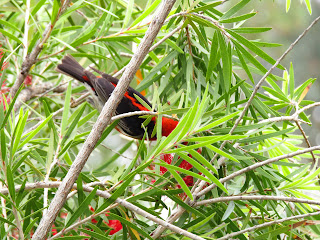 I’d never seen such active birds; they would drink anything under the table. Nonstop Crimson Honeyeaters. They were beautiful, they were entrancing, they were…. Ahhh-chooo! 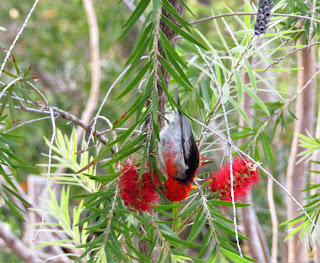 It was the ta-dah moment when the dazzling assistant emerges from the magician’s box that’s been cut in half. Sixteen red pompoms flew out of the bottle-brush. At least ten brown females went with them. Abracadabra. I laughed so hard I nearly choked, not realising so many birds were in there. 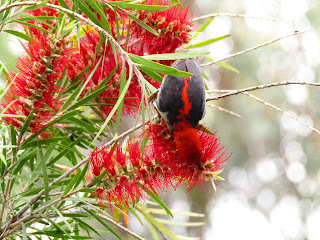 Then it was just me, the flowers and the bees. No birds. 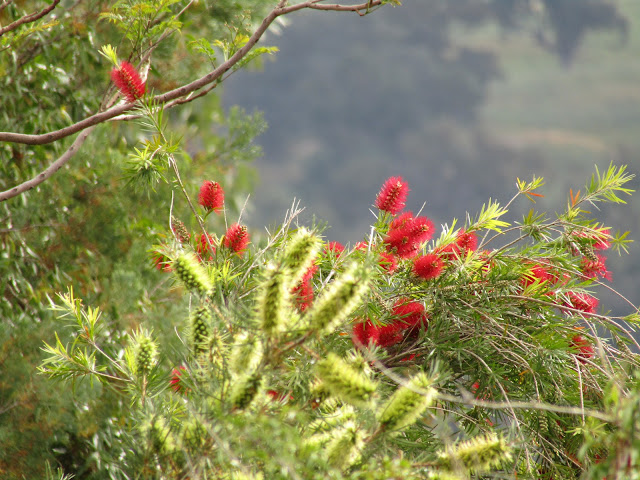 With snotty nose and weeping eyes I was still a truly happy birder.
Scarlet hay-fever or not, I glimpsed a thing wild and free, as lovely as can be.
Posted by Therese Ralston at 15:40