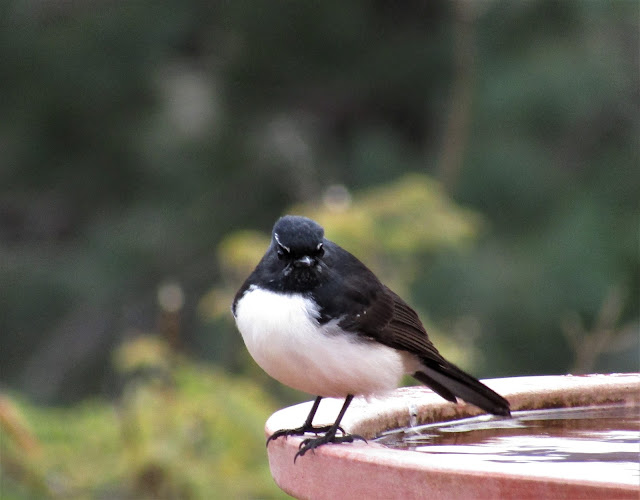 We have a high walled courtyard off the main bathroom.

When my children were preschoolers, they planted a branch of cypress there.

Surprisingly, a pine tree grew. It must have come up from a seed on the stick.

The kids thought themselves master gardeners, especially when a pair of Willie Wagtails built a nest in that pine. 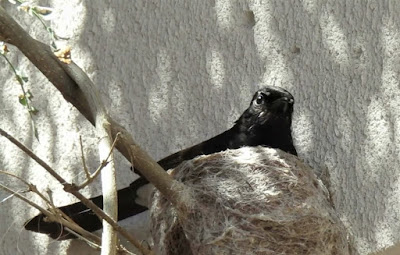 We gravitated to the bathroom, watching the birds sit tight on the tiny bowl. Once the eggs hatched though, the Willies became the mother of all birds.

At first, we could barely see beaks stretch up to be fed. After a week she flew straight at the glass doors anytime anyone walked into the bathroom. 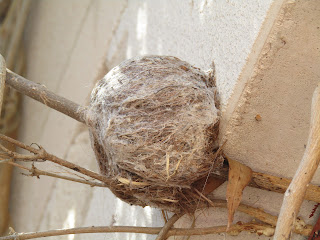 The cranky chirps seemed like bad language. These Willie Wagtail parents could have filled a swear jar. My son had just started school but was scared to use the bathroom. My daughter was 3, and terrified to wee. I’d find her holding on for dear life because she didn’t want mad birds flying at her. 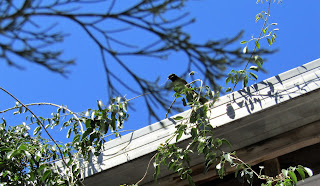 My kids were continually dive-bombed from the courtyard. Though the Willies were outside and the children were in, those black and white feather balls waged full-on attacks. 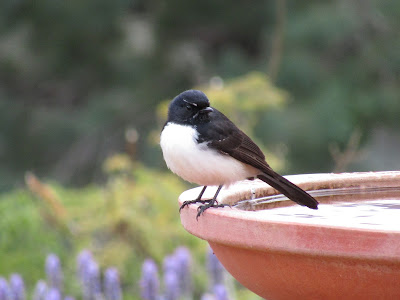 Helicopter parents, soccer mums and hockey dads; none of them have anything to rival a pair of nesting Willie Wagtails. They are fearsome for their size. 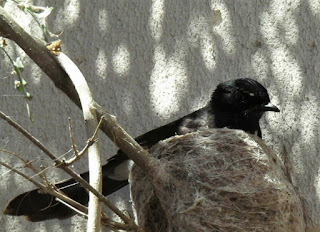 When I swished a hand at the birds and stared her down, she or he would fly off. Half my size, the children were picked on and the birds were merciless.

Toilet training was over for good, but one November a long time ago I still had to accompany my kids to the bathroom. 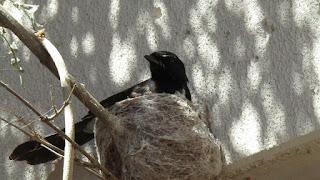 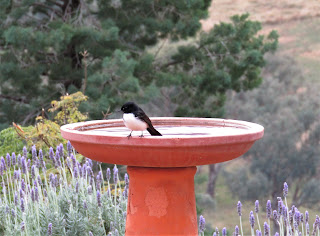 We’d sneak in and spy the chicks testing their wings on the rim. The nestlings flapped excitedly, building up strength.

The parents used spider webs to sew their babes feet into the bottom of the nest; they can only fly free when strong enough to break the binds. Once they had feathers they looked cute begging food. 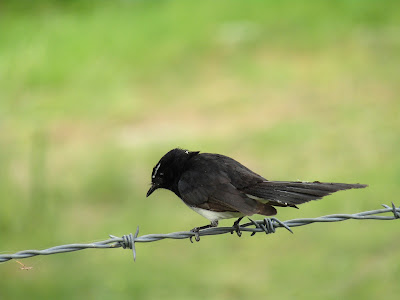 Everybody looks back on certain times with their children as the best of times. Despite having to act as an arm waving bathroom body guard, the Willie nest outside the bathroom is a favourite time of mine.

Normally Willie Wagtails are wonderful, the most self-assured birds around, they make their presence felt and act as if they are royalty with sole tenancy of all territory.
They are beautiful to watch when not dive-bombing.
The pine grew tall and was chopped down in case the roots invaded the sewage and water pipes.
My son and daughter grew up. Birding, photography, then blogging became my hobbies. I washed my hands in the bathroom an hour ago. A Willie Wagtail hovered outside the glass doors. 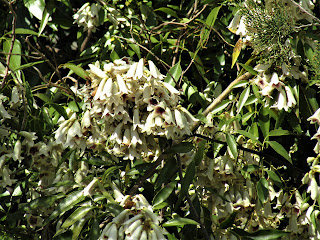 Then came the admonishment. 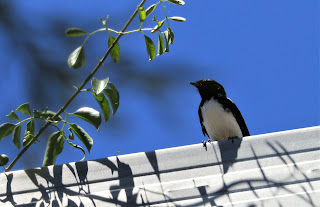 I went outside. Sure enough a small, bowl shaped nest rested above the glass door, partially shaded by Wonga Vine growing above. 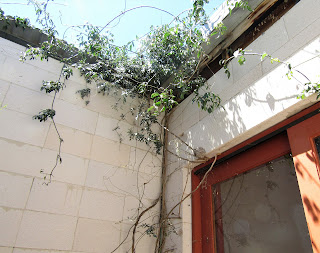 I start taking photos when a cranky Willie came back. It wanted to swear-chirp at me, but had a mouth full of nesting materials which made it tricky to open its beak. Setting the camera to video on a tripod, I leave them be. 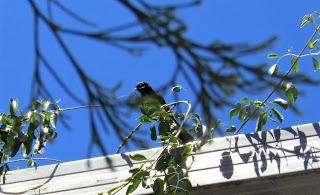 There aren’t many pictures as I don’t want to deter the birds. I’m unsure if there are eggs in the nest yet, but by the look of the video, (attempted live bird-sex, or just mating again to be sure, to be sure?) there will be soon.

Out to retrieve the camera, a Wagtail parent returned to prance along the roof, waiting for me to leave. 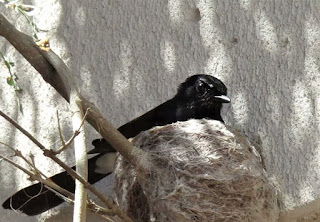 They’re busy birds preparing to raise chicks and teach them how to be the crankiest other little birds in Australia. 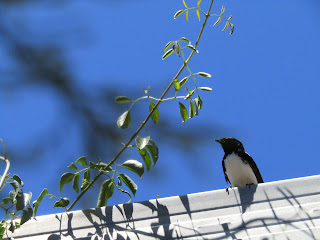 So, 23 generations of Willie Wagtails after the first, another pair is nesting outside our bathroom. What can I say? I’m loving it. More photos, blogs and updates to come. 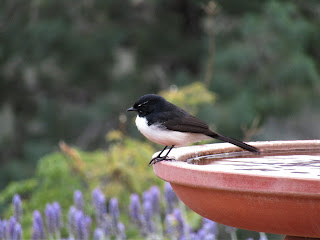 This was written but unpublished in mid November, I wish I could tell you there was a happy outcome. What happened was a dramatic change in the weather. We had no rain, but 10 days of intense heatwaves as if it was midsummer not spring.

Where I live in north-west NSW the mercury rose to 41 degrees. In South Australia, it got to 47 degrees, a temperature that could kill you if out in direct sunlight for more than 15 minutes without water. The late spring heat was relentless and draining.

The tiny nest faced west, getting the full brunt of 35-41 degree afternoon heat. The eggs must have cooked solid, and the Wagtails abandoned the nest.

I still see them around the house, and think they chose a Cypress Pine in the backyard to nest in. And a week ago I heard the unmistakable sound of a Willie singing in the middle of the night.

The males often sing to their eggs, so when the nestlings hatch they recognize his voice and come to his call. It is lyrical and beautiful, the softest lullaby to take me back to sleep again. It is really an enchantment in the dark. 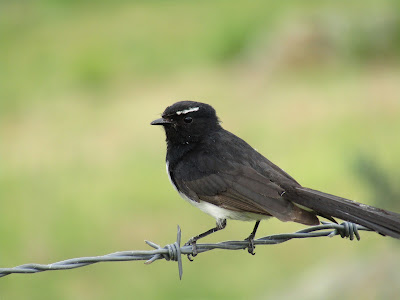 I have also heard the Wagtails swear at every other bird, big or small, meat or seed eater that comes near them when nesting, so I think they got even busier making another nest. 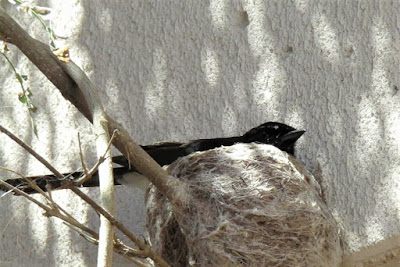 In nature all life is tenuous. We do what we can to strive and pass on our genes to the next generation. It is the best way, the only way, to snatch a small piece of immortality.

2020 has been a shit of a year, it is even ending badly with dreadful new waves of coronavirus; but as with the Wagtails, life goes on.

Nature will prevail, the birds will keep popping out eggs wherever and whenever they can, given half a chance of hatching.

I hope 2021 is so much more, so much better, healthier, happier, more productive and fun for all of us. Freedom from Covid-19 and its devastation is something we must look forward to.

Just as the male Willie Wagtail sings lyrically in anticipation of the babes that will hatch in the nest it sits on through the long hours of a dark summer night. 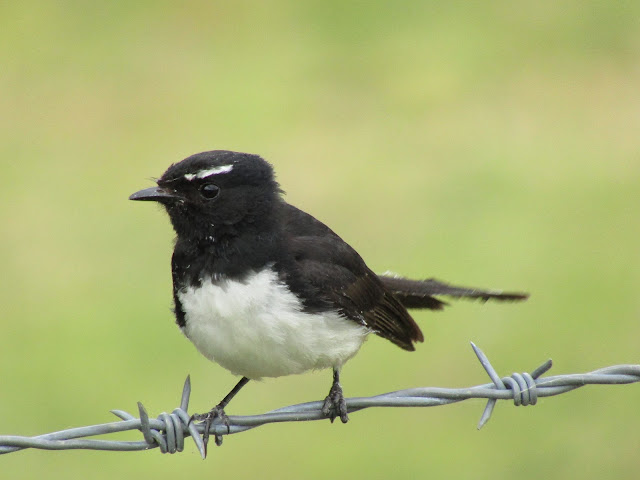 HAPPY NEW YEAR- A toast to new days, new friends, old friends, family and love and all the vivacity and verve that 2021 may have for us all.

Praying, hoping, wishing for great times, good health and an abundance of glorious birds, animals and the beauty of nature ahead for the next 12 months.

Posted by Therese Ralston at 16:38