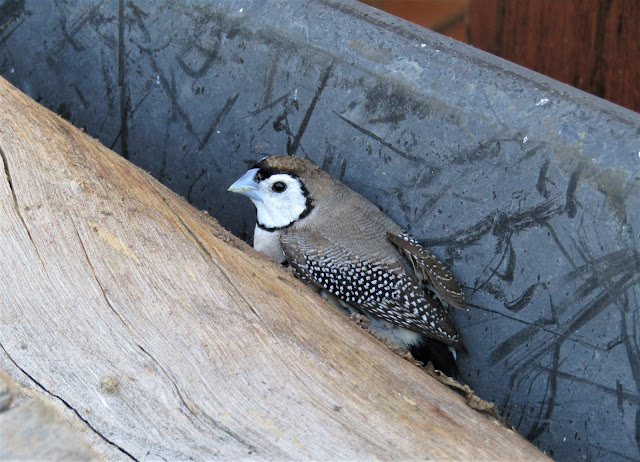 I heard a plaintive cry outside the lounge room. It usually means the finches are in danger; that either a goanna or a snake threatened. 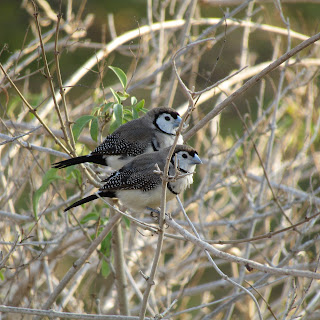 Looking outside, I couldn’t see either. Then eight finches flew up from the wheel-barrow, surprising me. The first weeks of October have been incredibly warm, but there was a cold snap at end of September. Firewood was still stacked outside. 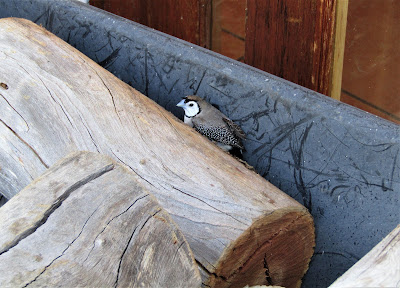 Next to the cut logs was a tiny  Double-barred Finch. It’s wing looked broken, though I wasn’t sure. Completely motionless, the bird must have hit the glass door. Its family flock were encouraging it to fly. 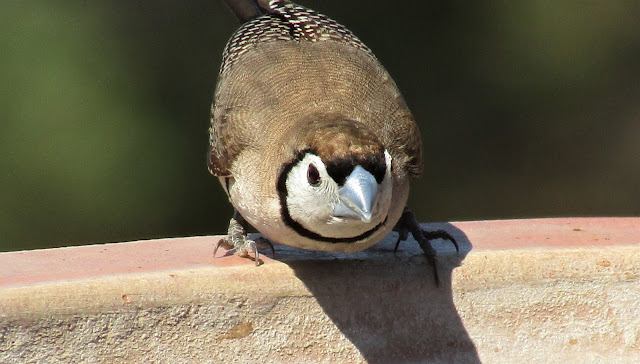 Around the house today, I’ve seen a Wedge-tailed Eagle, 4 Magpies, 2 Whistling Kites, an Australian Raven on a noisy fly-past and 2 Currawongs; all meat-eating birds. Any of them would devour a finch out in the open. 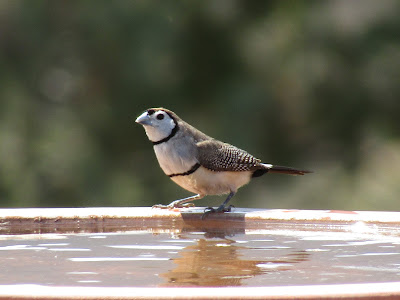 Sometimes when I’m not sure what to do, I stay still, wait and think. I’ve had lots of these little chaps die on my patio after window collisions, but most birds come out of the coma and live if they haven’t hit too hard. 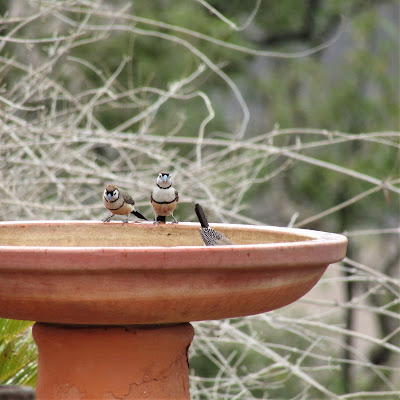 Like the rest of the Double-barred Finches, it had speckled wings and a blue beak. 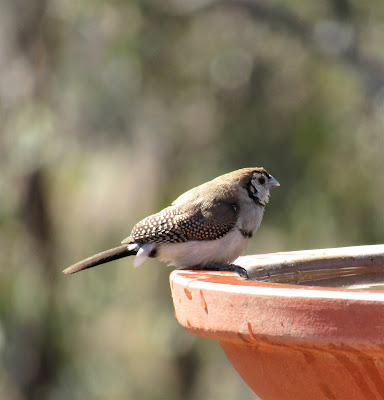 After 2 minutes I had already fallen in love with it, the same way I fall in love with seeing finches play around the birdbath every day. 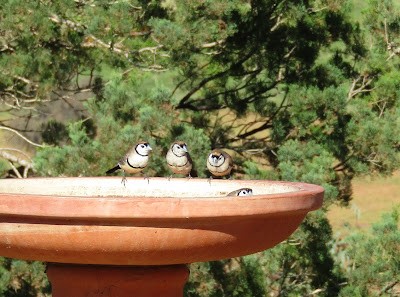 These birds stay crammed together in a round sleeping nest, are prolific breeders and stay in extended family groupings.  Unfortunately, they are not great flyers. 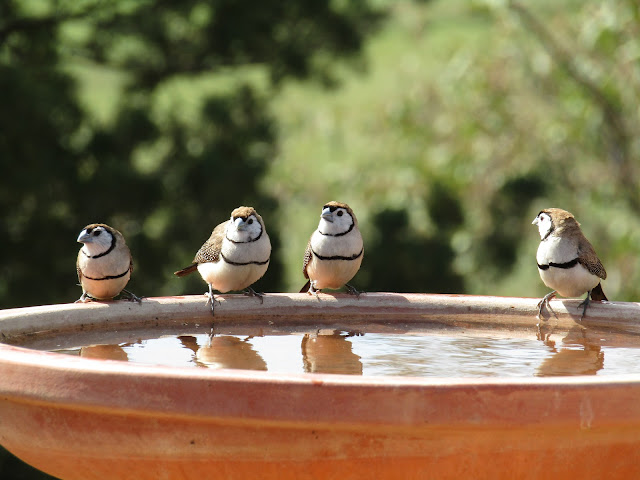 This finch had just had a wash and looks wet and vulnerable. 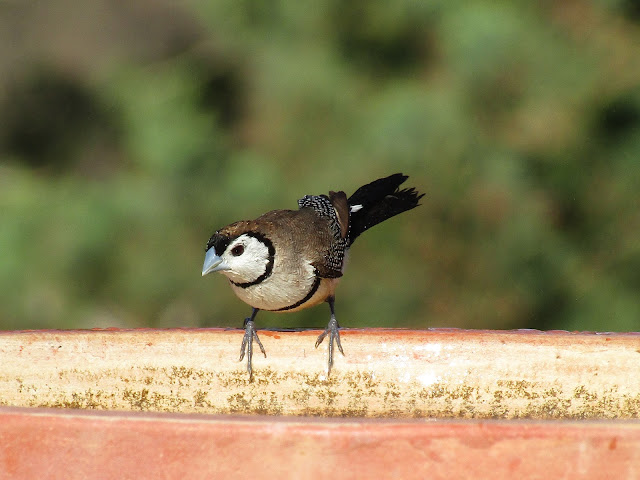 There is safety in numbers, so they usually never bathe alone. 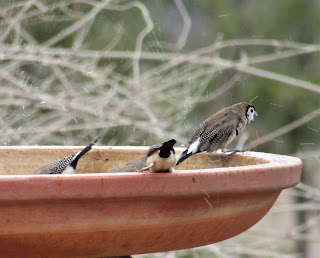 One of my Twitter friends said they look like someone has taken a black Sharpie pen to their breast; drawn a bib and given them a little owl face! 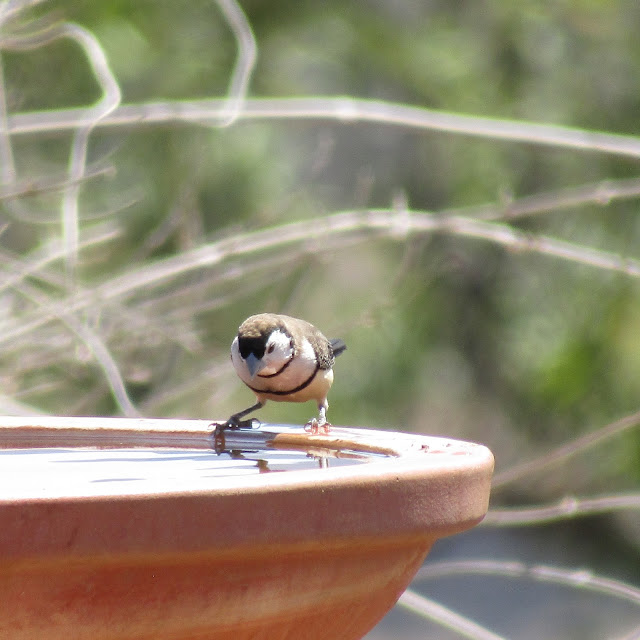 I’ve seen 12 finches lined up at the bath like so many small clowns. Below there are only 6, plus 2 Diamond Sparrows and a blurred wasp that has them worried. 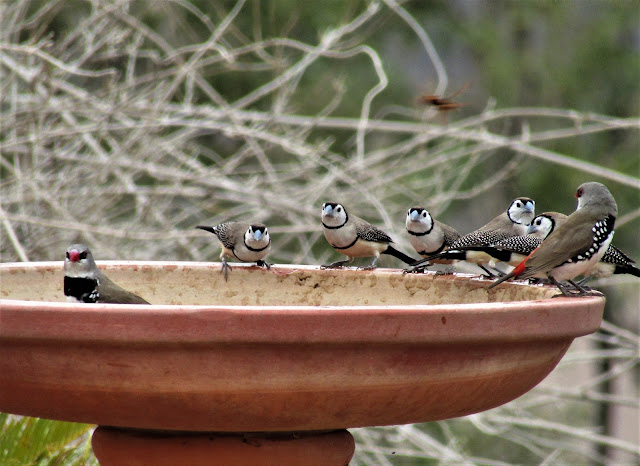 After ten minutes, the finch is still in the exact same position.  Not taking many snaps, I didn’t want to frighten the creature about the length of a small computer mouse and half its width. 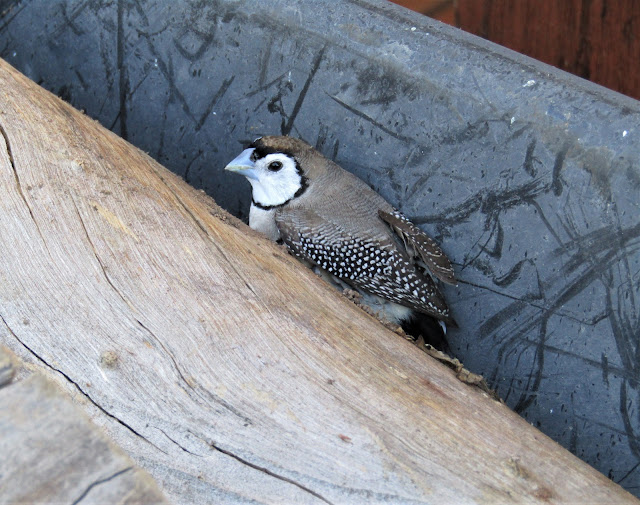 Double-bars need to drink every 90 minutes or so.  If they go longer than 2 hours without taking in water, especially during summer, they will perish. 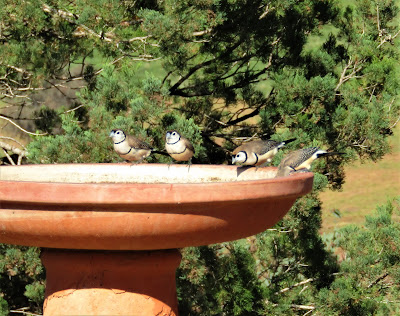 I’ve seen them at the birdbath in heatwaves and dust storms, even 50 km winds won’t stop them from getting a drink. 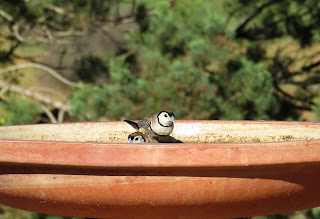 Camera shy, they fly off as soon as someone steps outside. But, if I sit still and quiet for 10 minutes, they fly close and bathe without a worry. 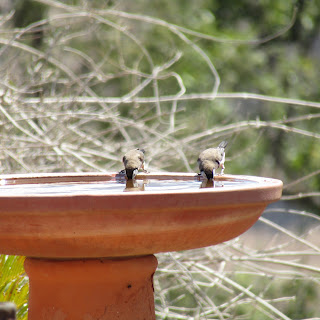 When weeding in the garden and not looking at them directly they hop in the misty edges of the hose less than a metre away. They get used to me, but being stared at makes them feel like prey; it helps if I wear a big, floppy hat. 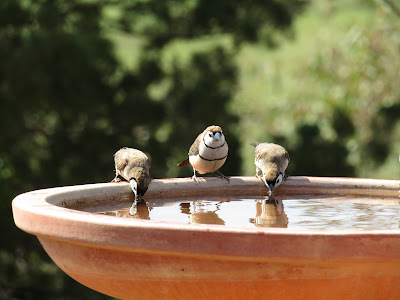 These finches are the dearest little regulars at my house, after establishing their territory here about 4 years ago. They depend on me to refill the bird bath; a little chore that I couldn’t be happier to perform for them. 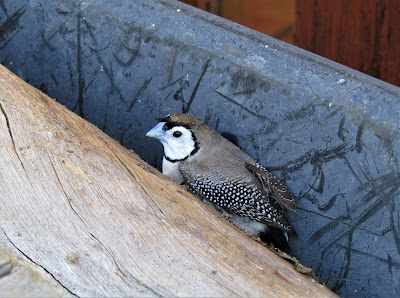 If the TV is on, looking out at the Double bars is usually better than anything I see on the screen. Often one bird jumps the queue and the others rouse and peck it as punishment. Most of the time though, they depend on each other. 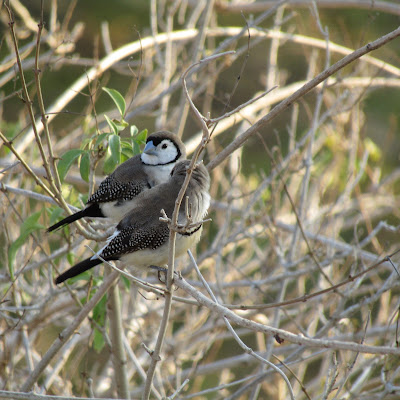 After a 20 minute vigil babysitting the finch, it became more alert, looked around and checked the sky, jumped straight up then flew away.  Fine except for what must be a mighty headache after crashing, it was terrific to see a cheeper so close and personal. 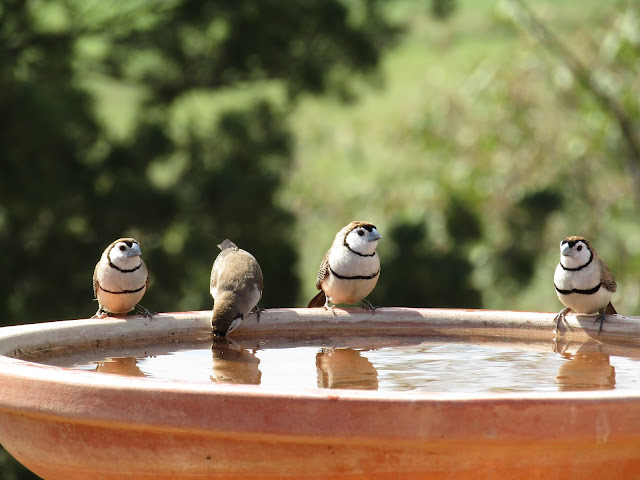 A good outcome, it makes me feel good to help save one little life. 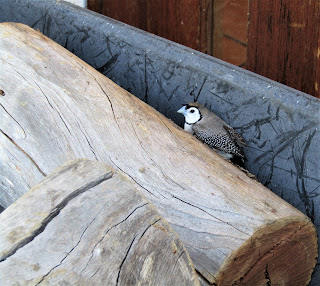 Posted by Therese Ralston at 14:27