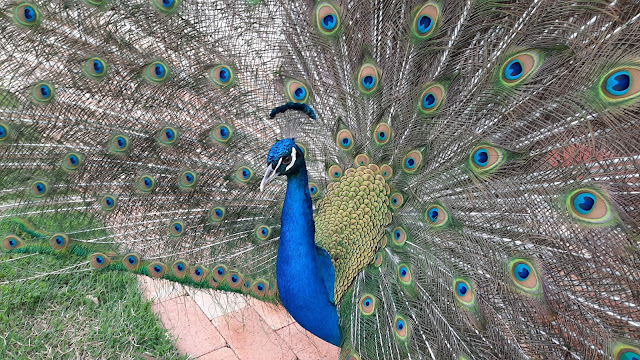 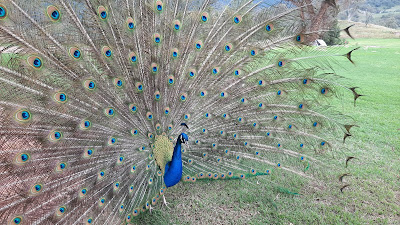 He’s never looked better.
When there’s a loud noise he honks or shrieks with over-sensitive hearing. 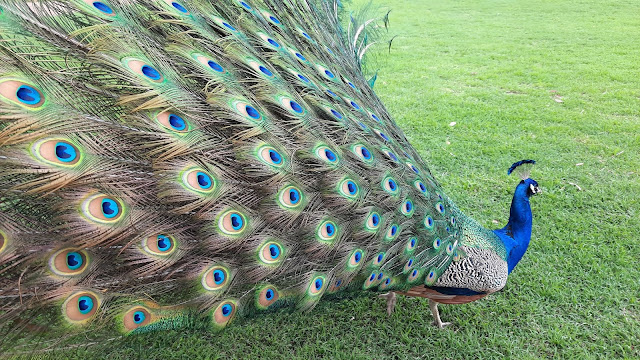 Pops is ready to go-go, but the Peahen isn’t. 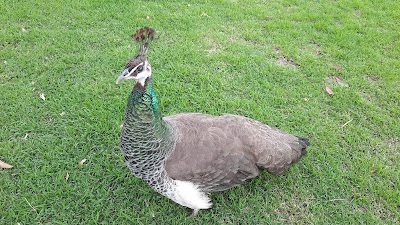 For peachicks to hatch the eggs must be kept a constant 40 degrees.

With rainy days this week the average temperature is only half that. 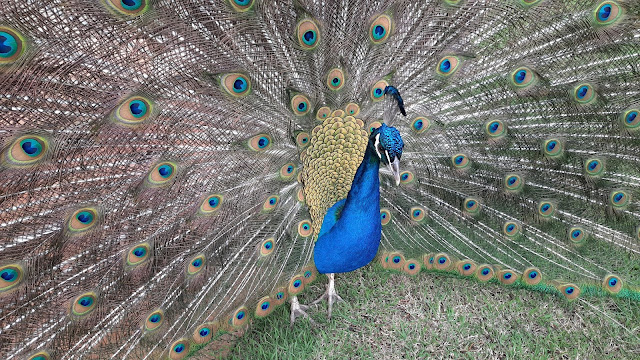 She would have to work too hard and success is unlikely. 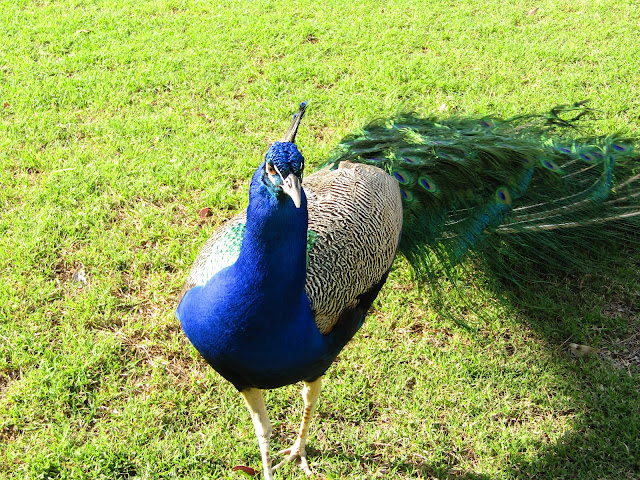 Instead, she mostly ignores him tail up and keeps on eating. 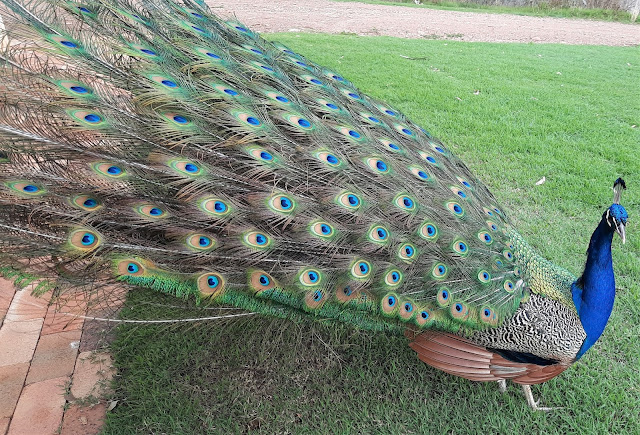 If Pops becomes too persistent, she sidles up against the house where a 3 metre train can’t go. 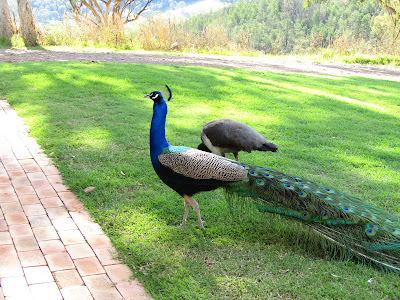 After hours of carrying the long covert feathers high and receiving no attention at all, Pops deflates his tail and scouts for insects in the lawn. 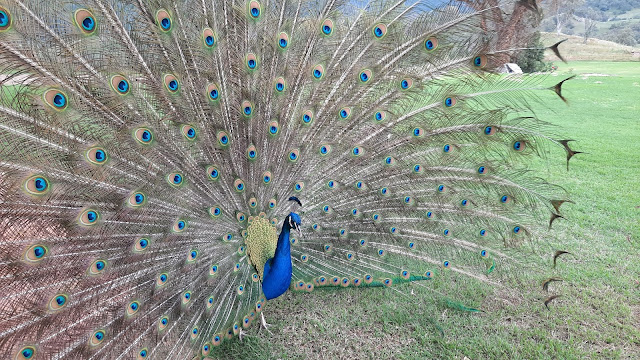 Though Pops has the hots for Poppy Peahen, it isn’t hot enough yet. 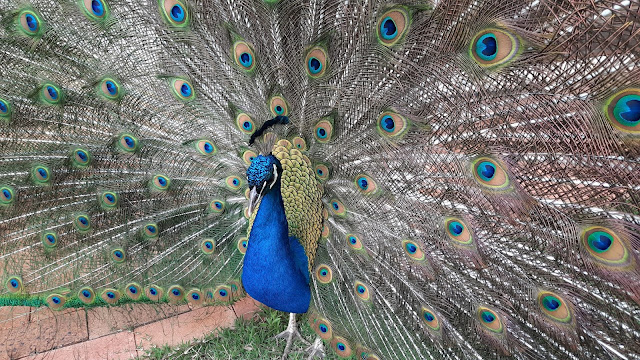 Maybe in November, or when breeding season begins in December. 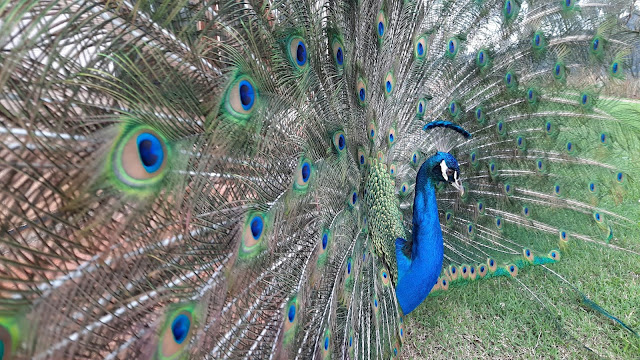 Pops dances slow pirouettes and chases her like crazy, the most amorous bird I’ve seen.

Doing the shimmy-shimmy shake and prancing beautifully, sometimes it makes the fan for me, my husband, the dog or really, just because it can. Pops seriously loves to be admired. 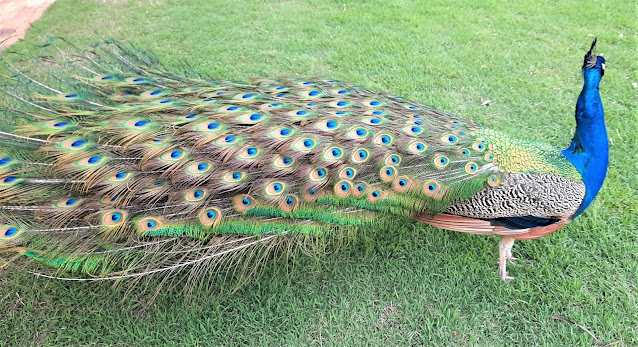 Here so long, it poses proudly for the camera. It might sound unbelievable, but the males and females camouflage well in the garden amongst leafy trees and shrubs. 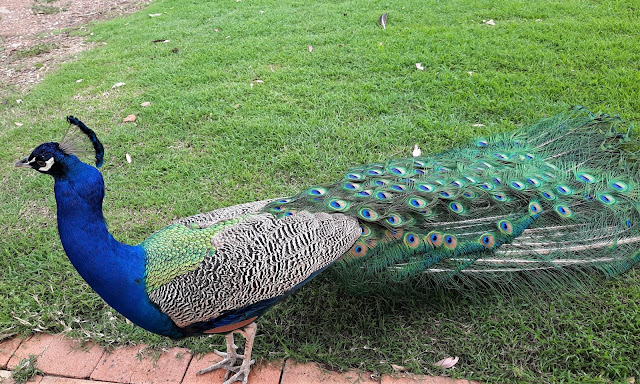 Pops hopes that flashing his iridescent eye feathers about will hypnotize Poppy so that he can quickly get it on. 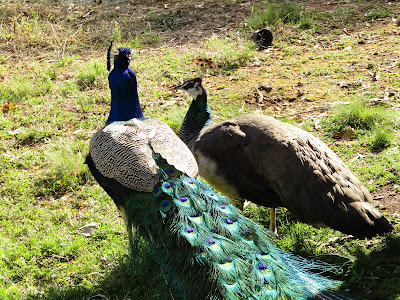 Indians believe the Peacock honking, hooting and crowing means it will rain.

Pops has been louder than ever this last fortnight, when we have had 5 inches of rain. 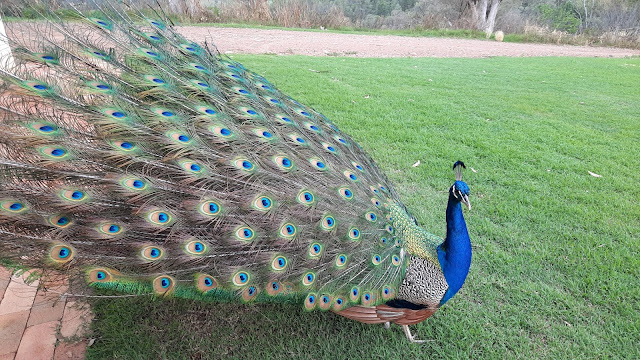 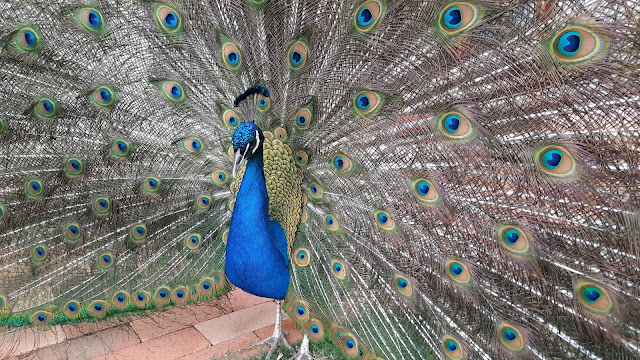 Trying to beguile his lady by constantly parading his gold, green and bronze plumes in the sun.

Poppy  walks away after a fleeting glance while Pops shimmering fan impresses any humans that see it. 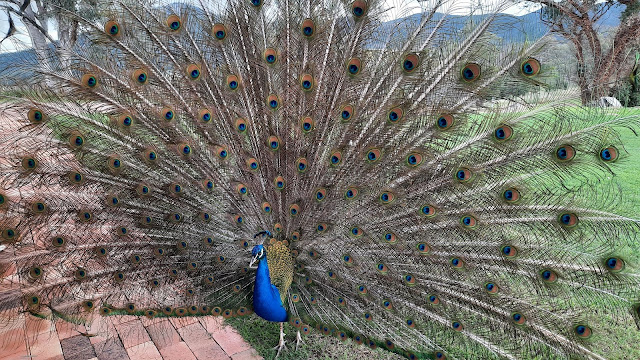 The female Indian Peafowl pretends not to be wowed but will succumb any day.

In the bird world persistence pays. 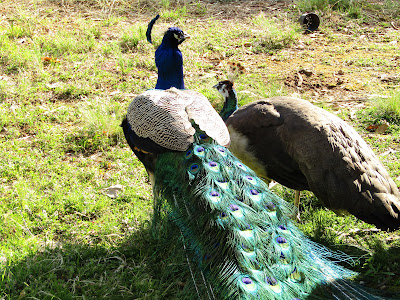 Until then she enjoys hogging all the food and being entertained with the most spectacular courtship ritual there is. 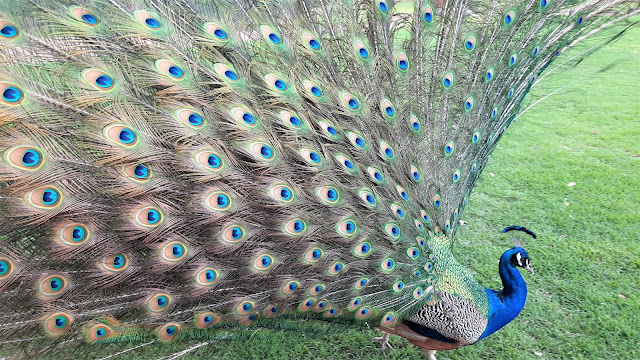 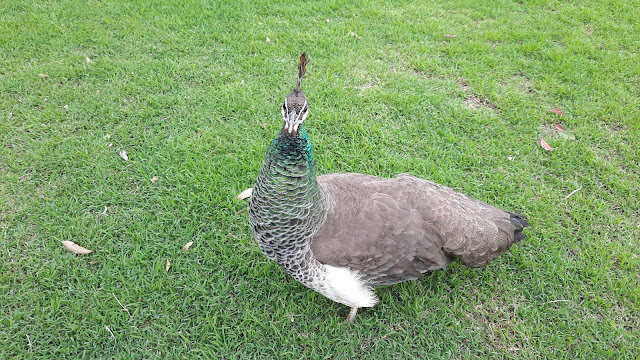 Can you imagine the discomfort of squeezing out up to 6 eggs then systematically starving yourself while sitting on the one spot for 28 days during the hottest time of the year? 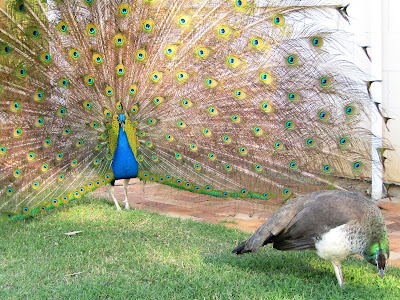 Poor Poppy and poor Pops, but they’ll both get their day in the sun I think.
Posted by Therese Ralston at 18:50
Email ThisBlogThis!Share to TwitterShare to FacebookShare to Pinterest
Labels: Bizarre bird behaviour, Courtship Displays, Peacocks, Poppy Peahen