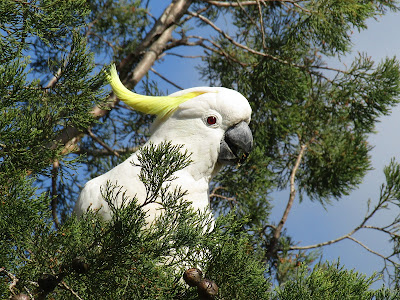 I’ve never watched the birds unclothed before. I was so focused on a young Sulphur-Crested Cockatoo out my bathroom window, I didn’t even grab a towel. 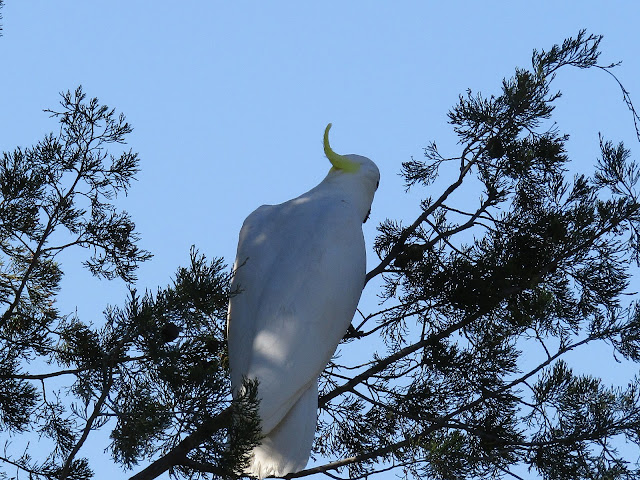 It was seven am and semi-dark on the south side of our house. I got out of bed to shower and saw the parrot lit by the new sun. 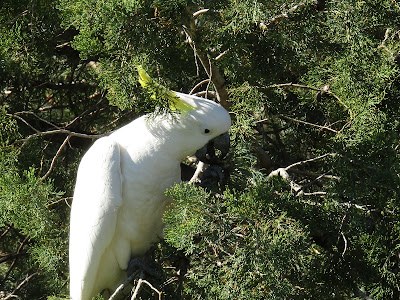 Feeding in a Cypress Pine Tree, it was holding each branch in one claw as if it had an ice-cream in its hand. 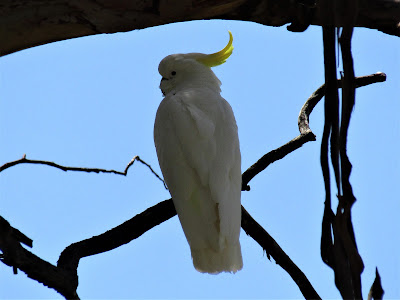 The pristine white feathers of the Cockatoo were in part shade. 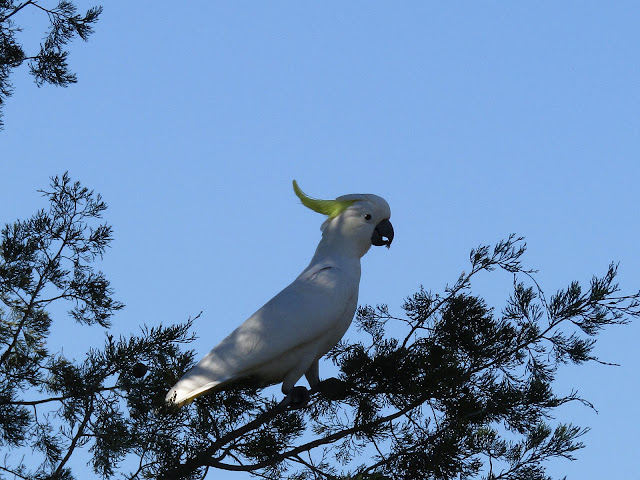 Except for a shower cap, I was naked, standing still and gazing at it. 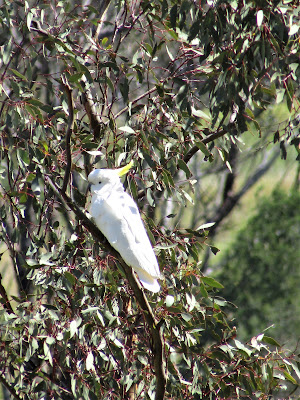 Communing with nature takes on a slightly different meaning when you’re in your birthday suit. But what they hey, it’s all-natural? 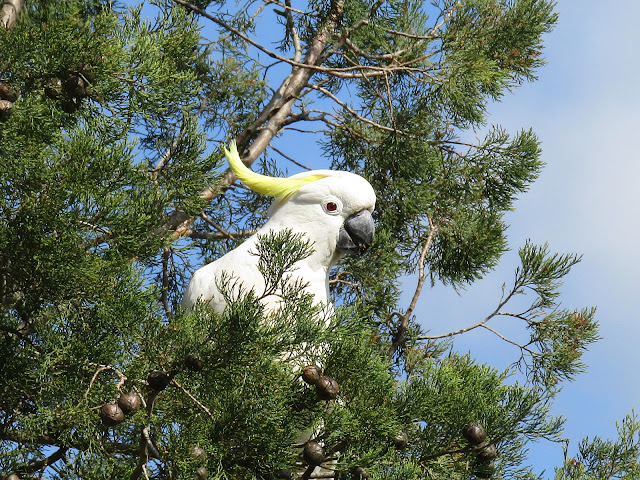 After a while I streaked through the house to grab the camera. The ‘Cocky’ as Australians call them, had become used to me peering out by then. The bird didn’t mind the photoshoot and I didn’t notice the chill. It jumped between branches and between trees as the morning brightened. 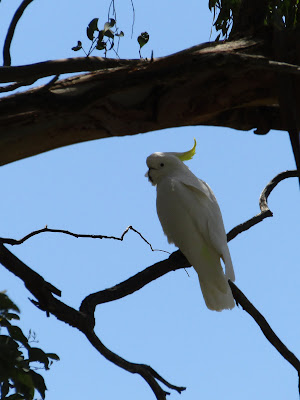 Still recovering from a broken wrist and unable to drive, there’s no way for me to get to work. I had nowhere to go, nothing better to do than stand around stark naked watching the Cockatoo nibble pine nuts. 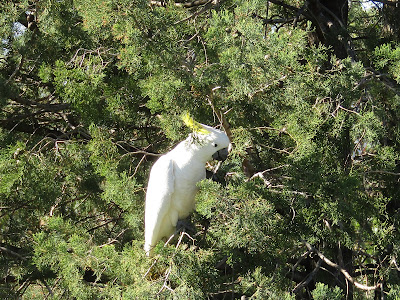 Once the bird flew, I gave an involuntary shiver. It was an unbelievable experience at the start of the first really warm blue sky spring day. 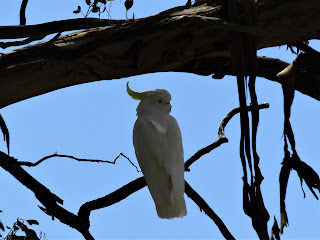 Does life get any better? 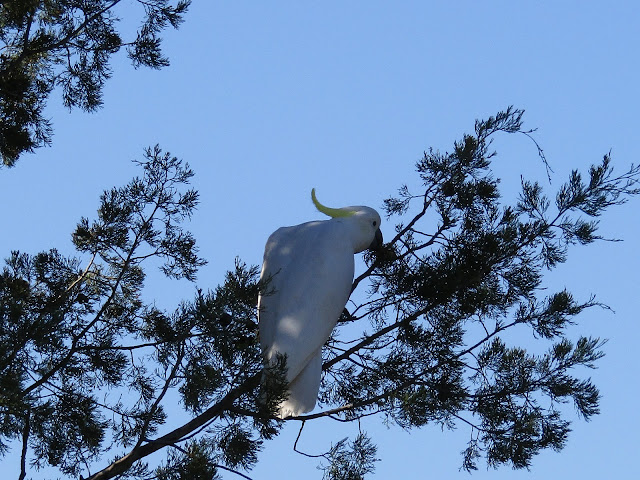 Looking into the Cockatoo’s clear ruby-red eye was awesome. Seeing the play of dappled light on the bird’s comb and feathers felt like an exclusive. 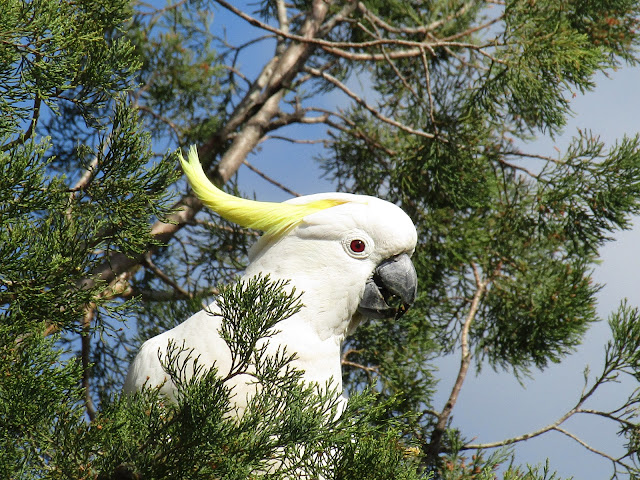 When the bird finally flew away it was twenty past nine but seemed like only fifteen minutes had passed. 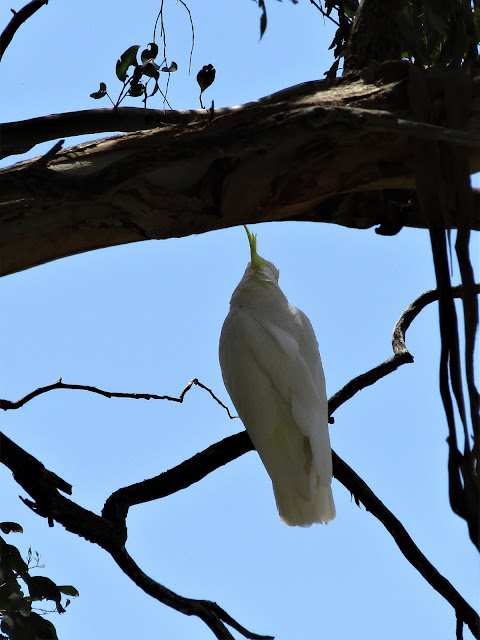 Lost in the moment with a Sulphur-crested Cocky was the best way to be, the best place to be on earth.

Posted by Therese Ralston at 20:02