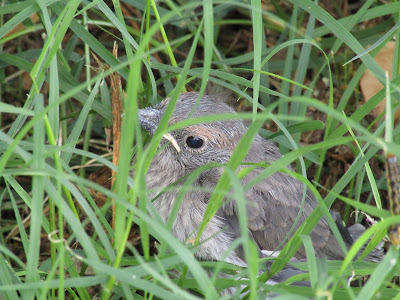 When Greedy first flopped out of the nest, he immediately flew 20 metres out of the garage. Directly into daylight over our driveway, he seemed shocked, simultaneously running out of steam and having a crisis of confidence. 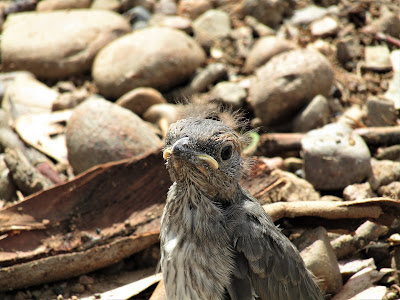 It was Easter Sunday morning, the perfect time for new life to rise up. Only he didn’t, he plummeted. All of 18 days since hatching from an egg in a nest in a toolbox on a shelf in the garage, Greedy had never been outside. Frightened by the light, he’d never seen the sky or trees or grass before. A lot to take in. 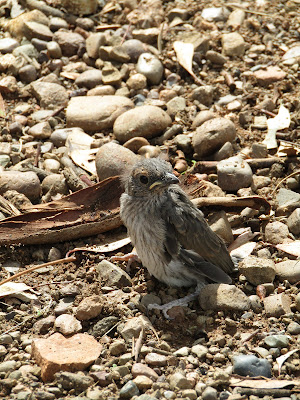 The baby Grey Shrike Thrush fell to the driveway exhausted. Perhaps he was overwhelmed by the difference from everything he’d previously known.

While he’d been exercising his tiny wings to practise for this moment, nothing could adequately prepare a fledgling for their first flight. 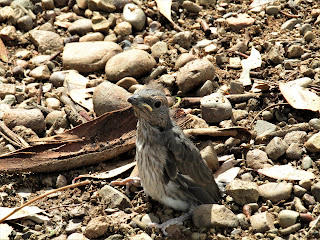 When any bird attempts a maiden voyage, the amount of energy required is enormous. The equivalent might be a year-old toddler trying to run a marathon a week after their first steps. 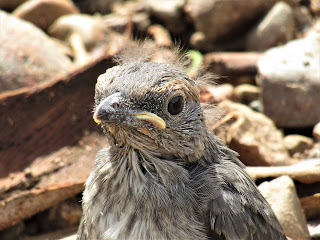 The term bird brain is used as a criticism, to say how dumb a person is. In reality, over 60% of any bird’s brain is dedicated entirely to the mechanics of flight-including take-offs and landings. 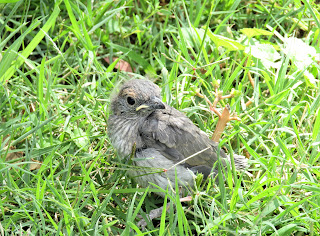 A bird is designed to take to the air, but the first time is never easy. It requires a supreme effort. In 24 hours the muscles, tendons, ligaments and hollow bones toughen up considerably. The bird can fly quite well then, if still only just above the ground. 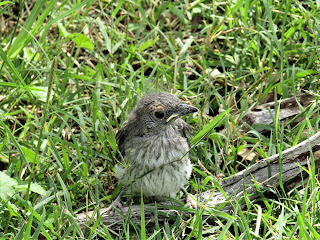 A longer tail and stronger wings are needed to soar high in the sky; the majority of that comes within days, looking transformed within a week of rapid growth. 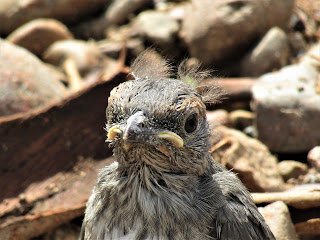 When Greedy crash-landed on the road a couple of weeks ago, his small bird body was exhausted. With few reserves of energy left, the bird could barely turn its head. Keeping the rest of its body still, the small Shrike-thrush looked around at our strange new world. 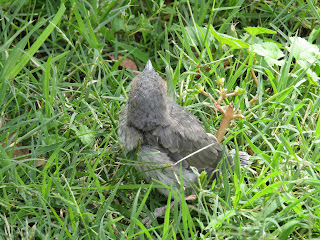 So different to the garage nest box, he was completely spent and stayed on the road for 8 minutes. Such a sweetie, I marvelled at what he had just accomplished and wondered what he was thinking.

Strong winds blew the downy fluff on Greedy’s head about; he seemed to experience cold for the first time. Looking at me, he hopped closer.

Though 5 metres away with the camera, I feared the chick might attach itself to me and backed off.


The little mite hopped onto the grass and tweeted for its parents. The single chirps it made were a locator beacon. Like radar, they told his exact position. 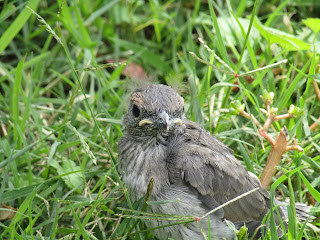 All fledgling chicks make this noise so parents can find them where they land.
Five minutes later Greedy chirped every other second; looking up to the gum tree for reassurance. 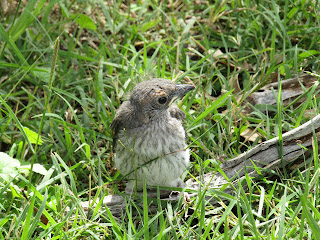 Thinking I should leave him to the parent birds, I filmed as the weeny fellow hopped into the grassy area beside the road.

This is the most vulnerable time for any bird. I wanted to stay and protect him, but that wasn’t my job. 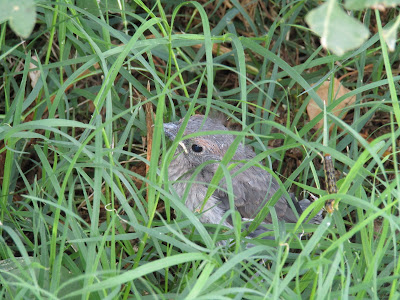 At the end of this video the father Shrike-thrush hisses at me for being there. The family was communicating, the parents making their meaning felt. Time for me to move away and leave Greedy on the most important day of his life.

After coming inside and gobbling a good deal of chocolate, I felt happy to hear the babe’s chirping along with the parents’ melodious whistles all day. 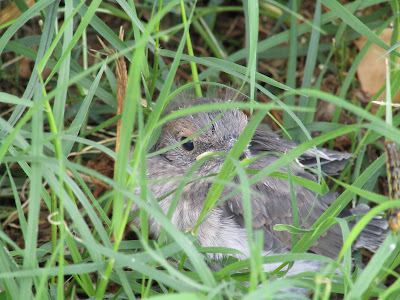 My husband says I’m over-thinking it. My daughter says I’m projecting human qualities onto the birds. I don’t know, but it sounded as if the parents were encouraging the first chick to hatch to fly alongside them. To get to the safety of the eucalyptus above, where they could shelter it from the wind and watch it closely. 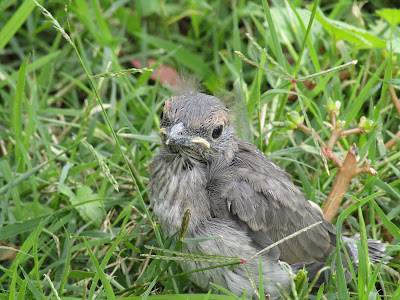 It was the most wonderful thing to know that this number 1 Grey Shrike-thrush chick was safely hidden in the grass. 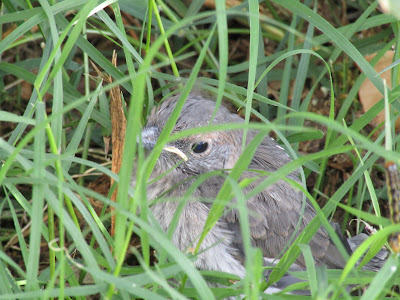 As always, it was a privilege to see Greedy’s first flight.

It was the best Easter present imaginable for a birder like me.
Posted by Therese Ralston at 23:49