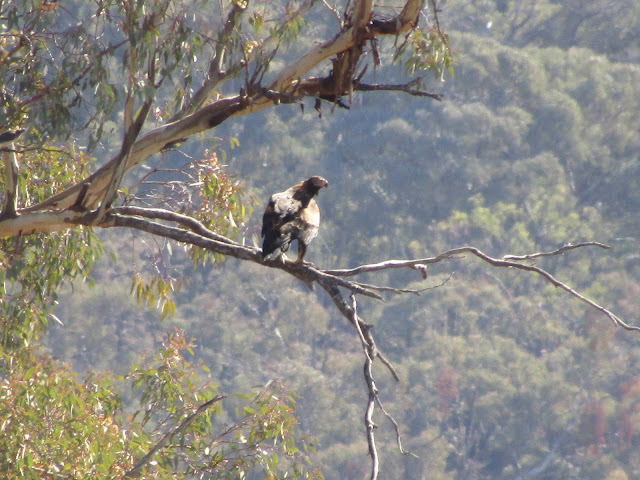 Weeks ago, out in the Can-Am with my husband, we saw 2 eagles gorging on a kangaroo. An ear torn off, brains out, intestines strewn on the ground, the kill was so fresh it hadn’t begun to smell.


We have five resident Wedge-Tailed Eagles, three brownish juveniles and two black adults. They probably killed the small roo working as a team. Not much was eaten. Once we got within half a km, the two eating flew up. 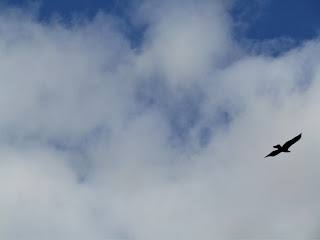 One flapped low to the ground while the other landed in the branch of a tree. The last bird to leave was so full it barely made it into the gum tree. If we weren’t there it would have stayed to digest its meal instead of lumbering away. 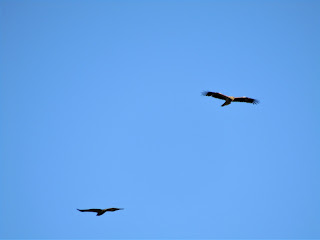 Eagles are hard to see flying 3 metres above dry plains grass. Despite being massive birds, they only weigh 4.2 kg. When they’ve stuffed themselves with a couple of kilos of meat, they become too heavy to fly. It is the only time you see these predators flapping.
The other eagles circled, trying hard to gain some lift with full bellies, struggling to fly even higher once I whipped out my camera. I live on the edge of a cliff which the eagles use to get their lift. There are five of them in a family group of 2 older adults and 3 juveniles.

They need the warmth of sunshine and strong easterly winds to
climb up into the thermals so they can hunt. I never see Wedge-tailed Eagles still or roosting in trees at the house. 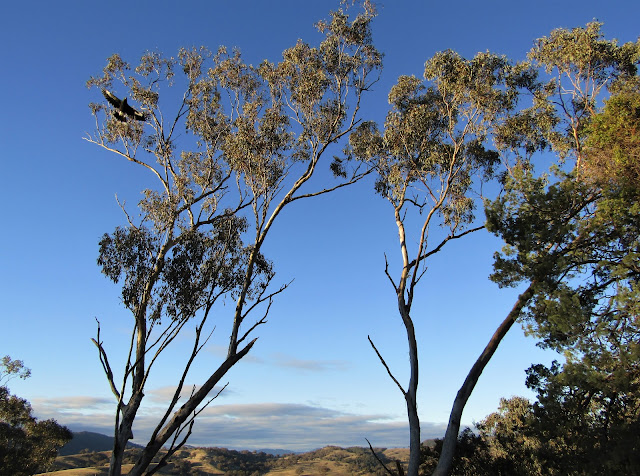 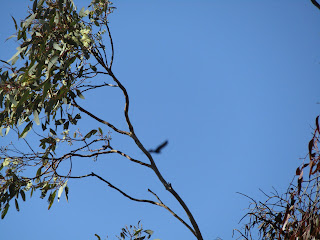 It is tricky to photograph them in flight because they move over 20 metres each second. Eagles soar past our place twice a week, but often weave in and out of the gums; something that makes it difficult to focus a camera. 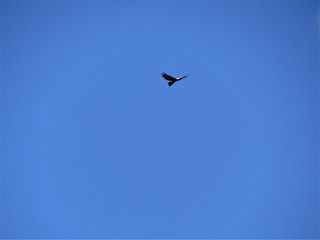 Eagles see almost 8 times better and further than we can, picking out moving prey from 6 km away. When I run around the house peering at them with binoculars, they see me in seconds, soaring into the sun to blind me. 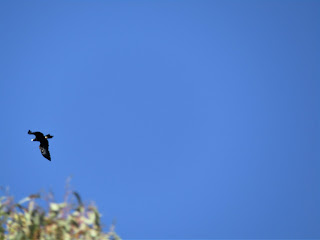 I have a collection of blue sky pictures without a feather in sight. Usually the Wedge-tailed Eagles in my photos are specks too small to see. 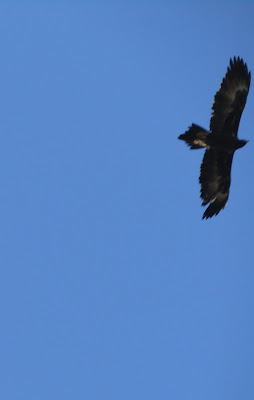 About a month ago I raced outside to snap a photo when a Wedge-tail swooped over. It must have been 5 m up, but I still ducked, clocking myself in the head with the camera as I crouched down, hands over my face.
My heart was thumping, my mouth was dry and my hair seemed to stand straight up. It’s looming shadow was terrifying; I finally understand how the the small birds feel being preyed upon.
I’ve seen these predators buzz a puppy before. One Kelpie called Sandy was a 12 week old kelpie when my husband left it on the quad bike for a moment. He turned back to see the eagle swoop over, claws extended, ready to snatch it up. 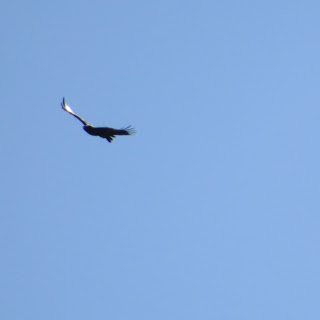 The bird changed its mind, but Sandy never forgot, hating eagles forever. Whenever one flew over he would bark at the sky. To tease him we just had to say the word eagle. He’d be jumping, barking and growling at the sky for the next 10 minutes. 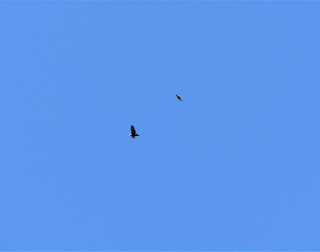 Wedge-tails are Australia’s biggest raptors. They have six finger feathers on wing-tips that stretch over 2 metres. Courtship is impressive because they mate for life and share nesting. Our  family group has the young of a pair; they don’t breed until 6 or 7.


Two weeks ago, on the windy dirt road home, I drove up to 2 juvenile eagles were eating road-kill. Where the track narrows, there was a cliff on one side and a vertical drop on the other. I slowed as the birds looked up. 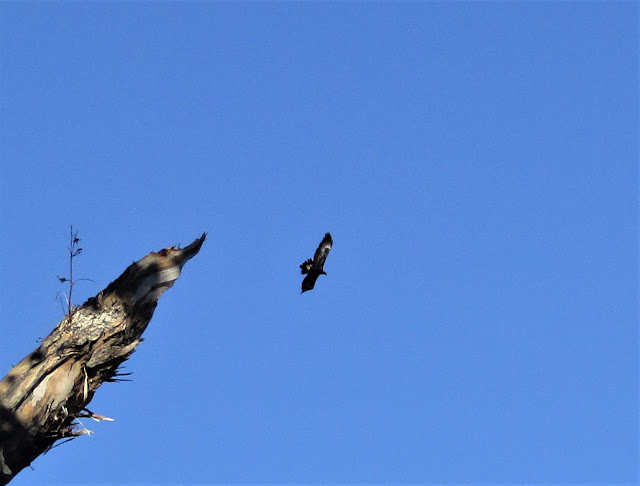 They had stuffed themselves silly and couldn’t fly. Like a jump jet, one bird hopped 3 m with both legs together before launching itself from a guidepost. When it took off over the edge, the body dipped down to just above the ground before landing on a gum branch. The other eagle was as gawky as an albatross on take-off, lurching over the bonnet of the car. I got to see caramel-brown plumage and splayed wings up close.
I thought that the encounter was as good as it gets, but I was wrong. 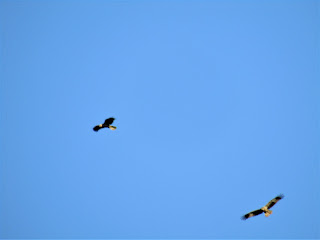 Heading home yesterday I saw 14 Wedge-tailed Eagles circling above the Recreation Dam. They were high in the sky. I parked and leapt out to take photos and they moved upwards and onwards.

I drove on, parked and tried taking photos from underneath again. Some adult eagles just circled, others flew erratically.

Too high to see well, one bird dived, rounded out and flew up again in a pothook mating display. None gripped claws and cart-wheeled down, but I thought they’d collide.


Two flew horizontally straight at one another as if they were playing a game of chicken. Just missing, they flew straight ahead and circled back for another go. The photos are pathetic, but the aerial courtship was amazing. 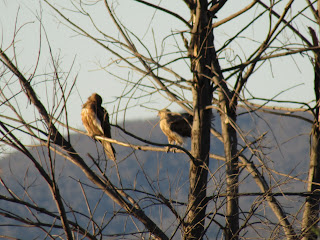 The sun was setting and my camera battery had one bar of charge when I parked at the car park at the dam entrance.

Looking down to the water, something moved in two dead old trees there. About the size of Falcons, 3 eagle chicks preened themselves on the branches. 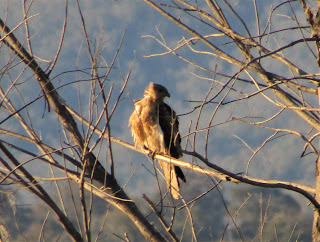 Wedge-tailed Eagles breed from June to August in Australia. Incubation takes 45 days and the young can fledge in 70 days. In the ongoing drought, June was very warm and dry this year. The baby eagles only squiggled along the branches and tried to hide. 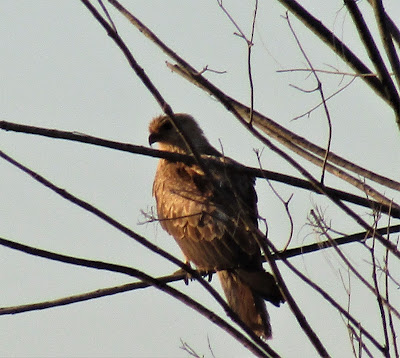 When taking a photo, a mammoth parent eagle flew out from the nursery tree and away. I hadn’t seen it at all, but it noticed me. Losing the light, I stayed watching the babes until long after my camera whirred to a stop. Even after dark, the 3 fledglings made no attempt to fly off.


Called an eyass, I’ve never seen raptor chicks before. They weren’t as awesome to look at as their parents, but I’m still buzzing from an experience even professional birders wouldn’t have too often. 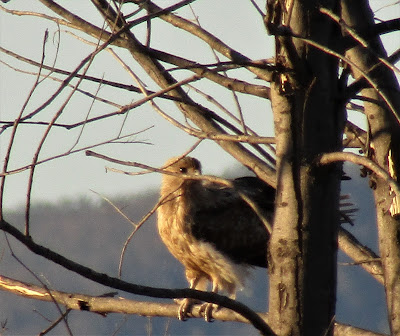 No jaw-dropping photos to show, just grainy, low light shots a real photographer would delete. I’m an ass putting eyasses and specks in the sky up on this blog, but being there was some kind of wonderful.

Posted by Therese Ralston at 18:52 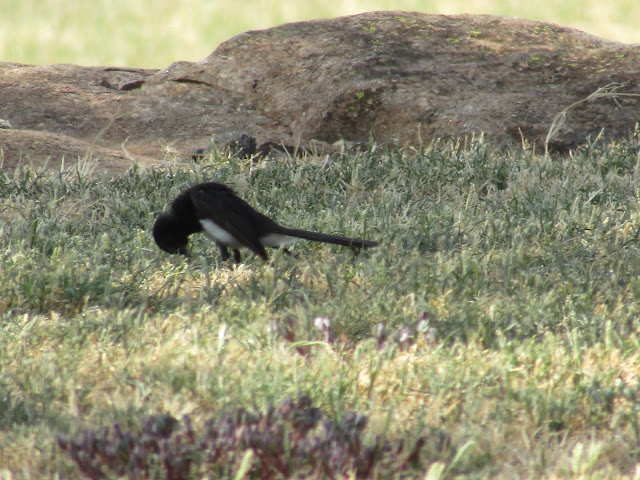