Welcome Swallows outstayed their welcome in my garden.

Storm clouds have built up all morning. Overcast, it’s been trying to rain. Thunder has rumbled away for hours, like a grumbling grandparent in an aged care facility. The Bureau of Meteorology says we’re in for a tempest with 40km winds. It’s not that bad, but I’m watching the final episode of ‘Stranger Things 2’ and hope that the wild weather waits until I catch the ending.
Binge watching three episodes when stormy weather was predicted wasn’t the best idea, but it’s too late. I am addicted, single-minded and utterly invested in the series. I must see what happens or die trying, though I’m guessing it will be another cliff-hanger. I might morph into a smaller, less green version of the not-too-incredible-hulk if the bad weather creates a power outage.
Phew, I have closure. Switching the TV off at the wall, I’m satisfied I saw the whole show. I unplug my laptop and secure outdoor chairs and tables so they don’t blow away.
I haven’t heard many birds since breakfast. It’s as if they are all tucked away in trees, waiting for the fury from the sky.
The rain is heavy. We shout interesting snippets from the newspaper out loud to each other because there’s no satellite Internet connection in storms. There’s hail, but it’s small snow pebbles like my mum once scraped out of her freezer before they invented frost-free units.
I’m energised by electrical storms. While they rage I get excited; fidgeting as if my body batteries are fully charged.
I watch massive gums sway through the pyramid roof. Rain falls in sheets, cascading down the glass like a fountain.
The house is darker than dusk. Grey-green clouds blanket the farm. We don’t usually turn lights on at lunchtime on a Saturday.
Afterwards, I head out to survey the damage. A fig tree in a terracotta pot has blown over along with the ladder Poppy Peahen stands on to feel all powerful. The mess is mostly scattered leaves and broken branches.
I release Rex from his kennel and kick the ball to him. The birds rejoice now the darkness has gone again. Not sure if they think it’s a new day, or are just happy the storm passed, but they fly like maniacs criss-crossing the roof line. 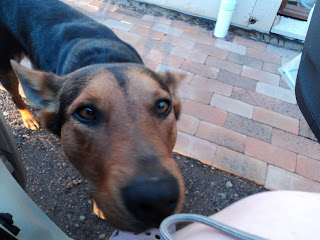 They’re the Welcome Swallows that nest in our eaves and in the garage roof beams. Like arrows, the birds glide three meters then flap furiously before darting away again.

I’m almost hit by a swallow that flaps so close to my ear I hear its wing-beats. Twenty fly erratically, circling the side of the house.
Until I see a swallow snatch an insect on the fly, I think they must be celebrating the rain. Another moth is snatched inches from my face. More swallows arrive as a haze of moths rise up from the garden. There are thousands, tens of thousands.

Above the patio, bird traffic is fierce and still more moths converge into new sunshine. At less than a cm, the moths fly straight up and away in one direction. The birds circle in wide sweeps, devouring without altering their flight path. Weaving in swift figure eights, I can’t believe they don’t hit each other.
These rusty Welcome Swallows swoop from behind or the side to attack so many insects the sky is hazy. Though the moths swerve, they can’t avoid being part of the bird binge. 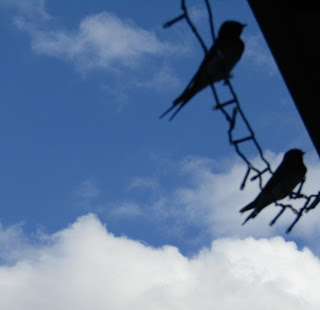 Swept back arrows of wings cover my garden The weave in and out of the eaves better than soccer players. Speaking of football, I’ve been ignoring the dog. Rex nudges the back of my shins. When I kick the ball; he dashes away to fetch it.
Swallows take the mobile feast back to the nest, regurgitating the moths to their babes. After a quick breather sitting on our fairy lights, the parents return to gorge again. The are relentless feathered bulimics, stuffing themselves silly and living up to their name. I must have seen half a million moths on flypast. No matter how many are snatched, more rise up from damp soil so fast they’ve misted the air grey.
It’s magnificent. I stay, despite Rex giving up on ball play and leaping up to try and snatch the last of the Swallows. Bending down, I hold onto a dog who’s as mesmerised as I am. The last birds fly low to the ground, weighed down by so many insects. Some settle in the gums; feeling full, they flap on the branches.
Eventually, the birds leave.
There are thirty, then twenty, then two.
Moths keep coming and watching is hypnotic. 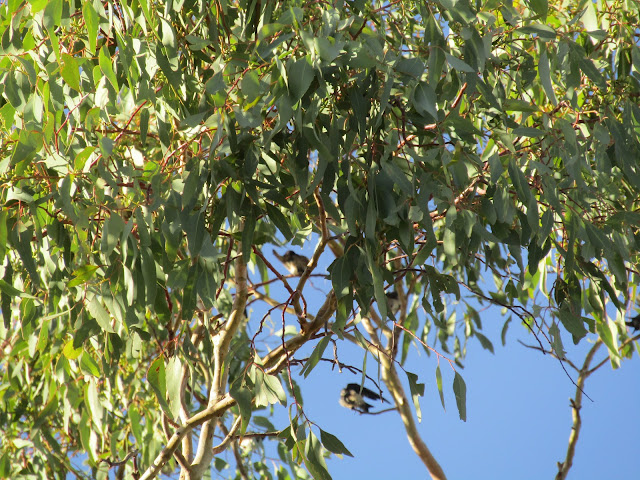 Posted by Therese Ralston at 18:11

Email ThisBlogThis!Share to TwitterShare to FacebookShare to Pinterest
Labels: Bird-loving, Feats of flying, Once in a lifetime event, Swallows