I’m playing fetch with Rex between watering plants. The dog sniffs the air, rushing towards a bird lying sideways. I hurl the ball away to distract the kelpie before he eats the window striker. 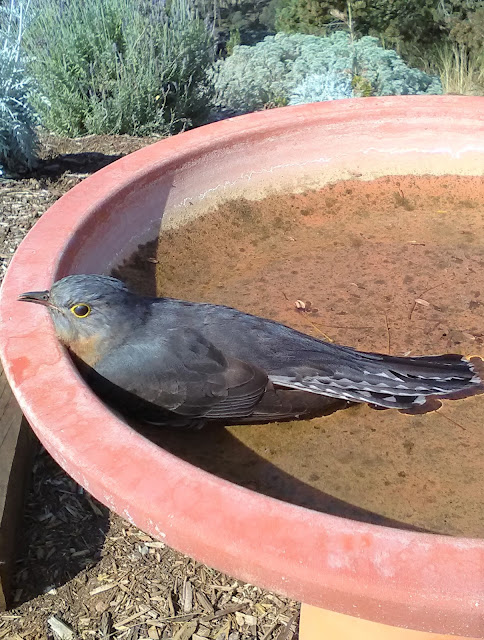 It’s a Cuckoo with a thin, high, broken-record call that drives me cuckoo of a morning. One that sings like a cheap plastic slide whistle; a chirrup that descends exactly the same way each time, repeated for hours from 5 am.
The peachy coloured breast rises and falls. It’s eyes are dull, the beak is open and it is barely alive. Picking it up, I can feel a faint heartbeat under warm feathers. Limp and floppy, it rests in my hand.
Rex is back and ready to play while the ball he’s dropped at my feet dribbles away. I carefully place the Cuckoo in the birdbath, its belly resting in the curve of the terracotta.

Seven White-winged Choughs crowded in this morning, draining and dirtying the water I was about to refill. Eyes circled with yellow rings stay closed. The Cuckoo stays motionless. 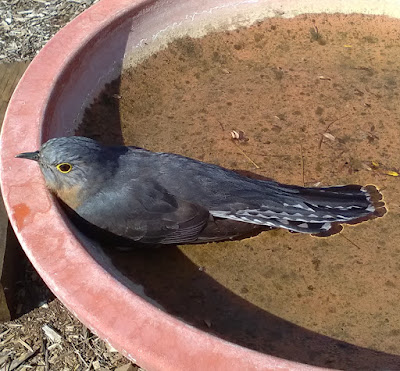 Grabbing the dog, I lead Rex back to his kennel. He doesn’t like it, but I want to save the Cuckoo.

With a fan tail barred with triangular markings, and grey wings with a white pinstriped edge, this is a beauty.

I dribble water over its beak, but nothing changes. Sitting in shallow water at the base should revive it.
I rush inside and grab the camera. The Fan-tailed Cuckoo’s eyes flicker. Dripping more droplets on it, the bird quivers and swallows at last.
By the fifth drop of liquid, the pretty fellow looks towards me. The Cuckoo stands, its breast puffing in and out while it blinks and wonders what happened. And, why its body aches so much after flying into a reinforced glass door it had no idea was there.
Those gold-rimmed Cuckoo eyes take me in. Startled, it hops up to the rim. Stepping back, I wait for it to fly. When it does, my heart soars with it.
Releasing the hound, I spend time throwing the ball to him. Most of an hour is spent encouraging him to fetch it back. It doesn’t matter though, I saved a Fan-tailed Cuckoo. And, even though its shrill trilling drives me mad, I think I’m a fan. 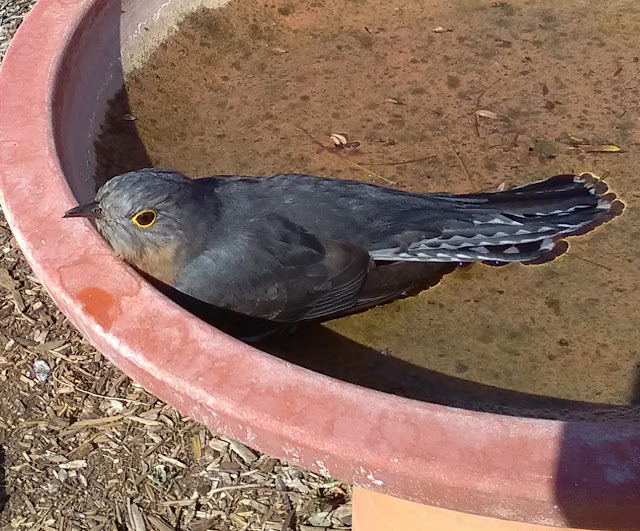 Posted by Therese Ralston at 22:58